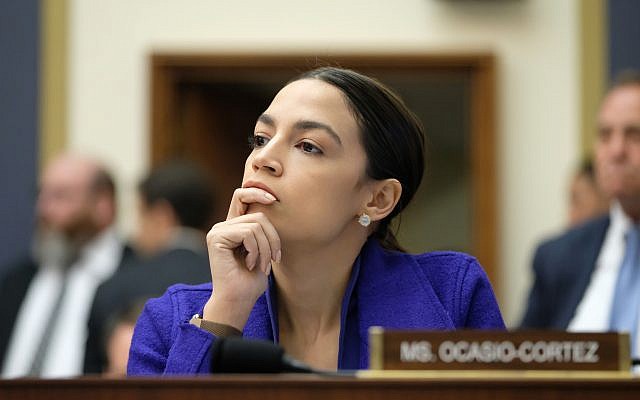 Rep. Alexandria Ocasio-Cortez (D-Bronx-Queens) this week described detention centers for undocumented immigrants on the southern border with Mexico as “exactly” like the concentration camps of the Holocaust.

What are Jewish Democrats to do in 2020? Many can’t bring themselves to even imagine voting for President Trump, for all he has done to show his support for Israel. And yet they are wary of popular young progressives in the party like AOC, in part because of shrill, offensive tweets and comments about Israel. Those Democrats must be feeling a bit more squeezed in light of the latest remarks from Ocasio-Ortez.

In an Instagram Live video on Monday evening, she referred to President Trump as a fascist, made comparisons between the U.S. today and Nazi Germany, and said “the U.S. is running concentration camps on our southern border, and that is exactly what they are.” She added: “I want to talk to the people that are concerned enough with humanity to say that ‘never again’ means something.” The conditions at the border are wretched enough without resorting to Holocaust imagery.

If “never again” indeed means something, it is that the uniquely horrific annihilation of 6 million Jewish men, women and children by the Nazis, in what has come to be known as the Holocaust, should not be appropriated to make political points in America.