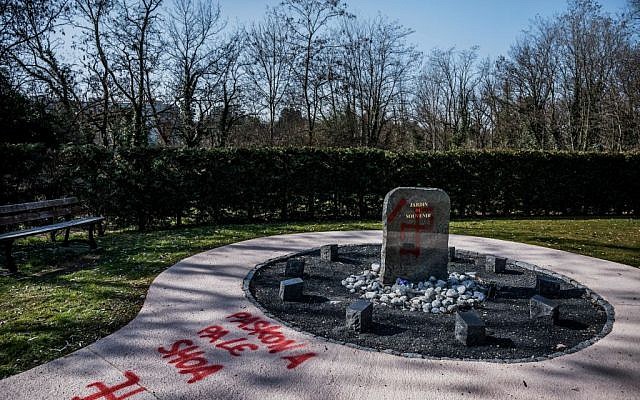 A photo shows swastikas at the stele of the "Jardin du Souvenir" (Garden of Memories) and the words "Paskon a pa le shoa" a play on words with the holocaust (shoah) sounding in French as "because we don't have the choice" after antisemitic graffiti was discovered in the Champagne-au-Mont-d'Or cemetery on February 20, 2019. Getty Images

JTA — A French rabbi says half of his regular congregants have left his city because of anti-Semitism.

“It’s a troubling phenomenon that began about 15 years ago,” Rabbi Nissim Sultan of Grenoble said in an interview Tuesday with the France Bleu Isère radio station. “I mean the departure of half the people who make up the core of our community. They left to Israel, elsewhere in France, the United States and Canada.”

Each anti-Semitic graffiti, he said, “raises awareness to a global reality that means we fear for our children at school, on the street. So as responsible parents, we take measures.”

Grenoble, an eastern city of 160,000 near Lyon, has several hundred Jews.

Approximately 20,000 French Jews have left for Israel since 2014, a major increase over the previous four years. Amid a substantial increase in anti-Semitic hate crimes, thousands more have immigrated elsewhere. Many thousands more have stayed in France but moved to what they deem as safer neighborhoods.

Last month, authorities temporarily shut down the Al-Kawthar Mosque in Grenoble due to the preaching of hate and incitement, including against Jews, by imams there, the Le Dauphine news site reported.