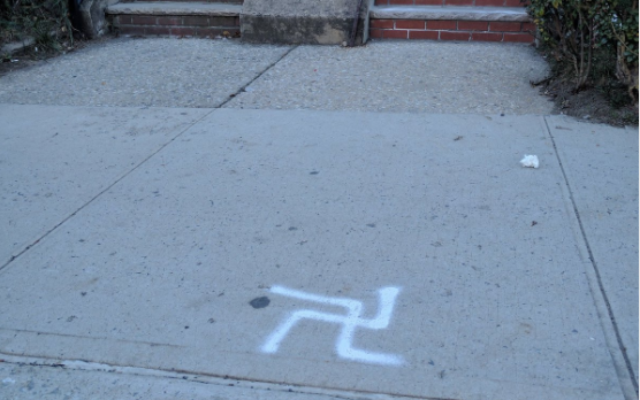 A swastika was found spray-painted on a Crown Heights sidewalk earlier this year. Just one of the many incidents reported in NY as of late. Twitter/@Mottel

The words “No Jews” was spray painted from floor to ceiling on the walls of a home for sale in Rockland County, New York.

Anti-Semitic messages also were painted throughout the home, including in the kitchen and on the floors. The graffiti was discovered in the empty home, which is for sale, last week, by a home inspector who was checking on the structure for a couple that wished to purchase it.

The inspector was acting on behalf of an Orthodox Jewish couple, CBS New York reported.

The Haverstraw Police told local media that the incident is being investigated as a hate crime.

The Anti-Defamation League condemned the anti-Semitic attack “which was designed to send a message of fear and intimidation not just to the victim, but also to the broader community,” said Evan R. Bernstein, ADL New York regional director, in a statement. “The vandalism of a home for sale in a county with a rapidly growing Jewish community sends a deplorable message that Jews are not welcome. We expect that community leaders and elected officials will make clear that all are welcome in Rockland and that anti-Semitism and bigotry have no place in our communities.”

In November, 2016, the words “No Jews” were spray-painted onto a realtor’s sign and two vacant homes some three miles away from where last week’s incident occurred.