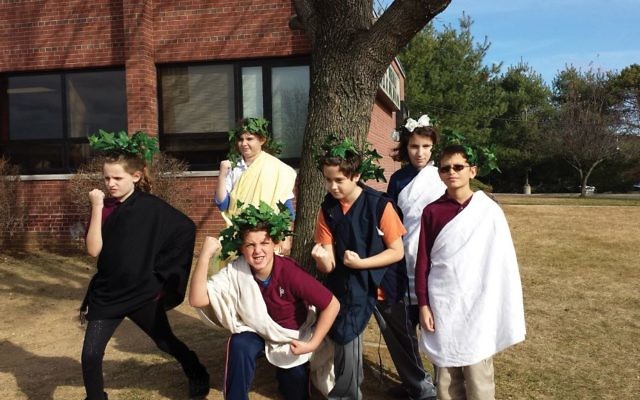 Students at The Jewish Academy in Commack. “You can create the best product in the world,” says Rabbi Tuvia Teldon, “but if no customers come it does not make sense to stay open.” Courtesy of The Jewish Academy

Citing a dearth of students, The Jewish Academy in Commack, L.I., will be closing its doors June 23 after 13 years.

“It’s not from a lack of money to cover educational expenses, it’s because of a lack of interest,” said Rabbi Tuvia Teldon, a board member.

That was the same reason given for the closing in 2008 of the Solomon Schechter School of Suffolk County, which, like The Jewish Academy, was housed in the Suffolk Y JCC. It had been in operation for 26 years.

“It’s not from a lack of money to cover educational expenses, it’s because of a lack of interest.” – Rabbi Tuvia Teldon

The founders of The Jewish Academy believed they would succeed in attracting students if they offered a superior education. To do that, they bought state-of-the art educational tools and teamed up with Stony Brook University, whose students were enlisted to teach principles of science, technology, engineering and math through funding from the National Science Foundation. And the school partnered with Touro Law School in Central Islip to develop a curriculum in law.

It also hired as its dean Shimon Waronker, a chasidic Jew from Chile who earned his doctorate from the Harvard School of Education and gained prominence in the academic world for his innovative model of education.

“It is inquiry-based and it uses a team approach,” said Chaya Teldon, the rabbi’s wife who serves as the head of school. “Students are empowered to take control of their education. … My parents sing the praises of the school.”

But as Rabbi Teldon observed, “You can create the best product in the world, but if no customers come it does not make sense to stay open.”

In its 13 years, The Jewish Academy, which previously leased space in East Northport from the Commack school district, educated about 200 students. Its largest class of 72 students was about five years ago. But enrollment has steadily declined and is now down to 25.

“There is a certain level of commitment needed to want to send a child to a Jewish day school,” Rabbi Teldon said. “Public schools here are excellent and they offer a certain social dimension as well. If you go to day school, you don’t have that. In addition, taxes here are high and a lot of young families are not in a position to pay taxes and tuition – even though we don’t turn people away. But a lot of people don’t want to accept scholarships.”

About 60 percent of The Jewish Academy’s students over the years have received scholarships. Tuition was $10,000 a year for kindergarten and $14,000 a year from first through eighth grade.

UJA-Federation of New York’s 2011 Jewish population survey found that the Jewish population in Suffolk slipped to 86,000 from 98,000 over a 20-year period. However, in the Commack/East Northport/Huntington area in which The Jewish Academy is located, there was a 50 percent increase in Jews over the prior 10 years.

In addition, the survey found that the Jewish population in Suffolk has a lower level of engagement with Jewish institutions and is aging.

Rabbi Teldon said that in the last several years, he found that only about 10 percent of his students were Orthodox, half were “not religious” and 10 percent were from intermarried families.