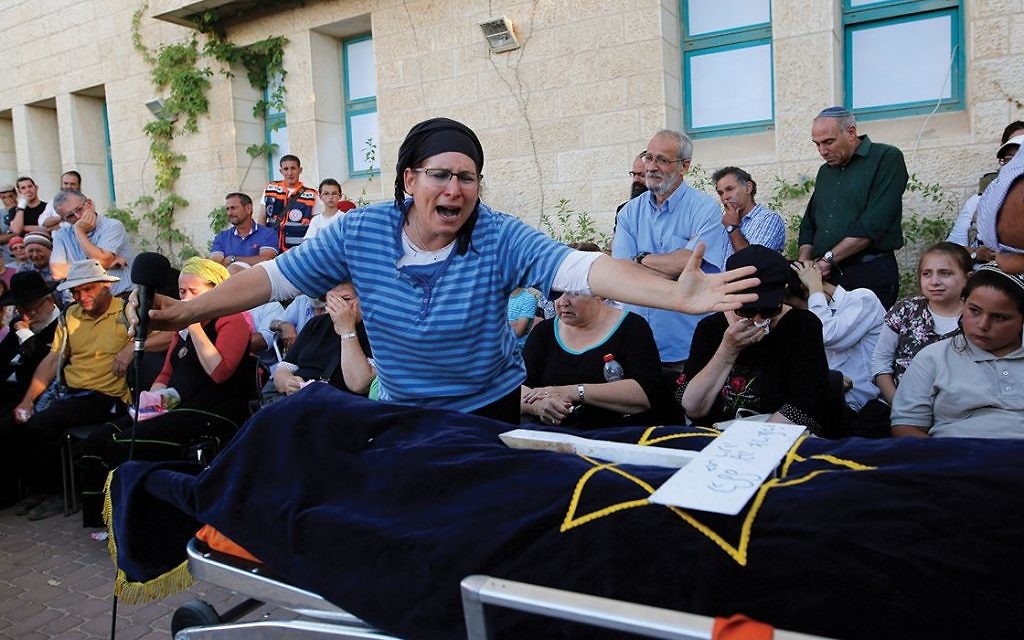 Kiryat Arba, West Bank — The pair of youths leaving the shiva house for Hallel Yaffa Ariel had an urgent message for their peers.

Just a few days before, the 13-year-old girl was murdered in bed by a Palestinian assailant who had infiltrated the Jewish settlement and climbed in through the bedroom window — a terrorist attack that shocked Israel. Now the two youths were calling on their friend to help them leverage the national sympathy and re-establish a nearby hilltop settlement outpost — Mitzpeh Avichai — that had been evacuated several times by the Israeli army.

“When there’s a murder of a girl from Kiryat Arba,” one of the youths said, “we need to respond with building and action. And the moment that you break through more [to new building], you are less concerned with fears and staying home. Once the youths are doing something, we can get over the fear [from the attack].”

Amid the upsurge in Israeli-Palestinian violence that followed the killing of Ariel — a father of 10 from a nearby settlement was killed in a drive-by shooting the next day — the issue of settlement construction surged to the forefront once again in Israel.

For right-wing supporters of Benjamin Netanyahu’s coalition government, new settlement building is dubbed “a fitting Zionist response” to violence — the most visceral demonstration to Palestinians in the West Bank that the Israeli presence in the Judean and Samarian hills will only expand. During the Israeli security cabinet discussions on how to handle the upsurge of attacks, Netanyahu came under pressure from right-wing ministers to announce a new wave of building in the settlements, according to Haaretz.

The announcements triggered criticism in the international community as well as in Israel.

An editorial in the liberal Haaretz newspaper called the building announcements “a cynical exploitation of the terror wave to ‘punish’ the Palestinians and mollify the extreme right wing.”

United Nations Secretary General Ban Ki-moon said in a statement that the move raises “legitimate concerns about Israel’s long-term intentions, which are compounded by continuing statements of some Israeli ministers for annexing the West Bank.” On Friday, the Quartet of peace process sponsors — the U.S., the European Union, Russia and the U.N. — released a report on negotiations saying that settlements construction is “steadily eroding the viability of the two-state solution.”

Back in Kiryat Arba, at the shiva house for Hallel Yaffa, a lawmaker from the pro-settlement Jewish Home party called on the government to go beyond the 42 housing units promised the day after the attack.

From the rear porch of the Ariel household, Shuli Mualem, a pro-settler legislator demanded an expansion of “all parts” of Kiryat Arba. “Every effort to move us from here should be met with more building,” she said. “Restoring security can be accomplished by adding more and more neighborhoods, and allowing Jewish kids in Kiryat Arba to wander freely and to sleep soundly in their houses.”

In another room, Kiryat Arba’s mayor, Malachai Levinger, discussed the need to build out Kiryat Arba’s neighborhoods to include the Ariel house.

The cottage stands alone on an unnamed dirt road on the edge of Kiryat Arba’s housing clusters, and several hundred feet away from the army’s security fence perimeter that was infiltrated on Friday. Land experts from pro-peace groups said that the house is located outside of the areas slated for settlement housing, in an area that the military declared as a special security buffer to protect Kiryat Arba, and is very likely privately owned by Palestinians.

Hallel’s mother, Rena, blamed government “bureaucracy” for the lack of building around the house.

“Somebody has to be here,” she said. “If we won’t be here, the Arabs will be here. It’s very simple.”

A family acquaintance at the shiva who asked not to be named said, “They planted vineyards here without asking anyone whose land this is. It’s a statement saying, ‘This is our land.’”

Though Israel’s current government is often dubbed the country’s most right-wing coalition ever, there hasn’t been a dramatic upsurge in settlement expansion. There has even been a slowdown in the push to advance new building plans. But despite that planning pipeline slowdown, building activity continues apace and the government already has plans approved for 30,000 housing units. The 1,800 housing starts in 2015 marked a 15 percent increase over the five-year average between 2009 and 2013.

What has changed, according to watchdogs, is that the government has gradually started to retroactively legalize Israeli building in the West Bank in order to avoid evacuations of the unauthorized settlement outposts.

“Construction on the ground continues,” said Hagit Ofran, a settlement-building monitor at Peace Now. “The fact that there were no new master plans is not changing the fact that on the ground, they have enough to build.”

But now, the pro-settlement lobby wants Israel’s government to go beyond settlement building and actually annex some of the settlements — something that Israeli governments since 1967 have avoided doing. The Knesset’s “Land of Israel” lobby held a conference on Sunday in Maaleh Adumim to ratchet up pressure on Netanyahu and the coalition to pass annexation legislation.

Unlike many far-flung, isolated settlements, Maaleh Adumim is part of the Israeli “consensus,” said Likud minister Zeev Elkin, and the purpose of the conference was to start a “serious discourse” on extending Israeli sovereignty to the settlement. Speaking to Israel Radio, Elkin continued, “In Judea and Samaria we haven’t moved one millimeter in asserting our claims to sovereignty.”