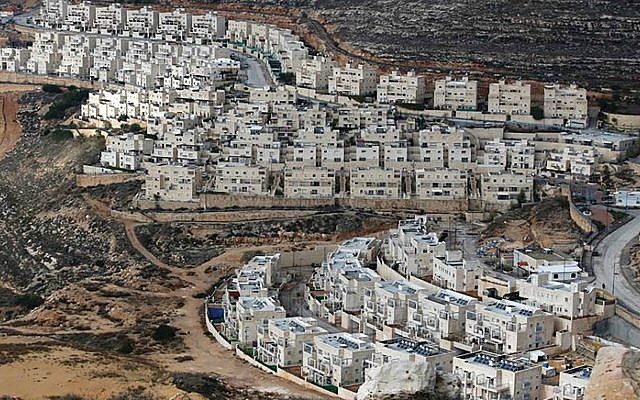 An Israeli settlement in the West Bank. Annexation could exacerbate tensions between Republicans and Democrats. Getty Images

The very suggestion by the U.S. ambassador to Israel that the Trump administration might approve of Israel unilaterally annexing portions of the West Bank — a move that would signal a dramatic policy shift — has raised the possibility that Israel might become an even greater wedge issue dividing Republicans and Democrats in the 2020 election.

“Instead of Israel bringing people together in a bipartisan way, it may now be seen as Democrats not being sufficiently supportive of Israel,” said David Makovsky, director of the Project on Arab-Jewish Relations at the Washington Institute for Near East Peace.

Although Israeli Prime Minister Benjamin Netanyahu promised just two days before Israel’s election last April to annex all West Bank territories in which settlers now live, his failure to form a new government has meant there will be new elections Sept. 17 and Netanyahu is expected to restate his annexation pledge.

“The Republicans would say he is annexing areas [considered a part of Israel in any peace accord],” said Makovsky. “My bigger fear is that the Republicans might … turn this into a wedge issue, which would be terrible.”

In fact, U.S. approval of Israeli unilateral annexation of any part of the West Bank would mark a major shift in both American and Israeli policy, which for decades has been predicated upon the principle of two states for two people. Should Israel or the U.S. deviate from that, it would become political fodder in the U.S., a fact already pounced upon by Democratic supporters of Israel.

In a joint statement April 12, Democrats Reps. Eliot Engel and Nita Lowey, of the Bronx and Westchester/Rockland, respectively, Ted Deutch of Florida and Brad Sherman of California spoke of their support for a two-state solution and said they were “greatly concerned by the possibility of Israel taking unilateral steps to annex the West Bank.”

“We hope that any security measures are implemented within the context of preserving the eventual possibility of a two-state solution,” they said. “Two states for two peoples, negotiated directly by the two sides, with mutually agreed upon land swaps, is the best option to achieve a Jewish, democratic, secure Israel living side-by-side with a democratic, de-militarized Palestinian state. … Our fear is that such unilateral steps — whether from Israelis or Palestinians — would push the parties farther from a final, negotiated settlement.”

But Ronald Krongold, a board member of the Republican Jewish Coalition, questioned why Democrats should tell Israel what is best for Israel.

“We wouldn’t tell Germany what to do on its borders, or Great Britain to take over Ireland or Scotland or how to treat its neighbors,” he told The Jewish Week. “What right do we have to tell Israel? … My feeling is that the Israelis live in the area and therefore know what is best for their country. The problem is that the people in the Democratic Party are leaning so far left that they don’t understand the situation in Israel and have on rose-colored glasses as to how the Palestinians will react to any solution.”

The possibility of Israeli annexation of part of the West Bank has already become an issue in the 2020 presidential election. Shortly after the U.S. ambassador to Israel, David Friedman, told an interviewer earlier this month that Israel is “entitled to retain some portion” of the West Bank, Pete Buttigieg, the South Bend, Ind., mayor seeking the Democratic presidential nomination, said that should annexation take place while he is president, “American taxpayers won’t help foot the bill.”

Friedman declined to say how the U.S. would respond if Netanyahu unilaterally moved to annex West Bank land. Among the considerations, he said, are how much land was to be annexed, “on what terms, why does it make sense, why is it good for Israel, why is it good for the region, why does it not create more problems than it solves. … I don’t want to prejudge.”

In truth, Friedman really said nothing new, according to Shoshana Bryen, senior director of the Jewish Policy Center in Washington, D.C., who pointed out that “the last four U.S. presidents all understood that there would be changes in Israel’s border when a [peace] agreement” is reached with the Palestinians.

“Annexation is not a dirty word,” she told The Jewish Week, noting that United Nations Security Council Resolution 242 unanimously adopted in 1967 calls for both Israel and the Palestinians to “live in peace within secure and recognized boundaries ….”

“Anytime there are attempts to find a secure boundary, there is going to be annexation and land swaps,” Bryen said. “But if one side says ‘I will take it all,’ that would be outside the parameters and Friedman never used the word ‘annexation.’ … The U.S. has always made it clear that the secure boundaries to which Israel is entitled is not the 1949 armistice line [pre-1967 border]. [Barack] Obama said there would be one-to-one land swaps and [Bill] Clinton talked of Israel retaining the settlement blocs. Israel has said that 85 percent of the settlers live in 15 percent [of the West Bank].”

Dennis Ross, the special Middle East coordinator under Clinton and now a fellow at the Washington Institute, recalled that “we came up with the concept of ‘settlement blocs plus’ in the spring of 2000, and it meant that Israel would annex 5 percent of the territory closest to the Green Line [pre-1967 border] where most of the settlers lived, and then there would be land swaps.”

Asked about the American political ramifications, Ross said the Trump administration “would be supportive, responding to what Israel wants as opposed to what Israel needs. Clearly, there will be some Democrats who would be critical because of their reaction to Trump if nothing else … and it would make it harder to get a negotiated outcome. In the end, Israel will decide what it is going to do. If you support Israel, there are positions you can question and this would be one of them.”

Israel has always been an issue in U.S. politics and it will be even more so as “Israel moves further and further to the right and Prime Minister Netanyahu continues his warm embrace of Donald Trump, who is strongly disliked among Democratic voters,” observed Hady Amr, a non-resident senior fellow at the Brookings Institute who served as U.S. deputy special envoy for Israeli-Palestinian negotiations from 2014-2017.

“Prime Minister Netanyahu has succeeded in making Israel-U.S. relations a partisan issue in the U.S.,” he said. “His disrespect of Obama, his embrace of Trump, saying he will apply Israeli sovereignty to all of the settlements, and saying that Israel is the state of Jews alone — these are policies that don’t fit well with the Democratic base or the Democratic leadership. … Israel and the Palestinians can have two states or live in one mess and I think that reality is deeply understood by the Democratic leadership in the House and Senate and the presidential candidates and instinctively by Democratic voters.”

Although the Jewish Council for Public Affairs is also supportive of a two-state solution, its president and CEO, David Bernstein, said the “issue of annexation is on our radar screen. … Without a doubt, this issue will be used as a political football in both the Israeli and U.S. political elections. Israel and anti-Semitism have proven themselves to be effective wedge issues and they could prove to be the same in this election.”

At the end of the day, “the majority of Democrats and elected officials do support Israel and that support will continue,” said Rabbi Abraham Cooper, associate dean of the Simon Wiesenthal Center. “Will they support it in the same way this president does? That is not clear because no one right now in the Democratic field [of presidential contenders] is focusing on foreign policy.”