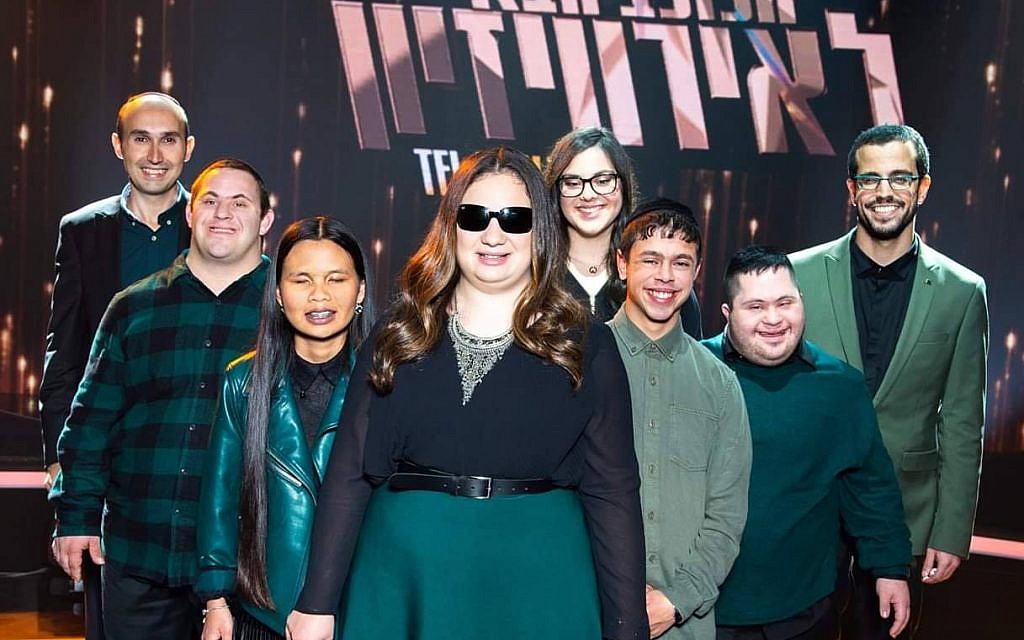 For the past two months, Israel has been abuzz about the Shalva Band. They were competing on the reality show “Hakochav Habah,” a show similar to American Idol. Week after week, the Shalva Band kept advancing. Suddenly, when they reached the finals, the band withdrew.

The Shalva Band is comprised of exceptionally talented musicians who happen to be disabled. The two lead singers are blind, as is the keyboardist, and the drummers have Down’s Syndrome and William’s Syndrome. The genesis of this unique band was at the music therapy program of “Shalva,” an Israeli organization that provides therapy, respite and advocacy for persons with disabilities. The music therapists there organized the participants into an amateur band. Last year, they thought it might be an interesting adventure to try out for “Hakochav Habah” without having serious expectation of making it through to the finals. But, as it turns out, they were wrong. The band won the hearts and respect of the judges and fans, and quickly rose to the top of the competition.

The band members carry themselves with a gentle warmth that belies the challenges they have faced in their young lives. Like many disabled people, they had long labored in the shadows; now, they found themselves on center stage. Week after week, they put in remarkable performances, and it started to look like they might win the contest. They were on the cusp of a remarkable triumph, and a validation of Shalva’s goals.

Shalva has been the lifework of Kalman Samuels. In 1977, his son Yossi became blind and deaf as a result of a contaminated vaccination. Experts agreed that Yossi was ineducable and should be institutionalized. But Kalman’s wife Malki refused, and vowed that if God helped Yossi, she would dedicate herself to children with disabilities. When Yossi was eight, a dedicated educator made a breakthrough that allowed others to communicate with Yossi by finger-spelling words on his hand. Malki then turned to Kalman and told him they had a vow to fulfill, and it was time for Kalman to quit his job and start a program for other children like Yossi.

In less than thirty years, Shalva has grown into an institution that serves thousands of disabled children, with a mission of inclusivity into the mainstream. The success of the Shalva Band has taken this mission to all of Israel. Parents of disabled children have reported a change in attitudes in the past few weeks: their children, who used to play alone, have begun receiving invitations for playdates and birthday parties.

When the Shalva Band was chosen as a finalist on “Hakochav Habah,” an unanticipated obstacle came up. The winner of “Hakochav Habah” would represent Israel at the international Eurovision contest. Eurovision rules require all acts (from over 40 countries) to participate in a Friday night dress rehearsal, something that Orthodox Jews cannot do on Shabbat. The Shalva Band has both secular and religious performers. The band had never imagined that they could win, but now winning posed a serious problem. They searched for solutions, and even considered having the secular members continue on their own. In the end, they concluded that they would rather stay together even if it meant leaving the competition as a group.

The Shalva Band has made an enormous sacrifice in order to observe Shabbat. Observing Shabbat is usually poor career advice. In turn of the century America, Jewish immigrants often had to choose between gainful employment and their Shabbat observance.  But Shabbat observance is not just about sacrifice. The Bible says Shabbat is a reminder “that you were a slave in the land of Egypt,” and serves as a weekly reenactment of the passage to freedom. This lesson, our tradition tells us, is particularly significant for the oppressed, for whom a day of rest is a soul sustaining taste of redemption.

In his poem “Princess Shabbat” the poet Heinrich Heine depicts the downtrodden and persecuted 19th century Jew, who is treated like a dog during the week, but transformed by Shabbat into a prince. Jewish life could be bitter at times, but Shabbat allowed Jews to see themselves through a different lens, as noble inheritors of an ancient tradition. Ahad Ha’am described this as: “More than Jews have kept Shabbat, Shabbat has kept the Jews.” This might be why, despite economic sacrifices, Jews throughout history looked forward to Shabbat as a refuge from discrimination and adversity.

There is a profound parallel between the ideal of Shabbat and the mission of Shalva. A day of rest is more than a choice of leisure; it is a radical assertion of independence. An institution like Shalva is more than a rehabilitation center; it champions the inherent self-worth of all humanity. Shabbat and Shalva assert that each human being has infinite value.

With their talent and determination, the Shalva Band has inspired Israelis. And now they have declared they will not allow a television competition to override their religious values. They will not be defined by their disabilities, nor will they be defined by what Eurovision wants of them. The Shalva Band will rest on the seventh day.

Rabbi Chaim Steinmetz is the Senior Rabbi of Congregation Kehilath Jeshurun in Manhattan.

The Shalva Band on Kochav Haba – with English Subtitles

The magic of the moment was felt in all languages and touched hearts around the world. Therefore it was important for us to translate the video into English so you get to hear what the band had to say on this incredible occasion.Footage courtesy of makoThe Shalva Band להקת שלוההכוכב הבא