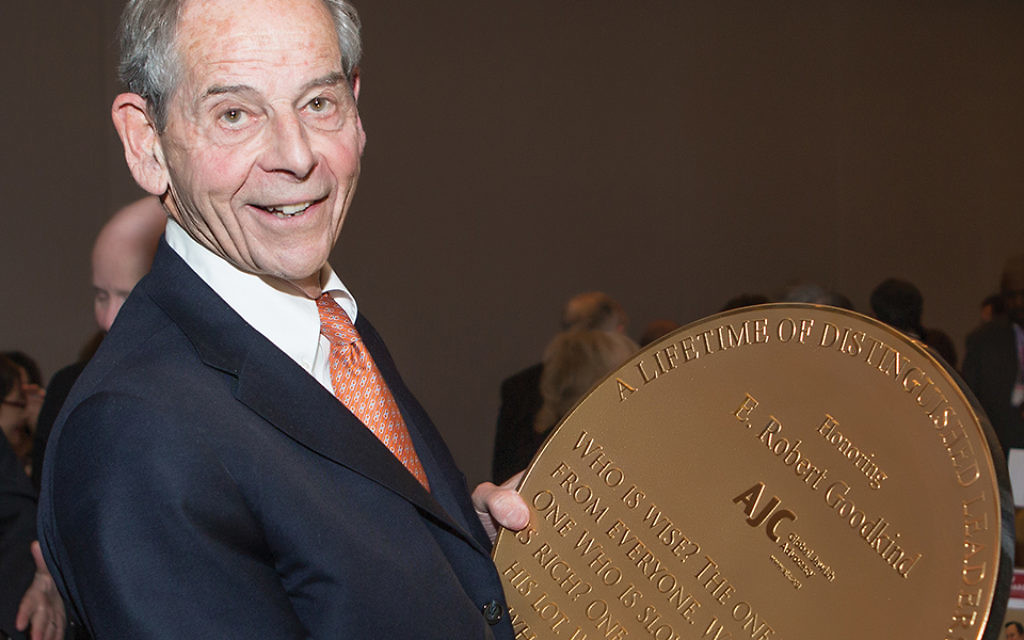 Robert Goodkind, a partner at the law firm of Pryor Cashman LLP, received a Lifetime Achievement Award last month from the American Jewish Committee for his longtime service and leadership to the Westchester/Fairfield chapter and national organization for more than 50 years.

Goodkind, a Rye resident and member of Community Synagogue of Rye, has focused on issues like Jewish religious equality, strengthening ties with African leaders and the Latin American communities. He’s served as the past national president of AJC and is currently on the board of AJC’s Dorothy and Julius Koppelman Institute on American Jewish-Israeli Relations. Goodkind was also chairman of The Jewish Museum, The Jewish Foundation for the Righteous and the American Academy of the Dramatic Arts. Currently he is vice chair of the Israel Policy Forum and a member of the board of the social justice nonprofit Repair the World.

Jewish Week: What was your family/Jewish background?

Goodkind: I grew up in a very secular family. We belonged to a Reform synagogue and I was bar mitzvah.

What initially motivated you to become involved with AJC/Westchester Fairfield?

In college, I awoke to the beauties of Jewish tradition. I had a number of friends and roommates [at Princeton] who were extraordinarily respectful. That forced me to learn more. I took some religion courses at Princeton and learned about the magnificent heritage of my people. I feel lucky to be born part of the 4,000-year Jewish history, and being an American. I felt I really owed the best I could to bring to bear to the Jewish and American civilizations. Through my wife in 1961, I found AJC, which allowed me to give back to the Jewish people and to my heritage, and to be as good an American citizen as I could possibly be. When I found AJC, it gave me a platform that allowed my voice to be heard.

Why did you focus your efforts on Jewish religious equality?

As a lover of Israel, I have great concern about the lack of religious freedom in Israel because of the Chief Rabbinate’s exclusive authority over Jewish marriage, divorce, and by extension, conversion to Judaism. The continued attachment of American Jews to Israel is weakening, which will weaken the special relationship of America to Israel. AJC brought about the Coalition for Religious Equality including all aspects of American Jewry to encourage alternate options to the Chief Rabbinate’s exclusive authority.

How does that relate to your interest in human rights? [Goodkind oversaw the publication of a “Manual on Human Rights and the Prevention of Genocide” as former chair of the Jacob Blaustein Institute for the Advancement of Human Rights].

One of the great aspects of Judaism is the demand for human rights for everybody, even as there’s a need for Jews to protect themselves from various enemies. AJC is unique as an institution in having a universalist and particularistic agenda. Notwithstanding the rise of Islamic fundamentalism and attacks on Israel, AJC keeps in balance the universalist side of being Jewish.

What are some of your efforts relating to Jewish/Israeli relations?

My primary focus presently is the Israel Policy Forum, the mission of which is to bring about a secure, democratic, and Jewish state of Israel by means ultimately of a peace agreement with the Palestinians securing the two-state solution. I’m really quite worried about American Jewish/Israeli relations. I’m concerned that the Israeli government is not interested in moving in the same direction as I am, which is bringing about that secure, democratic and Jewish state. What’s encouraging is that there will be an alternative to Bibi [Netanyahu], and a leader will be found.

What are you most proud of in your work with AJC?

When I was president, there was a major debate about the U.S. using torture. At one particular moment, I had the opportunity to direct AJC to come out against waterboarding and torture very strongly. Over the years, I’ve helped to balance AJC to not be too particularistic. We’re advocates of human rights for everyone. That’s a unique treasure in the organization.