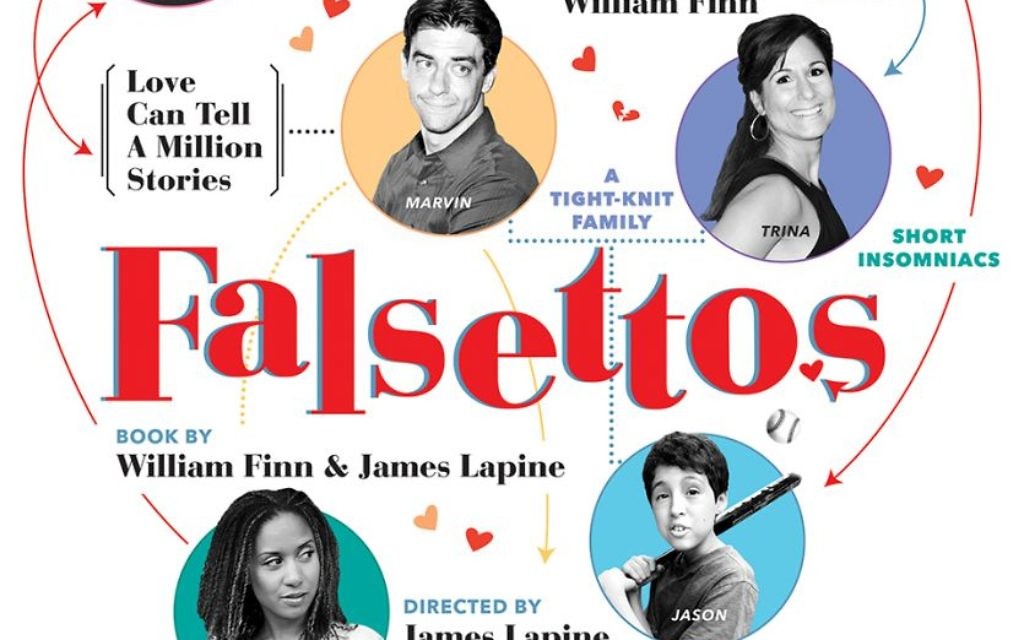 One of the quirkiest, most endearing and most moving Jewish musicals of the post-“Fiddler” period is William Finn and James Lapine’s Tony Award-winning “Falsettos,” about a non-traditional Jewish family that is upended by the sexual revolution and the AIDS epidemic. When it ran on Broadway in 1992, Frank Rich of The New York Times called it a “heaven sent gift” about a “warring modern family divided in sexuality but finally inseparable in love and death.” It returns this season in a new production at the Walter Kerr Theatre with a cast of Broadway veterans that includes Stephanie J. Block, Christian Borle, Andrew Rannells, Anthony Rosenthal and Brandon Uranowitz.

Produced by Lincoln Center Theatre and directed by Lapine, “Falsettos” is a merging of two one-act musicals, “March of the Falsettos” and “Falsettoland,” that premiered Off-Broadway in the 1980s. (The first installment of the original trilogy, “In Trousers,” is not part of the combination musical.) “Falsettos” centers on a Jewish man, Marvin (Borle), who leaves his wife, Trina (Block), for a half-Jewish male lover, Whizzer (Rannells), only to have his psychiatrist, Mendel (Uranowitz), swoop in on Trina. The ruptured family finds a path to unity in the upcoming bar mitzvah of Marvin and Trina’s son, Jason (Rosenthal), only to see Whizzer’s sudden AIDS diagnosis threaten to eclipse that celebration.

In an interview, Finn (“A New Brain,” “The 25th Annual Putnam County Spelling Bee”) told The Jewish Week that the show has not been produced for years because of the difficulty in finding singers who can perform the songs. “I’m a lyricist who writes music,” he said. “It’s hard to find singers who can spin out words quickly with emotion and wit.” And despite the depredations of AIDS, the show is, he noted, “anything but depressing. The characters inhabit a funny world in which humor is appreciated.” Little wonder then that the songs, many of which are parodic, have such titles as “Four Jews in a Room Bitching,” “Everyone Hates His Parents” and “Canceling the Bar Mitzvah.”

Finn, who is gay and Jewish, views the show as about “the creation of a new kind of family,” which at the time that the musical premiered was “very unorthodox.” While the characters are not entirely realistic, he said, “they are flawed people caught in an impossible situation that they’re trying to rise to.” And, according to Finn, the bar mitzvah that takes place in the course of the musical is not just Jason’s but his father’s. “It’s about Marvin’s becoming a man in a new way and loving in a new way.”

Brandon Uranowitz plays Mendel, the psychiatrist who breaks the rules of professional ethics by romancing his patient’s ex-wife. He called “Falsettos” a “play about the struggles that people face within families and relationships.” The actor has been impressed by the “extent to which the younger generation, including fans of Bill who hadn’t seen the musical before, are moved by this show.”

Uranowitz, who grew up in a Jewish family in New Jersey, calls the music “complex but still hummable,” with “magnificently flawed characters who are alive in many ways and even aware of the fact that they’re being watched by an audience.” His own character is “expected to mend the situation but toes the line between the absurd and the real.”

Henry Bial, a theater professor at the University of Kansas and the author of “Acting Jewish: Negotiating Ethnicity on the American Stage and Screen” (University of Michigan, 2005), described the family in “Falsettos” as “inclusively rather than exclusively Jewish.” He explained in an interview with The Jewish Week that while it is clear that the characters are Jewish, they are presented in such a way that everyone in the audience can relate to them.

Bial compared “Falsettos” to Tony Kushner’s epic 1993 “Angels in America,” which also shows a gay Jewish man grappling with his partner’s having AIDS. Just as in “Angels,” Bial said, “the main character’s identity crisis about how to be Jewish itself becomes the thing that’s most Jewish about the show. The dilemma about how to be masculine and how to be one’s authentic self can’t be disentangled from questions of being Jewish.” These quandaries are raised in the context of making his son’s bar mitzvah, which, Bial suggested, is a “sine qua non of Jewish fatherhood.”

Because gay marriage was not legal at the time of the play’s initial production, Bial pointed out, the musical couldn’t build to a wedding. The bar mitzvah thus “provides a climactic event and a touchstone for the characters to return to — one that Jews return to in times of crisis, whether that crisis be diaspora, disease or modern dysfunction.”

How successful will the current production be? Bial noted that Jonathan Larson’s 1996 “Rent,” which also has an AIDS theme, is still hugely popular, with a new production about to open in Wales before touring Great Britain. But he put Finn’s musical more in the category of Stephen Sondheim’s 1970 “Company,” as a “niche musical” that “not everyone likes, but the people who do, really like it a lot.”