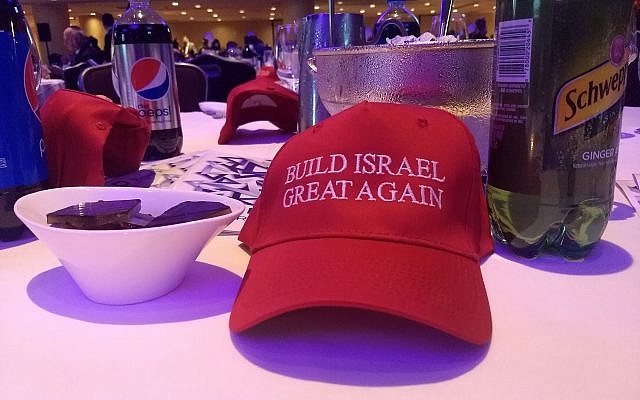 NEW YORK (JTA) — Bright red baseball hats emblazoned with white capital letters freckled the room among the crowd who had gathered for the evening.

To his side, a couple of women cheered, waving Trump campaign signs. Hicks kept his remarks short.

“Just come help us win in 2020. We have the best president ever,” he said, drowned out by loud cheers. “Wherever you have friends, please come get them working. We have to win in 2020. It’s the most important thing in our life.”

Welcome to the gala dinner of the National Council of Young Israel.

The dinner on Sunday night in Midtown Manhattan, an annual fundraising event for an Orthodox synagogue association with more than 100 member congregations, had the trappings of a traditional religious Jewish gathering. There were Hebrew songs, rabbis and their wives were honored, strictly kosher food was served and men peeled off for mincha, the afternoon prayer.

But the theme of the night was support for President Donald Trump, the Republican Party and Israel’s West Bank settlements. Conversely, speakers warned of the dangers of Reps. Ilhan Omar and Rashida Tlaib, two freshman Democrats, both Muslims, who have endorsed the movement to boycott Israel. Omar has also made multiple statements perceived as echoing anti-Semitic stereotypes. 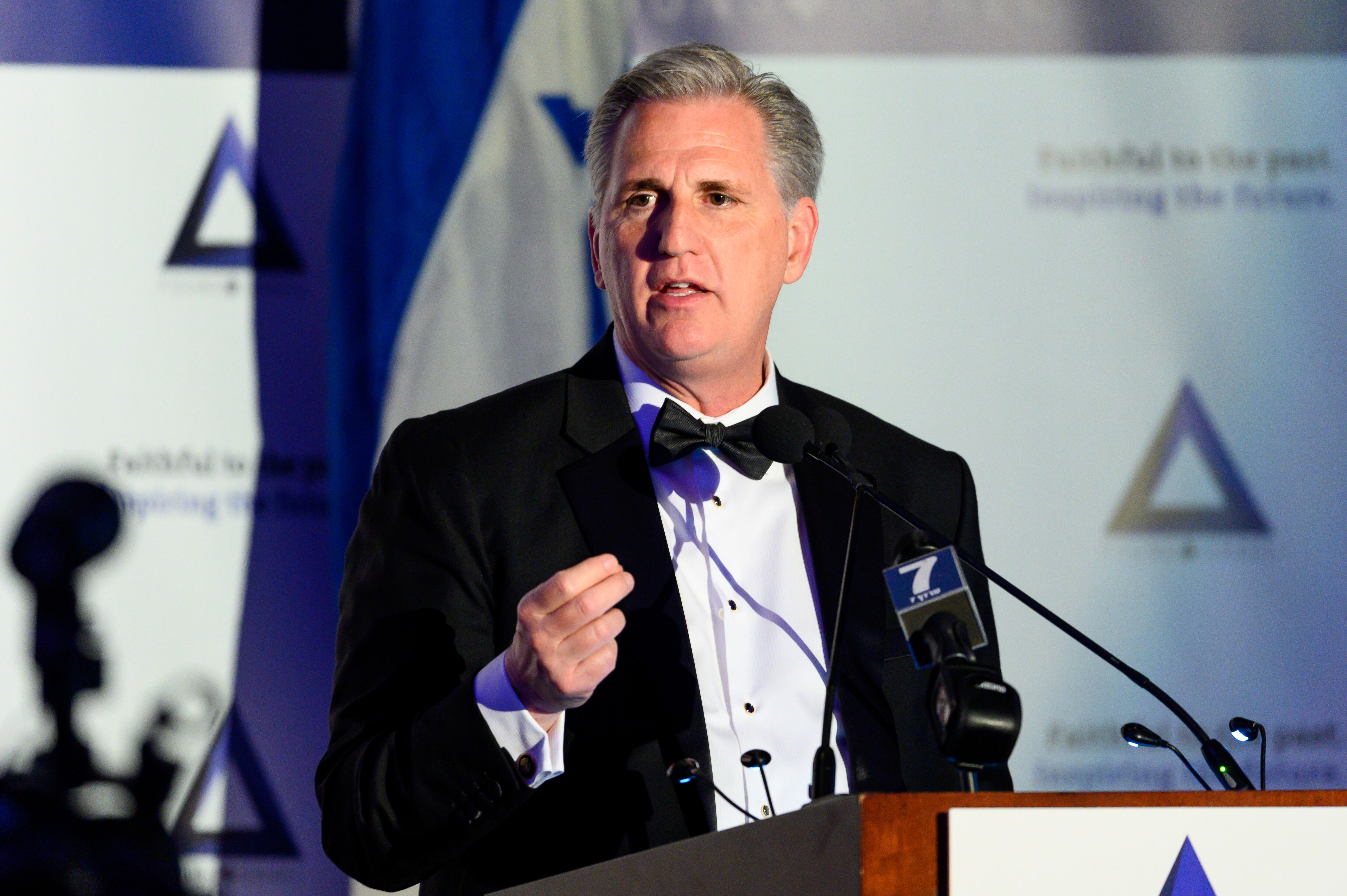 The gala was characteristic of a trend among Orthodox Jews, who voted for Trump in numbers opposite those of America’s non-Orthodox Jewish majority. Their growing affinity for the Republican Party paid off when Trump named an Orthodox supporter of the settlement movement as U.S. ambassador to Israel, moved the U.S. Embassy to Jerusalem from Tel Aviv, pulled the United States out of the Iran nuclear deal and last month said he would recognize Israeli sovereignty over the Golan Heights.

The National Council has a history of supporting right-wing politics in the United States and Israel. And Moskowitz, who runs a consultant and brokerage business, is an outspoken opponent of left-wing Jews on social media. About a week ago, sparring with the left-wing Orthodox group Torah Trumps Hate, he wrote on Facebook that “The Pittsburgh shooting as horrifying as it was, was in my opinion a sad but direct result of their actions.” When you “weaponize a religion against the leader of your country,” he wrote, referring to Torah Trumps Hate’s opposition to the president, “you are putting Jews at risk, are you not aware that you are making people of that religion a target.” 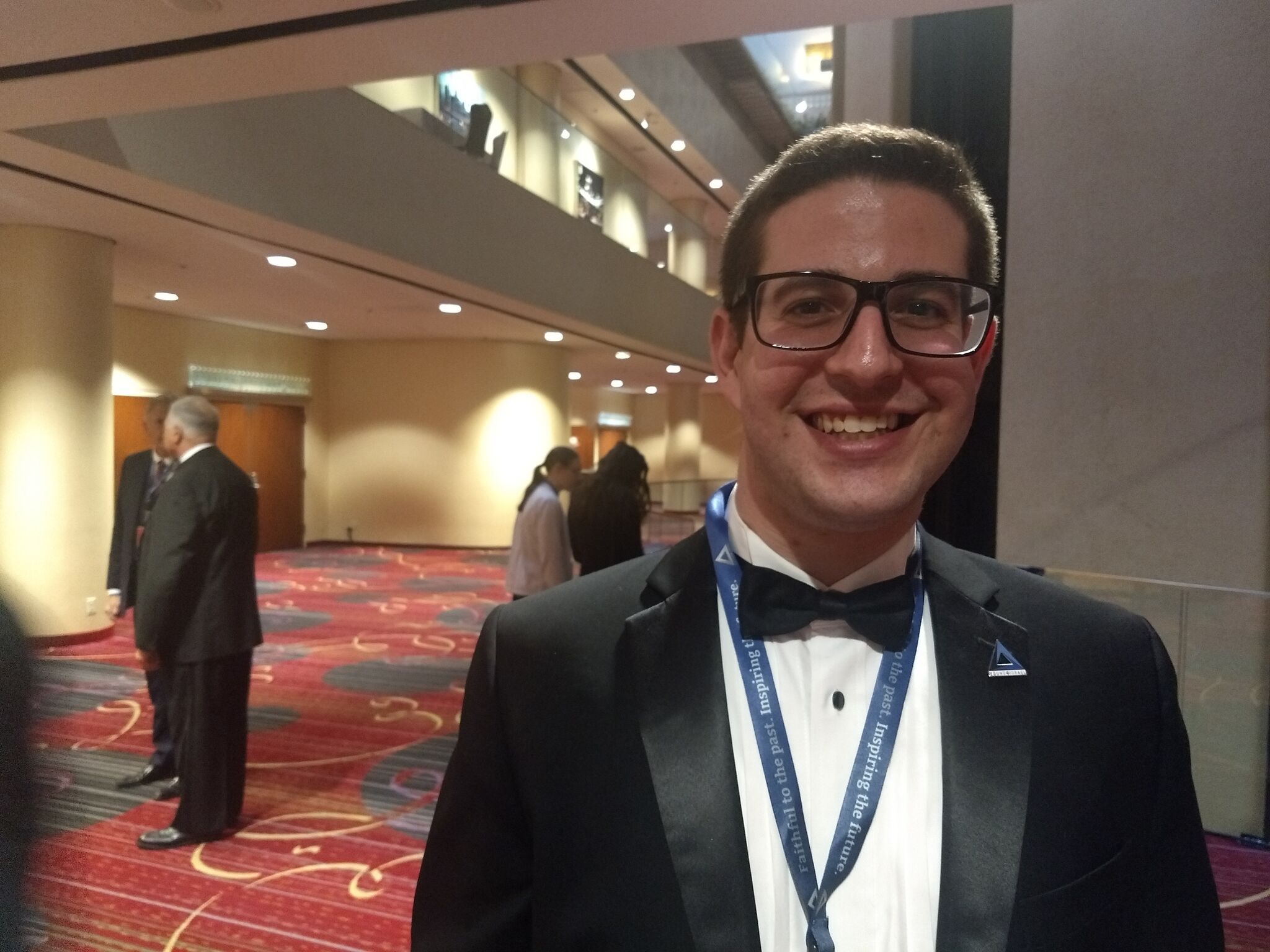 Upon mention of the “tikkun olam” agenda, the crowd booed. “Tikkun olam,” Hebrew for “repairing the world,” is a phrase often used by left-wing Jewish groups in particular to talk about social justice, which conservatives often dismiss as liberal activism.

The lineup of marquee speakers Sunday — including Hicks, McCarthy and Huckabee — was entirely Republican or otherwise right wing. The emcee was Pete Hegseth, the co-host of “Fox & Friends Weekend.”

Rudy Giuliani, the former New York mayor and current Trump lawyer, was in attendance. So was Jack Posobiec, the right-wing pundit and provocateur who promoted the conspiracy that Hillary Clinton was involved in a child sex ring. Kalman Yeger, the New York City councilman who recently tweeted that “Palestine does not exist,” was cheered by the crowd.

“They put fear into us, but they should not,” McCarthy said in his speech, referring to Israel’s enemies. “I expect that from Iran, I expect it from Syria, but I should not expect it from the U.K. and America, or in the halls of Congress.”

The table decorations were MAGA-style hats reading “Build Israel great again.” Attendees gradually scooped them up and wore them. Others wore kippahs or other apparel emblazoned with Trump’s name.

And Trump supporters at the dinner praised the president for more than his Israel policy.

“I got a whole wardrobe of Trump stuff,” said Ayton Eller, wearing a tie and kippah both reading “Trump 2020.” “I got like 10 T-shirts, I got like four sweatshirts, I got five yarmulkes.”

He went on to say: “I’m an accountant, so tax cuts, was like, historical. … The stock market, since he got in, like, went up — I made tons of money with that.”

And: “Everything else, Israel policies, doing away with Obamacare, Obamacare is a mess.”

Not everyone at the dinner came to support Trump. Many on hand were members of Young Israel synagogues, and the group also honored a group of Jewish World War II veterans.

Iris Maidenbaum, 60, is not a member of a local Young Israel congregation, but appreciates the group’s vocal support of Israel.

“We’re not signed up because of any particular political affiliation, but we’re in agreement with many of the policies, at this point probably most of the policies, on Israel and on other things,” she said. “But particularly, our concern is the security and the advancement of the State of Israel.”

For others, the bond between Orthodox Judaism and Trump hit home.

Zachary Silver, 25, a conservative activist who managed the contingent of about 125 young professionals at the dinner, believes that Jews who become more traditionally observant will gravitate toward the Republican Party.

“The Republican Party right now and the conservatives are the most pro-God movement of my life, honestly,” said Silver, who also wore a Trump kippah. “The liberal party, the leftist party, the Democrats, especially here and in Israel, they’re socialist, they’re anti-God, they don’t have true values.”