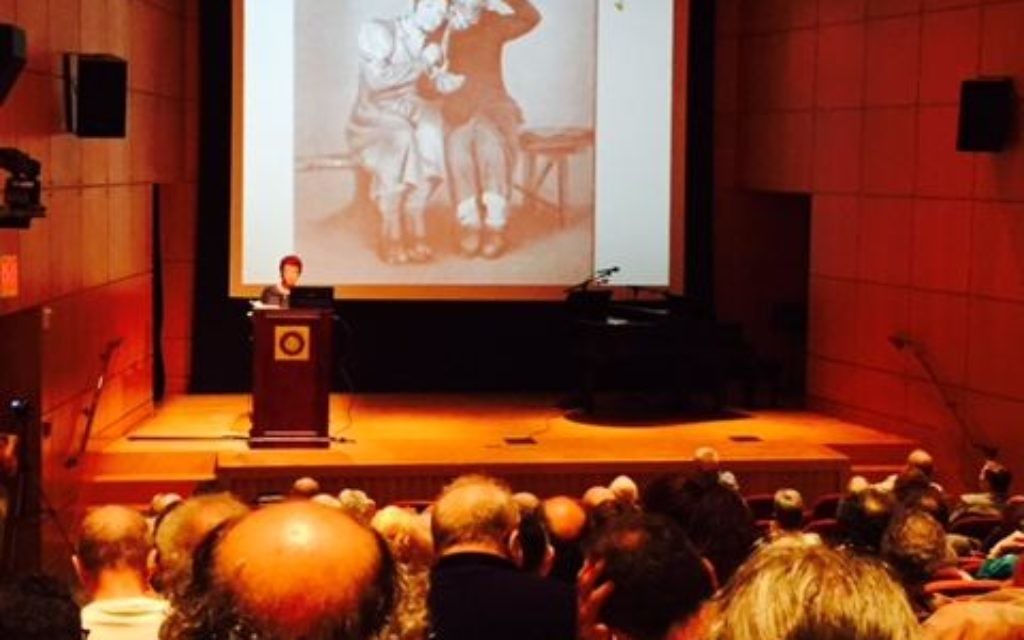 It was doubly fitting that Asa Zuskin Perelman, visiting from her home in Israel, spoke earlier this month at the Center for Jewish History. Her talk, co-sponsored by YIVO, was on her father, the famed Russian-Jewish actor Benjamin Zuskin, and the book she has written about his life and art, “The Travels of Benjamin Zuskin" (Syracuse University Press).

First, her book and the sponsors of the event have similar aims; they do not wish to sentimentalize Yiddish culture, language or life. In Zuskin Perelman’s book and in the exhibits of the CJH and YIVO, there is in their treatment of Ashkenazi culture a seriousness of purpose that strips away the easy old jokes and stereotypes, and instead allows the subject to be seen as vital and influential. Second, August 11 was the anniversary of an event that lives in infamy, when Benjamin Zuskin, along with twelve other Jewish cultural luminaries, were murdered. In this way, Zuskin Perelman highlights and revitalizes an often-overlooked era in Jewish (and world) history, as well as the art of the theater.

Acting as an art, like the study of history, carries with it a pregnant tension. At once somehow both ephemeral and documented (if it weren’t it would be impossible to discuss, or in this case, write about), what the actor has created by the end of the evening is the same thing historical events produce: witnesses to an event that’s vanished.

This paradox between what is concrete and what can only be revived in memory is very much alive in “The Travels of Benjamin Zuskin.” The biography regularly pauses to illustrate the absurd centrality that inanimate objects have on the abstract aspects of a person’s life. For instance, as part of his devotion to the small Jewish theater company to which he contributed his most potent performances, Zuskin took on administrative duties as well. These included “painstakingly” putting down the information of applicants on a specific typewriter; without these specific duties and without this particular tool, Zuskin may well have never met his second wife (and the author’s mother) Eda, in 1925. In this way, a lifeless typewriter served as shadchan, or matchmaker, and led to new life.

As amply demonstrated by Zuskin Perelman’s book, what remains remarkable about the Moscow State Yiddish Theater, and, later, the Jewish Anti-Fascist Committee (JAC), both of which were headed by Zuskin’s acting partner Solomon Mikhoels, and both of which involved Zuskin (though he contributed to the theater first and foremost), is the ardor of their devoted members.Though the JAC was maintained for the largely functional purpose of creating an apparent contrast between Soviet Russia and Nazi Germany in their treatment of Jews, this propagandistic intention somehow did not mar the resolve or the results of the committee members. The members of the theater created genuinely great works of art; throughout, Zuskin Perelman quotes contemporary critics who saw the touring theatrical productions in which Zuskin performed. These reviews are glowing, and universally so, to the degree that they become a kind of chorus, clarifying and substantiating the worthiness of the book’s focus. And the JAC, largely due to the hard work and sincerity of Mikhoels, attracted huge contributions from around the world, donated with the intention of aiding the struggle against the Nazis.

Unfortunately, like one of the inanimate objects that proved so vital to Zuskin’s life, the Jewish Anti-Fascist Committee was seen from a utilitarian perspective by the Soviet government. After World War II had ended, the Soviet government tried and executed its members. With the creation of the Jewish state of Israel, which aligned itself with the United States, and Russia’s long history of anti-Semitism, the Committee was no longer useful. Along with Mikhoels and Zuskin, the JAC included other Jewish cultural luminaries, and for this, the night they were executed has become known as the Night of The Murdered Poets.

The daughter of a murdered man whose journals and personal writings were destroyed, Zuskin Perelman herself embodies the complex nature of heritage, of being inextricably tied to what is no longer present. Her book is a testimony: what is meaningful is not truly lost, and the apparently ephemeral can endure, art and history comprising the body of an inheritance no less for being intangible.

David Hammerschlag is a New York-area writer, editor and cultural omnivore, and a recent graduate of Sarah Lawrence.