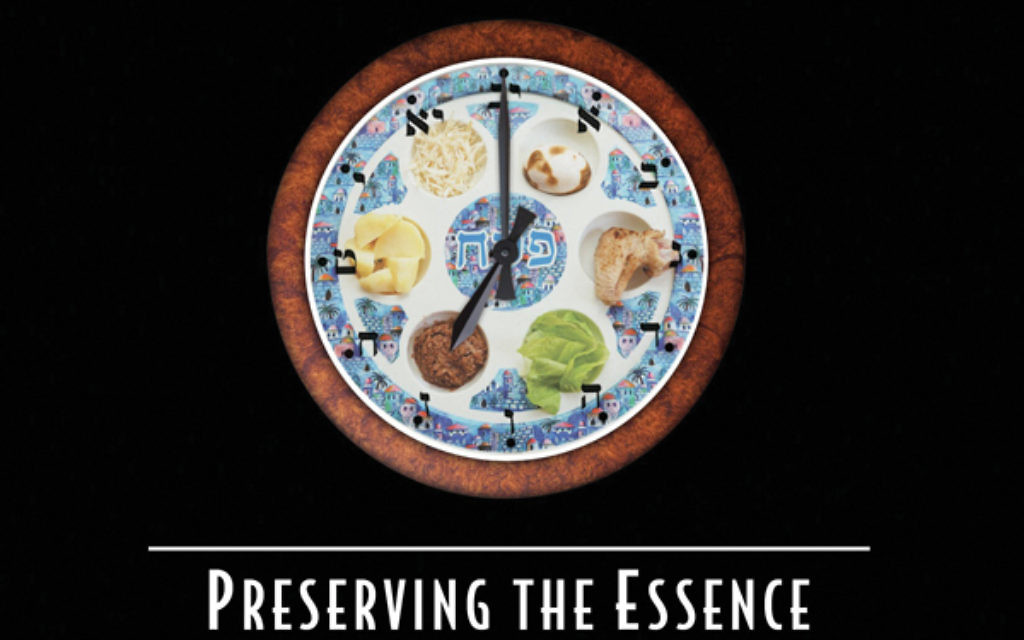 This is the second of a two-part roundup of new Haggadot and Haggadot companions (some appeared too late last year for general distribution).

From the New York-born artist of Israel’s Dry Bones cartoon series comes a Haggadah that combines Kirschen’s familiar cartoon characters (they have provided a tongue-in-cheek commentary on life in Israel for two generations) with the standard text. This is a serious Haggadah, perfect for kids, a printed version of the pdf Haggadah that appeared online last year.

Kirschen, who graduated from Queens College, and made aliyah in 1971, and has penned his cartoons for the Jerusalem Post and for Jewish newspapers in this country through syndication for four decades, created a Haggadah, he writes in a preface, as a “letter to the future.” It’s intended for “black-hat reactionaries and tallit-wearing lesbians”; it was “totally proofread by extremist religious people.”

Kirschen funded the Haggadah through the Kickstarter crowd-funding platform on the Internet — for “future generations of Jews [in a] way that speaks to folks today,” he says.

There is some stage direction (when to fill the cups, when to cover and uncover the matzahs, etc.) but no commentary. The cartoons’ humor is both irreverent and respectful.

“The Dry Bones Haggadah” is available through store.drybones.com.

For members of the People of the eBook generation, the digital Haggadah has come of age.

This year, a Haggadah app from a household name.

The Bronfman Haggadah app is the electronic version of last year’s printed Bronfman Hagadah (Rizzoli) that was produced by Edgar Bronfman, the longtime business leader, Jewish leader and philanthropist who died in December; and by Jan Aronson, his artist wife.

Bronfman wrote the Haggadah; Aronson did the stunning color illustrations.

The Haggadah, really more a Haggadah companion with explanations of seder rituals and readings than a true text-based Haggadah, grew out of Bronfman’s memories of attending long family seders as a child that he never understood. Later, as an adult, he participated in intensive study of Talmud and Jewish philosophy; these studies color his Haggadah.

Produced for iPads and iPhones, the app is interactive, including an expanded amount of material not in the printed version. It features actors’ rendition of the Exodus story, narration, animation, video interviews with the author and artist and seder songs. On the apps, wine glasses become filled, candles flicker and fish swim around.

“This Haggadah,” Aronson said, “is written for a post-denominational, post-gender world.”

The Bronfman Haggadah App can be downloaded via: itunes.apple.com/us/app-the-bronfman-haggadah/id818686545?mt=8.

If you’ve ever thought that the seder you attend runs too long, if you wanted a way to reduce the time but keep in the basics (a subjective task, of course), the Fosters are of like mind.

He, a professor emeritus of theater, and she, who has spent her life in the medical field and created seders “for as many as 50 guests,” have whittled the often-hours-long Pesach night meal from what they consider its inordinate length. “The original Passover celebration,” described in Exodus, “was probably a sixty-minute Seder,” Rabbi Judith HaLevy, spiritual leader of the Malibu Jewish Center and Synagogue, writes in the foreword. “To a traditional rabbi, [an hour-long seder] sounds like heresy!” Rabbi Jack Moline of Agudas Achim Congregation in Alexandria, Va., declares in a preface.

Cass’ grandparents’ seders “were long,” he writes. So he and his wife have made it shorter by leaving in the mandatory blessings and a limited amount of traditional readings, and adding some brief explanations, and leaving out most of the text (including the text for the Blessing after the Meal). Don’t worry — Dayenu is still here!

There are also recipes and discussion topics.

“We welcome Elijah in our final five minutes of the Seder,” the “Sixty-Minute Seder” states. In many homes, the post-meal part of the seder takes more than five minutes. But that’s how a seder can finish in an hour.

Yes, another Haggadah for the crowd that wishes to cover the seder night’s basics in an hour.

The author, whose earlier “30minute-Seder” “blends brevity with tradition,” expands on his theme of keeping the seder from running way past midnight. The abbreviated text, complemented by color photographs and drawing, includes the blessings, and a creative working of the early Jews’ experience in Egypt.

Much of the traditional text is missing, especially in the second half of the seder.

This will be a good fit for both children and adults who wish to cover the essential parts of the seder, with a minimum of verbiage.

Marson, enrichment coordinator at the SAR Academy in Riverdale, compiled students’ questions about Passover ideas and sought other youngsters’ reactions over six years; she compiled the answers; this is the result. “This is fun,” she says the kids said. It shows.

“Why is Passover so important?” Marson asked one group. The answers ranged: “You do unusual and fun customs.” “It’s the beginning of the life of the Jewish people.” “It’s a good time to get together with everybody and talk together with everyone.”

Other questions: “What does it really mean to be free?” “How does God do miracles?” “Why did Pharaoh hate the Jews?”

“No one answer is correct; the responses express different perspectives,” the author writes in her introduction.

This is Pesach poetry.

Solovy, a writing coach and liturgist who splits his time between Chicago and Jerusalem, has written a series of poems, all of which fit on a single page and can be read without adding much to the seder’s length, on such topics as “Breaking Bonds,” “The Season of Freedom” and “Egypt Inside.” The words are neither trite nor pretentious.

Typical, from “Against Human Trafficking,” is a concluding prayer:

“Blessed are You, God of All Being, Who summons us to liberate the oppressed.”

He says his poetic approach to Jewish liturgy was colored by the death of his wife, who suffered a “catastrophic brain injury,” following a fall five years ago.

Following 15 Sammy Spider children’s book (“First Day of School,” “First Passover,” etc.), his First Haggadah is a seder companion for children. It includes a short rendition of the Exodus story that can be read to youngsters at the seder table, some seder rituals and Pesach-themed songs that use familiar melodies like “This Old Man” and “If You’re Happy and You Know It.”

The drawings are age-appropriate; a unique contribution is answers to the Four Questions, answers that children of all ages can use.

You know the popular “Frogs in the bed” song kids sing at the seder? Now it’s the focus of an entire, kids-centered Haggadah companion.

Koffsky, a veteran illustrator who studied at Yeshiva University’s Stern College for Women. has combined engaging drawings and comics, a succinct Exodus story, brief, artistic explanations of a few seder basics, and some simple activities that will keep members of the younger set from getting bored at the seder table or before the seder night.

Rabbi Korngold, who lives in Boulder, Colo., and heads the Adventure Rabbi Program, has documented, in photographs that combine sweeping panoramas and close-ups of people engaged in seder activities, a seder that one of her groups of yom tov trekkers conducted in the desert around Moav.

Not that Moav, the biblical area that’s now part of Jordan.

The rabbi, author of a series of adult theological and children’s stories books, gives a sense of what Passover must have been like in that desert, the Sinai one. If the Israelites wore hoodies, shorts and baseball caps.

Have you ever wondered what the Passover scenario would look like through the eyes of Sherlock Holmes, Alfred Hitchcock or Gilbert & Sullivan? Stop wondering.

Hantman, who has served as a congregational rabbi and synagogue education director, has produced 14 short plays that combine a healthy sense of humor with background of what happened to the Israelites who left Egypt. In short, a Haggadah addition for thespians.

The rabbi worked up these creative interpretations of the Pesach message with the help of her students at the Halutsim Hebrew School in northern Westchester, where she has worked since 1992. Each play is at least ten pages long – too long to be read or performed at most seders, but best suited to be used through excerpts; some of the dialogue is priceless:

Sam (father of the Marx Brothers): The lad [Moses] grew up in the palace of the Pharaoh.

Hantman is partial to such silliness and puns. Be forewarned.

A novel, this is part mystery, part travel guide, part theological tract, all centered around an extended Pesach time jaunt two Orthodox families make south from the Ontario town of Middleton to Destin, Fla., two actual venues. Both families are baalei teshuvah — one with hippie roots, one more traditional.

Along the way the travelers keep bumping into Jews in unlikely places, struggle with the challenges of a large family packed into the limited space of a recreational vehicle and finally make seder inside a RV; the book’s title comes from an encounter with a police officer.

Nathan, a travel writer from Toronto who moved to Israel in 2005, is a talented writer; she offers both a sympathetic look at the experience of secular Jews embracing a religious lifestyle, and the fulfillment of making yom tov in an unfamiliar setting.