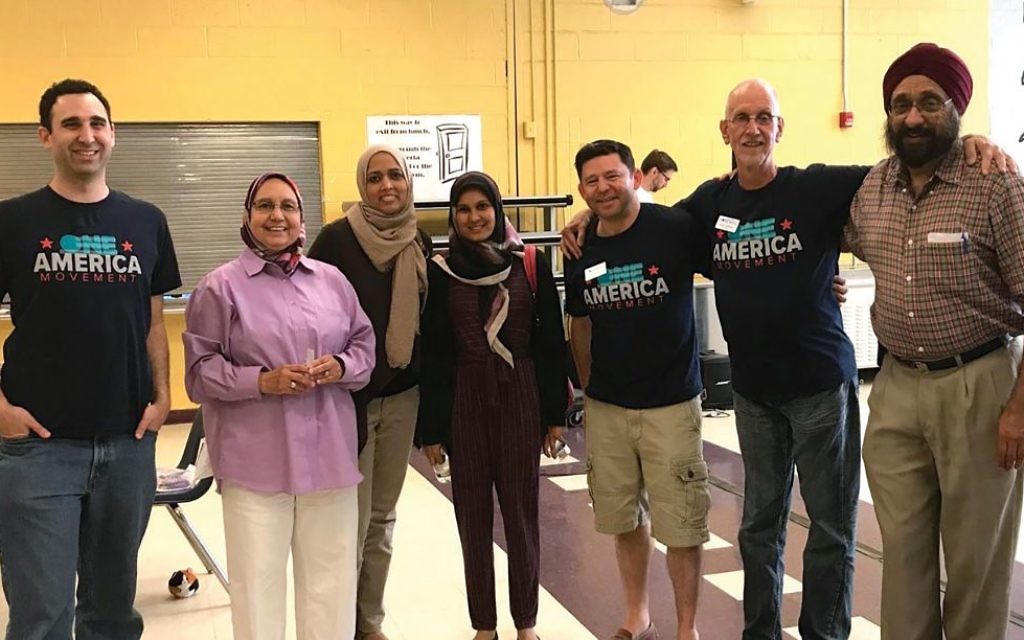 A diverse group of One America Movement volunteers at an event last month in Cherry Hill, N.J. Courtesy of the One American Movement

It was a glimpse, however fleeting, of the first tentative steps toward creating a more “purple America.”

The multifaith event —three synagogues, two churches and two mosques participated — started off like any other. Step one: Do some good. In this case, it was cleaning up trash at a local homeless shelter for about two hours. Step two: Building additional bridges. In this case, the volunteers had dinner, catered by local refugees. It was the third phase of the event that diverged from the norm. Rigorous dialogue — across ethnic, religious and political lines.

Stuart Butler, a longtime member of Adas Israel, the largest Conservative synagogue in Washington, D.C., and one of the congregations that took part in the event, has long been involved with local interfaith volunteer efforts through his work in economic policy at The Heritage Foundation and, more recently, The Brookings Institute.

He said the first two phases of the day weren’t “particularly novel” for him. “What was novel was getting together for dinner and having a structured conversation,” he said. The conversation among the two dozen or so participants hit on several big-ticket questions: for the Jews, How can you defend Israel’s actions in the West Bank?; for the Christians: Why do you think it’s necessary to try to convert people? Then the discussion moved to politics, including the results of the presidential election and the lack of political dialogue in the country. “These are things that need to be talked about,” he said. 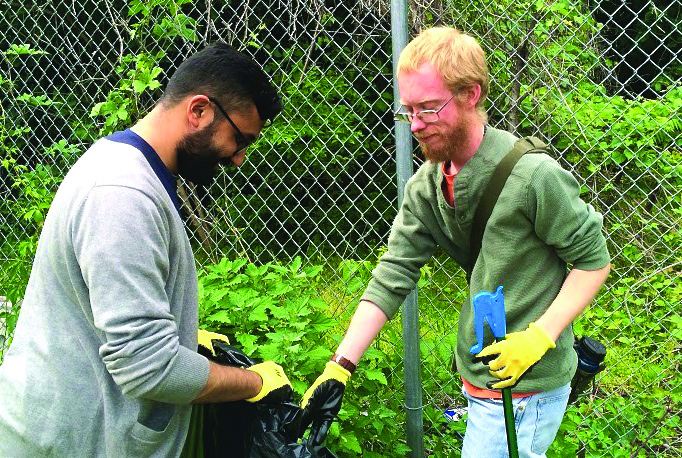 One America volunteers clean up trash at a homeless shelter in Washington, D.C. Courtesy

The event was the inaugural volunteer project of the One America Movement, which was created by a small group of religious leaders in the aftermath of the 2016 presidential election in an effort to help bridge the growing divisions in American society. The group launched in April and held this first volunteer event on May 21. On July 30 it held a larger event in Cherry Hill, N.J., in which more than 100 people from Christian, Muslim, Jewish, Sikh and Hindu communities packed more than 500 backpacks full of school supplies for children living below the poverty line. That group’s post-volunteering, post-eating discussion covered religion, poverty and social injustice.

“The idea is … to bring people together specifically across the different divides that really defined the election — racial, religious, political [and] cultural — and bring them together to do something positive, to participate in community service projects, to have a meal together and to talk together, with the hope that people would then go back into their own communities and then begin to really break down those divisions,” said Mordy Walfish, who helped launch the program as vice president for programs at Repair the World, the New York-based Jewish service nonprofit that is incubating the One America Movement as it gets off the ground. 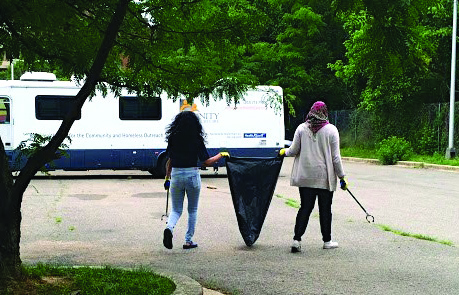 One America volunteers clean up trash at a homeless shelter in Washington, D.C. Courtesy

The One America Movement is not the first group to arrange multifaith volunteer projects — interfaith volunteer networks are abundant across the country. Nor is it the first to set up Jewish, Christian, Muslim dialogue or social groups — the 7-year-old Sisterhood of Salaam Shalom now has 150 chapters, up from roughly two dozen a year ago. The year-old Syria Supper Club, where people pay $50 to attend a dinner, with the money going, after food costs, to the Syrian-refugee cooks who share the meal with the guests, has held over 75 meals involving 30 cooks and more than 1,200 guests.

Volunteering, overall, has mushroomed in the past few months: Since the 2016 election, “site traffic to VolunteerMatch.org skyrocketed to unprecedented highs in their 19-year history,” according to Philanthropy Journal, and Repair the World’s MLK Weekend volunteer roster jumped from 5,000 in 2016 to 8,500 this year.

One America Movement founding director Andrew Hanauer praised the energy and participation generated by the plethora of philanthropic projects.

What One America wants to do, he said, “is leverage that and serve as a platform where we can build a movement behind those projects, so that people aren’t just going to do a project and then leaving it behind, but rather becoming part of a national movement that sees these projects as portraying a vision for what our country could be.”

Hanauer and his staff are currently helping on-the-ground groups organize one-day events like those in D.C. and Cherry Hill that include a volunteer project, dinner and structured dialogue. 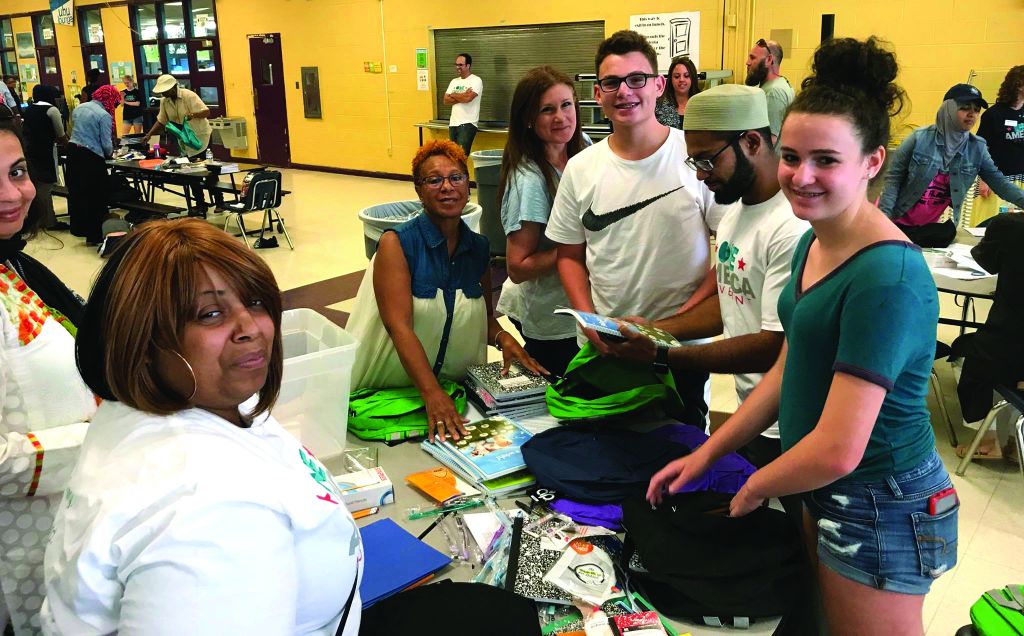 A diverse group of One America Movement volunteers at an event last month in Cherry Hill, N.J. Courtesy of the One American Movement

“When you’re out working on the project it’s all friendly, and the same for the rest of the dinner,” Butler said. Establishing this atmosphere of cohesion and goodwill helped make the discussion section of the event more fruitful. So did its structure, which had participants submitting anonymous questions.

“You were asked to write down a question for someone else anonymously, so you got questions that were much more pointed,” he said.

It was this structure that attracted Repair the World’s Walfish to the One America project, leading to the Jewish service organization taking the lead on the endeavor.

“We see service as being highly tied to dialogue and learning,” said Walfish, who last month left Repair the World to become deputy director at Leading Edge, a nonprofit that helps cultivate the next generation of Jewish communal leaders. “That’s a core element of what it means to serve with meaning, both for the volunteers themselves, to make service part of their identities, and also to be better volunteers in the service projects that they’re doing. 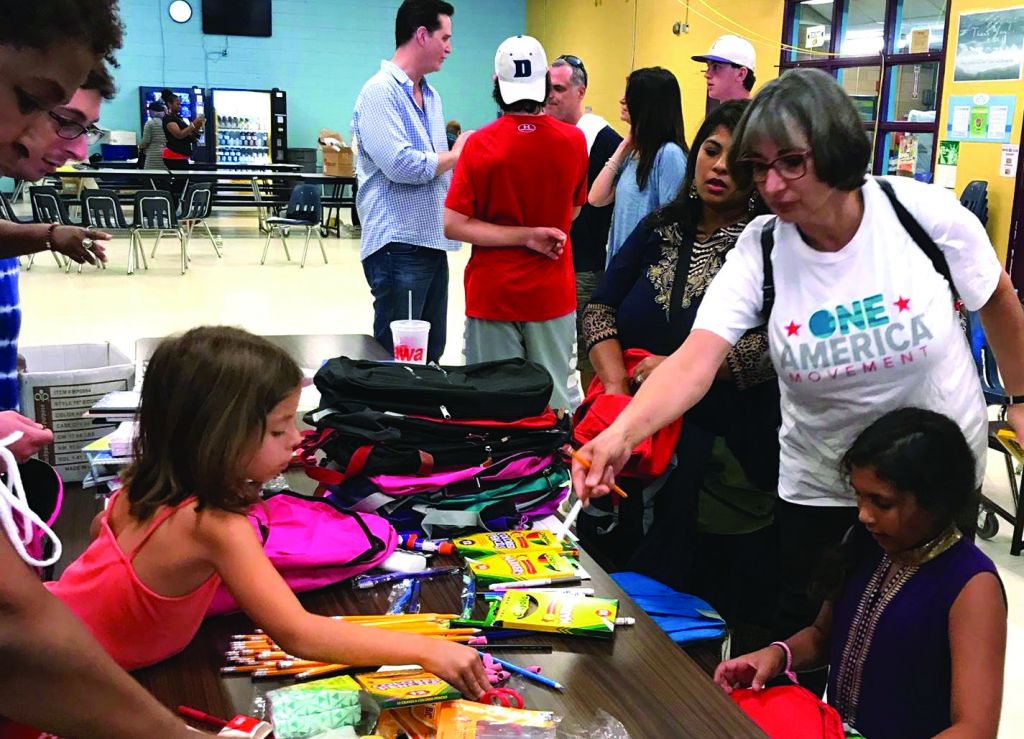 One America volunteers at an event last month in Cherry Hill, N.J. Courtesy of the One American Movement

“It’s a model that I think is going to be of increasing demand as people are really looking locally for ways to have an impact and also looking to connect with people who they don’t normally come across in their day-to-day life,” he added. “People really recognize these divides that exist in this country and how a lot of people exist in bubbles and really only interact with people who hold the same assumptions as them.”

“The temperature of hate has really gone up in the United States.”

Ilhan Cagri, a research fellow at the Muslim Public Affairs Council (MPAC), one of the founding organizations of the One America Movement, said that when it heard about the budding project her organization jumped at the chance to participate.

“The temperature of hate has really gone up in the United States. Whether the people are being targeted are people of color, Hispanics, Muslims or Jews, it really bothers us,” she said. 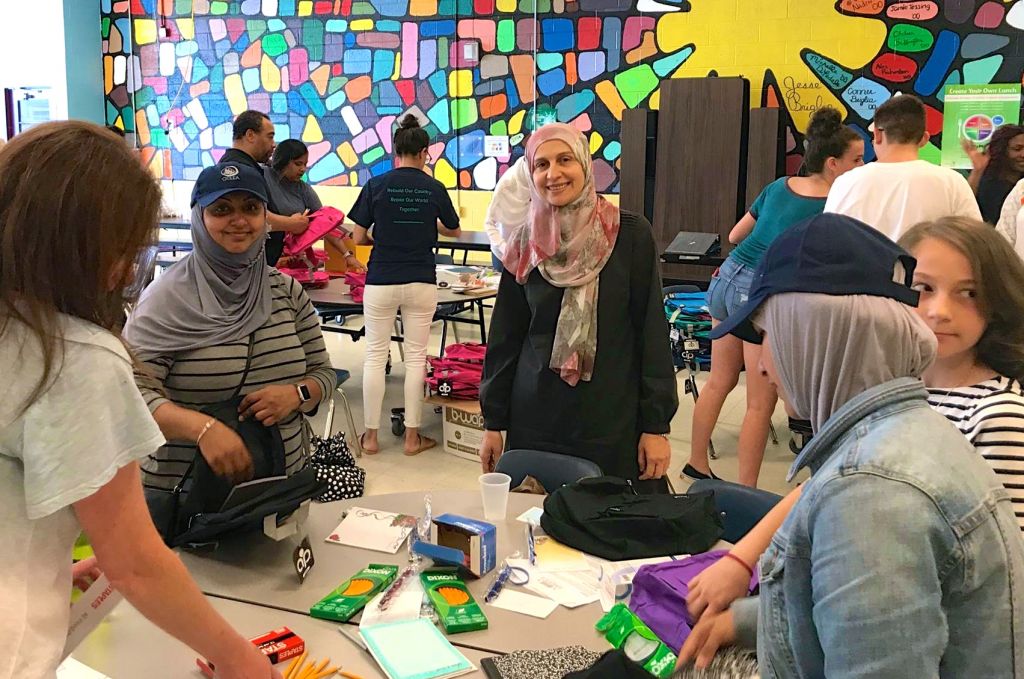 One America Movement volunteers at an event last month in Cherry Hill, N.J. Courtesy of the One American Movement

“When Andrew Hanauer told me [about the plans for One America], obviously we had to be on board.”

Cagri also said the 2016 election had a silver lining. “I want to thank [President] Trump for letting us see how much love there is in the United States. There are a lot of people who are not politically active and feel like they need to say something. … There’s so much goodwill across the country.”

Change doesn’t happen overnight, but it does happen by building personal relationships “drop by drop by drop,” she said.

The One America Movement was primarily launched by faith leaders — seven of its nine board members are from religious organizations including four that are Jewish: Repair the World, Berkeley’s Congregation Netivot Shalom and Los Angeles’ Ikar community, two that are Muslim, one that is Lutheran and one that is multifaith (the other two members are an academic organization and a secular nonprofit). Yet its mission extends well beyond bridging religious divides. 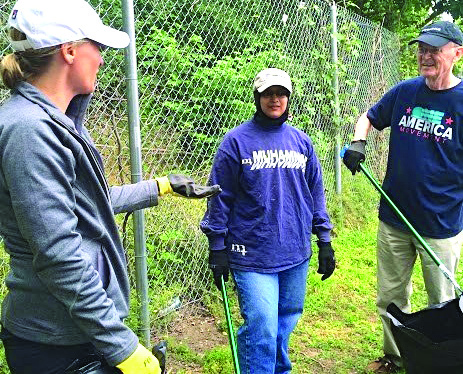 One America Movement volunteers help clean up trash at a homeless shelter. Courtesy of the One American Movement

“We are open to using our movement to address any division in society,” Hanauer said in an email. “Already we are building relationships across religious, racial, cultural and political divides. There is great interest from people to work with us on specific political issues (such as abortion) and divides within a particular religious community (for example, Orthodox and non-Orthodox Jews).”

In addition to increased understanding, the relationships that are built will make it easier for communities to support each other if one of them is attacked, several participants said.

“I think for One America building relationships is the end in and of itself, and we want to be a part of it.”

“I think it will change the way that we react when we do need to be there for each other,” said Rabbi Aaron Alexander of Adas Israel. “Imagine showing up [after a bias incident] when there is already a relationship in place.”

“One of the primary advantages [of the program] is that because of the hours that people are together volunteering, it helps to enrich [cross-cultural] relationships, so that when there are issues in the community, there are relationships to call upon,” she said.

“I think for One America,” Rabbi Alexander said, “building relationships is the end in and of itself, and we want to be a part of it.”