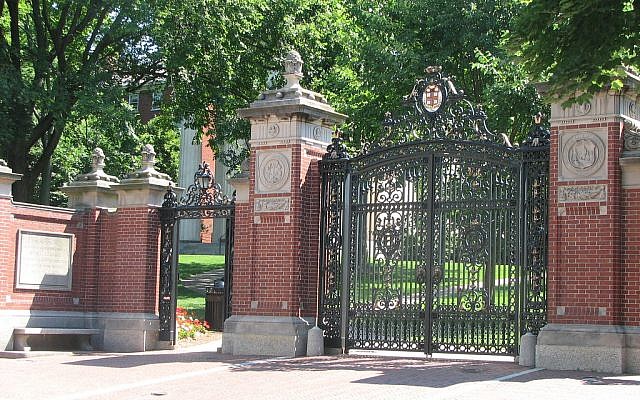 During the two years in which I have been involved in education surrounding the Israel-Palestinian conflict, my understanding of the issue has evolved. However, rather than helping to illuminate any aspect of the conflict, my education has taught me that the only decisive statement I can make about the relationship between Israel and the Palestinian people is that it’s complicated.

For this reason, after hearing that Brown students had voted overwhelmingly in favor of Brown’s Divest Referendum, I was apprehensive when I walked onto Brown’s campus for the first time during ADOCH (Brown’s admitted students overnight). BDS seeks to simplify that which cannot be simplified without drastically mischaracterizing the nature of the conflict itself, and I was worried that if I attended Brown, my campus experience would be dominated by such a one-sided and oversimplified voice. The Welcome Showcase proved that my fears were justified.

Brown Divest claims to not be associated with BDS. And yet, their Facebook page shows the apartheid wall from February 11, with “What is BDS?” painted on the top in large letters. During my visit, I sat in on an environmental studies class, and the teacher spent a few minutes during his lecture explicitly promoting the referendum, which he called a “BDS referendum,” including a slide at the end of his lecture saying as much. Perhaps Brown Divest isn’t associated with BDS, but the events they sponsor and the statements of those directly involved in their campaign do not reflect that.

Brown Divest claims to have engaged in conversation with the Jewish community in the process of creating the referendum. Why, then, is Jewish Voice for Peace, a group that supports BDS, the only Jewish organization on the list of organizations that support the referendum? According to Brown’s student activities website, there are 12 organizations on campus related to either Judaism or Israel – just because Brown Divest has the support of one such organization does not mean that they had discussions with the community as a whole. 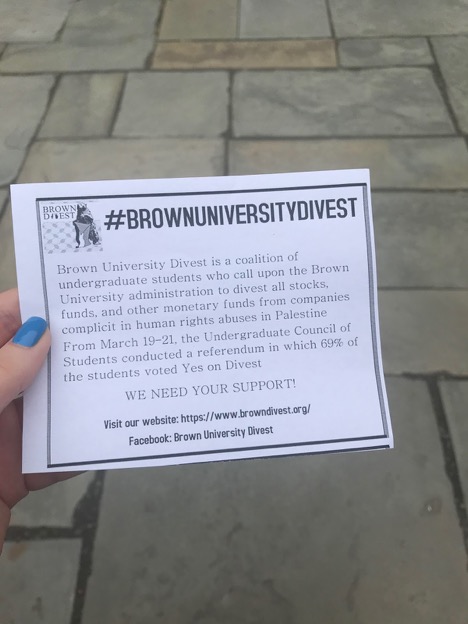 A flyer passed out on campus during accepted students weekend. Photo courtesy of Madison Hahamy

Brown Divest claims to be nonviolent. And yet, they scared us. They shouted, in the dark and without warning, and threw papers on our heads. Afterward, they said in a statement that “Brown tends to lean heavily on its reputation as the ‘progressive Ivy’ during ADOCH to attract progressive students. We felt that it was important to hold the administration to this image.” Personally, I have started a March For Our Lives Chapter, hosted a Green New Deal Town Hall through Sunrise Movement for my community, served on the Illinois Team for the US Youth Climate Strike, hosted an annual feminist Seder at my school, participated in a social justice internship through the lens of Jewish values and founded a Coalition Z chapter at my school. I am progressive, and Brown Divest does not speak for me. By billing themselves as progressive and anyone against them as not progressive, Brown Divest has created an environment in which there can be no productive conversation surrounding this conflict.

Brown Divest lied. They told me that they would be a welcoming community for me, and instead, they tried to pit my progressive and pro-Israel identities against each other. I should not have to choose. Make no mistake, there are plenty of appropriate ways in which to criticize the Israeli government’s policies. I have many criticisms myself, and I fully support the Jewish community’s right to voice their concerns. I used to believe that Brown, a university known for attracting intellectually curious students, would be a place in which these conversations could flourish. Conversations with diverse perspectives, conversations that refrain from flashy words like “apartheid” and “colonist” without actually unpacking the seriousness of such an accusation, conversations that could find common ground, conversations that would work towards a peaceful solution.

There have been many articles on this topic thus far, and I recognize that it may be hard to take my perspective seriously given my status as a relative outsider. However, it is this very status that makes my opinion so necessary to the discussion. I stayed at Brown University for two days during a visit designed specifically to give me “a rich taste of life at Brown,” as described by a 2017 Brown University article. This is what ADOCH has taught me. Life at Brown is not intellectual but filled with litmus tests. Life at Brown is not seeking out diverse viewpoints but finding those with similar ideals and fiercely promoting them. Life at Brown is simplifying complexities and using soundbites, favoring self-righteous rage over open-minded discussion. Maybe this was just ADOCH, and if I attended Brown, this wouldn’t be the experience I would have. I do not know if I am willing to find out.