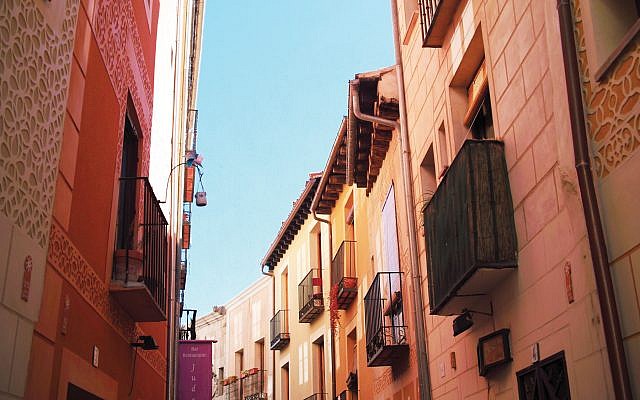 An hour northwest of Madrid, on the dusty road to Valladolid, lies one of the most quintessentially Spanish cities: Segovia.

Regal and timeless, Segovia boasts historical grandeur well out of proportion to its population of roughly 55,000. It has all the elements you associate with Old World Iberia: forbidding medieval walls; a picture-perfect castle, crowned by turrets; an imposing Roman aqueduct; and the narrow, winding lanes of a pre-expulsion Jewish quarter, where traces of that heritage remain.

What it doesn’t have, still, are streets clogged with Airbnb tourists rolling suitcases past tchotchke shops and generic, could-be-anywhere pizzerias. Most visitors to Spain bypass Segovia for the greatest hits of Prado and playa; young Segovianos, meanwhile, head to Madrid for work, leaving an 18th-century cathedral to dominate a skyline devoid of office towers. The result is that Segovia feels like the kind of place where Don Quixote might still ride up with Sancho Panza.

Start your own journey at the Alcázar de Segovia, a 12th-century royal palace between two rivers along the city’s western flank. From atop its lofty perch, the Alcázar offers views over the medieval city center, across miles of sunbaked plains to the purplish mountains beyond. 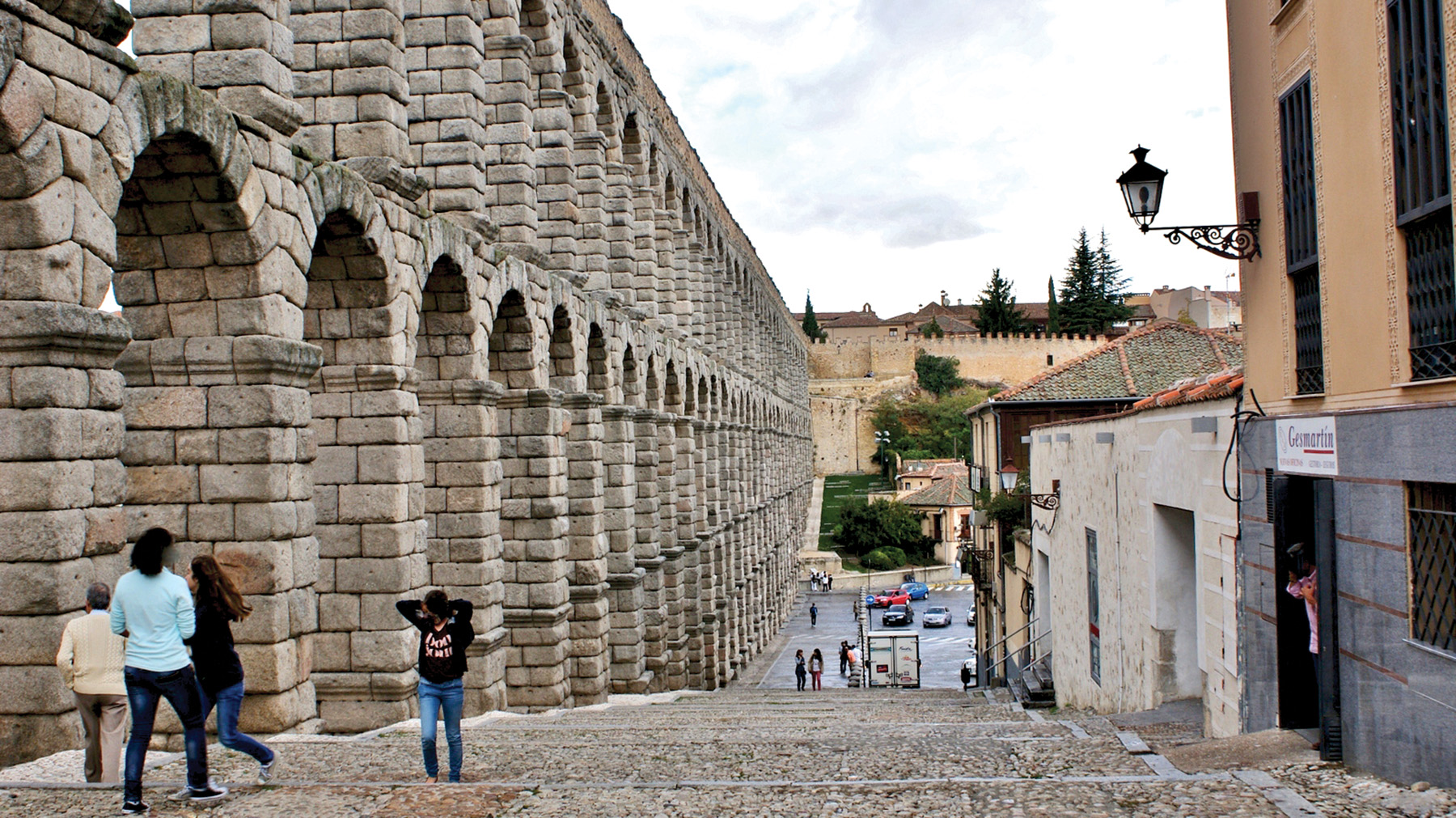 Along the Roman Aqueduct. Photos by Wikimedia Commons

As befits a longtime residence of kings, the Alcázar is an archetypal royal palace (although the original 12th-century structure was rebuilt after an 1862 fire). It has notched spires, grand terraces, and shiny gilded artifacts to ogle in what is now a museum inside. The palace’s formal green gardens evince Segovia’s strangely lush, oasis-like microclimate amid the arid Castilian plain.

Downtown, visitors still enter through one of a half-dozen “gates” in the fortified city wall, as they have since medieval times. Then, as now, the city’s southern landscape was defined by a massive Roman aqueduct that many consider among the most significant legacies of the Roman Empire; along with the city center, the aqueduct is a UNESCO World Heritage site.

Modern-day Segovians still get water from this Roman-era vestige — a marvel not only for its functional longevity, but also for its construction: 25,000 granite stones wedged into place without mortar.

The Gothic Segovia cathedral rises over a tangle of cool, shady alleys too narrow for traffic. Centuries before Catholic imperialism, however, multicultural Segovia was an important stop on Iberia’s medieval trade route, where a Jewish community flourished alongside Moorish and Christian merchants. 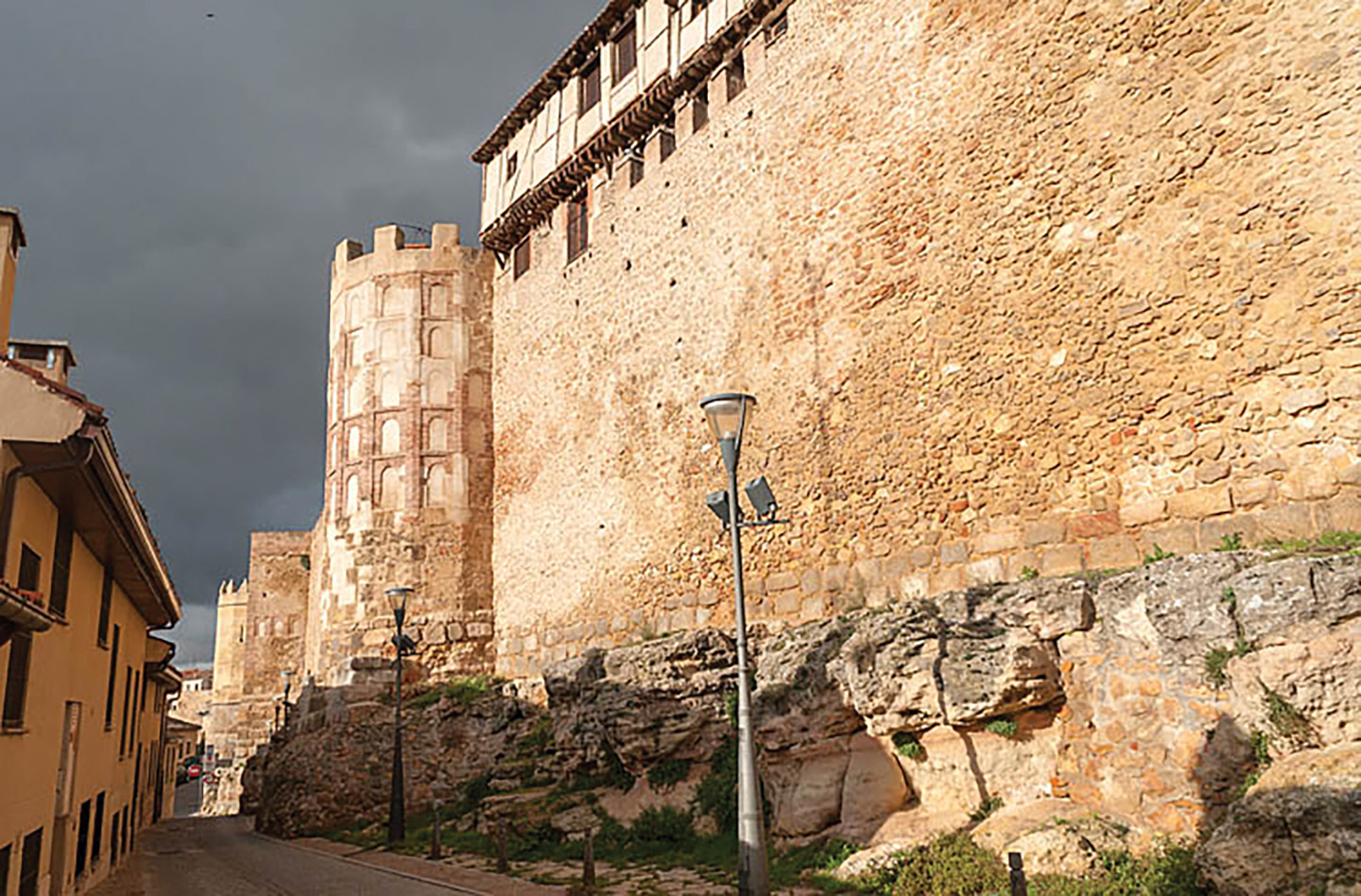 The medieval walls of the Jewish quarter.
Photos by Wikimedia Commons

The legacy of that era has earned Segovia a spot on Spain’s Red de Juderías (Sephardic Jewish heritage itinerary). Visitors to the onetime judería, the historic Sephardic neighborhood, should stop by the Jewish Quarter Education Center at 12 Judería Vieja (literally, Old Jewish Street). Like many of the wood-frame stone houses in this district, the site has Jewish roots. It was the home of Andrés Laguna, a prominent 16th-century doctor, translator and scholar from a converso (converted Jewish) family.

No fewer than five synagogues once served Segovia’s Sephardim; today, as throughout Spain, all that remains from that Jewish era are a collection of addresses.

Most tangible — besides the well-kept Pinarillo Jewish Cemetery, just outside town — is the Corpus Cristi convent, once the Sinagoga Mayor. Its medieval building was restored twice following an 1899 fire, with interior pillars and pineapple-motif plasterwork restored according to original drawings.

Nearby is the convent of the Jesuitinas on Calle Escuderos (Street of the Squires), a site once known as the Sinagoga de Ibáñez; remnants of an ancient mikveh were unearthed during renovations. The Jewish quarter was officially dismantled in 1481, a decade before the so-called Catholic Monarchs — Ferdinand and Isabella — expelled the Jews along with the last Moorish rulers, unifying Iberia’s territories into modern-day Spain.

In the years before the Spanish Civil War, the great poet Antonio Machado took a teaching job in Segovia, living in a house that is now a museum on Calle Desamparados (Street of the Forsaken). Generations of literature students recall the lines of his most famous poem: “Caminante … al andar se hace el camino.”

Traveler, as you walk, you make your own path. Machado’s observation sums up the itinerancy of Iberian Jews — whose memory lingers in the places, like Segovia, where they paused.