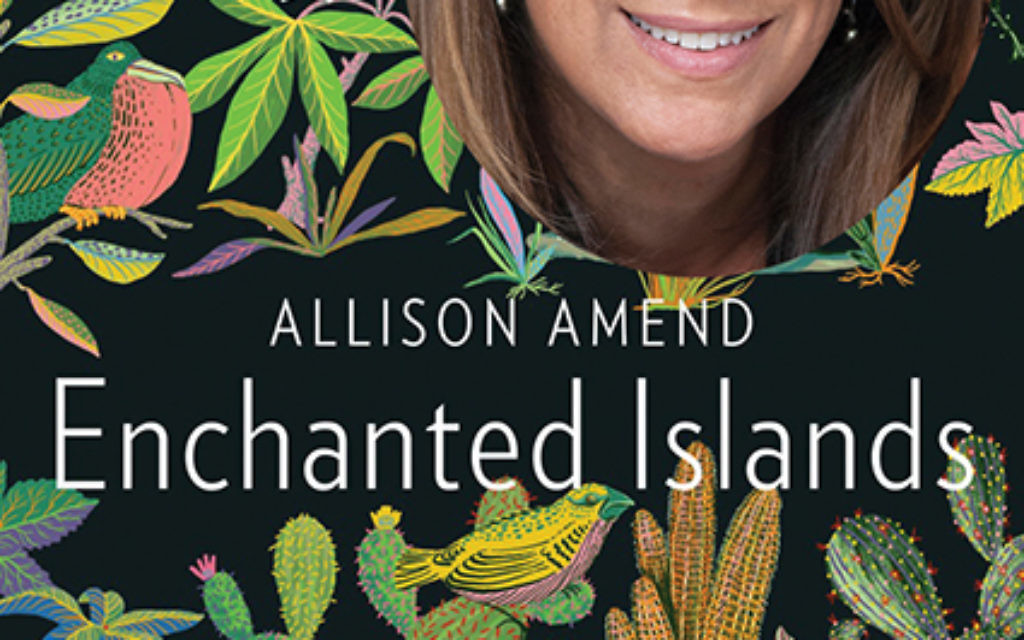 Anyone planning an island excursion this summer will find good company in Allison Amend’s entertaining new novel, “Enchanted Islands” (Doubleday). Equal parts spy adventure, coming-of-age saga and meditation on love and friendship, the tale takes its inspiration from the lives of Frances and Ainslie Conway, a sophisticated American couple who for several years just before and after World War II traded in their comfortable life in San Francisco for a less than romantic hard-scrabble existence on a barely inhabited and mostly barren island in the Galapagos, off the coast of Ecuador.

But why, you might wonder, would a middle-class, middle-aged couple decide on such a sojourn? Good question. Although the real-life Frances Conway wrote two memoirs focused on the day-to-day details of survivalist living on the island, she apparently never revealed the couple’s motivations for embarking on their adventure or delved into the details of their marriage.

In contrast, Amend’s fictional Frances is the opposite of reticent.

Amend imagines this Frances composing yet another memoir, towards the end of her life, and in this “true confession,” one surprise quickly follows another in a backstory that is both invented and inventive.

Before she became Frances Conway, this character tells us, she was Fanny Frankowski, born in 1882 to impoverished Jewish Eastern European immigrant parents who had found their way to Duluth, Minn. By second grade she has met and befriended the vivacious, impulsive Rosalie Mendler, whose Jewish immigrant parents outwardly appear to be considerably better off than Fanny’s. Or are they? Only slowly, as they both grow into adolescence, does Fanny begin to uncover the unsavory secrets driving Rosalie’s unpredictable behavior and moody outbursts.

Readers will doubtless catch on sooner than the still-innocent Fanny as to what Rosalie’s parents are up to, but their seamy denials of culpability are unsettling nonetheless. Their collusion in the abuse of their daughter also sets in motion the series of events that will compel Fanny and Rosalie to reinvent themselves again and again, assimilating to whatever circumstance requires adaptation.

More in the Summer Reading Series
The Undertow At Bagel Beach
Summer light and loss in ‘As Close To Us As Breathing,’ set on the Connecticut shore.

Although Amend never explicitly spells out Darwin’s theory of evolution in relation to her characters, it will not escape readers that this novel, set in part among the islands where the great naturalist began formulating his ideas, centers around characters who must acclimate and adapt to each new environment their lives take them to. And the different iterations of Fanny and Rosalie have much to do with the ways in which they turn to their Jewish identities as a salvation — or abandon their Jewish selves as superfluous.

While still in their teens, the girls run away to Chicago. Desperate to find a place to stay, they have the genius idea to seek out Jewish synagogues whose members may be willing to help them. In a comedy-inflected women’s auxiliary board scene circa 1900, Rosalie succeeds in playing up their plight to find temporary lodging with a family. They’re given room and board in exchange for Rosalie taking care of one synagogue matron’s ailing, aged mother. Meanwhile, Fanny finds a job in an office where everyone appears equally comfortable conversing in English or Yiddish — and discovers romance with a nice Jewish boy who teaches her about Herzl and Zionism. But a honeymoon voyage to Jerusalem is not to be. Rosalie’s cruel betrayal of her supposed best friend propels Fanny to leave Chicago behind, her last name now shortened to Frank, and any connection to her Jewish past erased.

In time, Fanny finds her way to San Francisco, where her isolated life as a spinster without family or friends, and her job as a secretary in the office of Naval Intelligence, will make her a prime candidate to participate in an undercover espionage operation. First potential drawback: it will require her to marry an absolute stranger, Ainslie Conway, a charming naval intelligence officer and confirmed bachelor 10 years her junior. The second: it will mean spending at least one year living in the most primitive of conditions while nonchalantly keeping an eye out for suspicious activity among the handful of Germans already settled in the so-called Enchanted Islands of the Galapagos.

More In The Summer Reading Series:
Summer Shorts
A roundup of new titles, from baseball to Central Park to the Garment Center

And a third: In a Dickens-like coincidence, Fanny has run into Rosalie, who has also found her way to San Francisco, where she now lives a life of luxury, having married and become a synagogue matron above reproach. Each one’s personal secrets of lives left behind contain the power to expose the other, they realize. In keeping with the book’s theme of adaptation and evolution, however, rather than risk mutual destruction, they renew their friendship.

In a similar vein, when the Conways finally do arrive on the island, they are at first clueless about the “real” identities of the handful of other islanders, oddballs all of them, perhaps the only verifiable fact about them. Mysterious comings and goings and unexplained disappearances ensue. But the real pleasure of these chapters lies in watching Frances adapt to the necessities and rhythms of island life, learning how to light cooking fires without a match, cultivate unusual island plants and prepare edible meals out of them, hunt and fish varieties of animals she has not seen before, and reconcile herself to a marriage of convenience that is rich in companionship but little else.

Amend deftly weaves together the different strands of her complex plot and makes the reader care about her characters’ plights. She adroitly explores the ambivalent, and sometimes combustible mix of emotions and impulses that make up Fanny and Rosalie’s complex friendship. And she portrays both the devotion and the differences between Frances and Ainslie with understanding and empathy.

Nonetheless, I did not quite buy the enduring loyalty between Frances and Rosalie, and Ainslie’s secrets telegraphed themselves too obviously. But let the story carry you along, and you’ll discover a satisfying island sojourn. ✹

Diane Cole is the author of the memoir “After Great Pain: A New Life Emerges” and writes for many national publications, including The Wall Street Journal and NPR online.