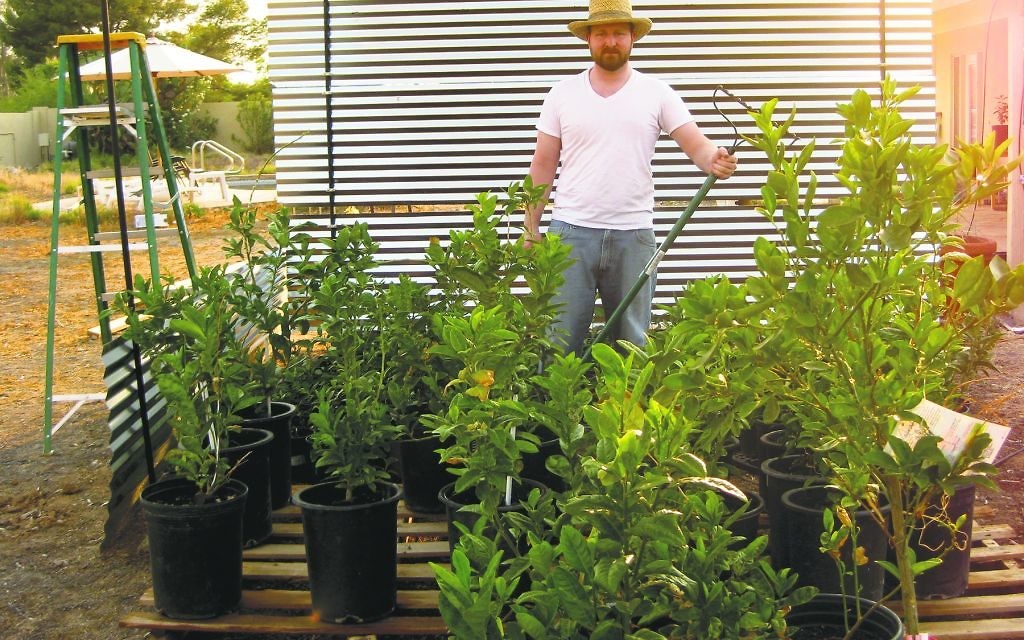 Matt Bycer is like any other 33-year-old attorney who wakes up at the crack of dawn to exercise.

Except that rather than sweating to a P90X regimen, Bycer, in a T-shirt, shorts and cowboy hat, lugs 170 buckets of water across his backyard in Scottsdale, Ariz., to water his etrog farm.

The Phoenix native has been nurturing his citron project since he first started collecting etrogs in 2007. With a 60 percent survival rate for each etrog tree he plants, Bycer is optimistic that he’ll be up for production in five years and able to sell the valuable fruit to Jews across America.

The etrog (also pronounced esrog) is one of four plant species that Jews are enjoined to pick up and shake daily during the weeklong holiday of Sukkot, which this year begins on the eve of Sept. 30.

“I’m a patent lawyer by day and farmer by dawn,” he said. “It’s a lot of work to run this esrog farm, and a lot of people laugh at me and think its kooky, but I have a huge backyard and I like working outside. I’m really dedicated to this.”

Bycer started his etrog farm after discovering there was a need for U.S.-grown etrogs — particularly every seventh year during the “shmitah” sabbatical, when the Torah’s command that the land of Israel lie fallow handicaps Israeli etrog farmers. The last time such a shmitah year occurred, in 2007, many observant Jews were forced to rely on a rabbinic loophole to procure Israeli etrogs because of an insufficient supply from the Diaspora.

Etrogs retail from a few dollars to several hundred dollars, with most in the $20 to $50 range. Often they are sold as part of a set along with the three other Sukkot species: lulavs (palm fronds), hadassim (myrtle branches) and aravot (willow branches).

The only large-scale etrog supplier in the United States currently is a Presbyterian farmer from northeast California named John Kirkpatrick, who was profiled in a Tablet magazine article last year.

Bycer says he is aware that many who have tried have failed to grow etrogs, including friends of his in Florida and Texas who found the climate was too humid. The fruits need a dry and sunny climate, which is why most of them are grown in Israel. Southern Europe, especially Italy, also is a major source for etrogs.

With Arizona practically as dry as Israel’s Negev Desert, the Copper State appears to be an optimal place to grow American etrogs.

What started as a hobby has become Bycer’s part-time job. He estimates that he puts in at least 15 hours a week and nearly $10,000 every year. His methods for etrog care come from reading material from the horticulture departments of the University of Arizona and University of Florida.

His first attempt at etrog farming ended in failure, when he rented a 2,700-foot house and kept the etrogs indoors, surrounding them with florescent lights and foil-covered walls.

“The whole thing was a disaster because I had no idea what I was doing. There were bugs everywhere, the plants were too wet and everything just died,” he said, laughing. “But part of being a citrus farmer is catching on as you go, so I learned I had to let the plants dry out in between watering them.”

Bycer started again and now has nearly 200 healthy trees. With each tree capable of producing up to 40 fruits, he hopes his sales soon will number in the thousands.

After marrying in 2010, he moved the plants outside to a makeshift greenhouse with walls covered in foil. Bycer inspects them on a daily basis.

To keep his crop organic, Bycer uses chemical-free pesticide alternatives such as fish-oil soap or nicotine-based insecticides. He plants the etrog seeds in small pots right after Sukkot and incubates them inside, then moves the plants outside once they start sprouting six months later.

“The community here has been so supportive,” he said. “Everyone donates their etrog to me after Sukkot so I can plant their seeds.”

Etrogs grow best in 95-degree temperature; Arizona highs can soar well into the triple digits. So Bycer shields his etrogs with a shade structure and special cloth, and he constantly sprays them with specialized water. When winter sets in and the temperatures drop to near freezing, Bycer wraps the plants in Christmas lights to keep them warm.

“I really have to spend a lot of time being on top of them,” he said. “All it takes is one day of bad weather, even if it’s a drop too cold or the sun hits a tree too long, and the whole plant can die. And all it takes is one spider mite to eat the plant and it’s done.”

Because Jews cannot agree on which etrog variety is optimal, Bycer has planted an array of specimens: Moroccan etrog, which has an hourglass-like strip around the middle; Chazon Ish or Balady etrogs, which are covered in bumps and are very popular; Yanover or Diamente etrogs, which are greener and smoother; and Yemenite etrogs, which are significantly larger than average.

Once the trees begin to produce fruit, Bycer hopes to supply underserved communities throughout the United States that don’t have easy access to etrogs. Bycer says his wife, Elly, encourages his etrog venture, although she’d prefer he’d spend less time outdoors and more time helping with their 6-month-old daughter, Nava.

“Never mind that I smell like fish oil from inspecting the leaves so much,” Bycer said, “my wife tells me she knows it makes me happy because I’m always smiling when I’m out there.”