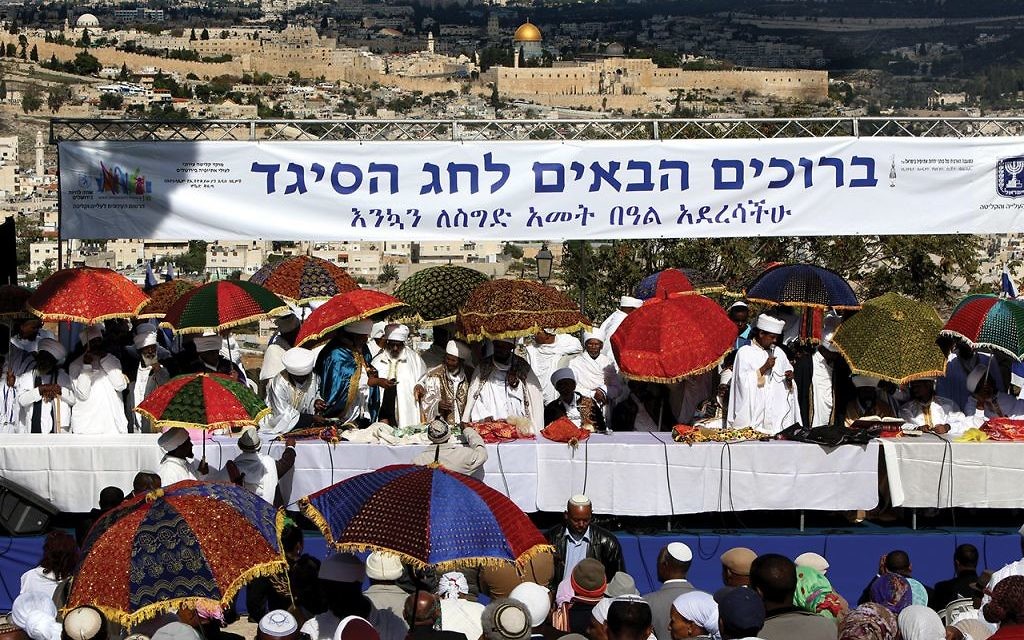 In their homeland of Ethiopia, they marked their unique Jewish holiday, Sigd, on a nearby mountain.

In their spiritual homeland, Israel, they celebrate Sigd on the mountainside in Jerusalem.

Last week, the Beta Israel, as the Jews of Ethiopia call themselves, participated in the holiday that takes place every year 50 days after Yom Kippur.

Conducted by kessim, the Ethiopian Jews’ spiritual leaders, the members of the transplanted community sang and prayed, listened to sermons and readings from Torah scrolls, fasted and then feasted at an overlook in the capital’s Armon Hanatziv neighborhood. Then they marched to the Western Wall.

One of the guests, President Reuven Rivlin, told the hundreds in attendance that Israel will make greater efforts to integrate the country’s Ethiopian Jews, many of whose standard of living does not approach that of other citizens.

“The Israeli community tried to do important and wonderful things, but didn’t do enough,” the Times of Israel quoted Rivlin as saying. “I believe it is in our power to correct this.”

Prime Minister Benjamin Netanyahu earlier announced that Israel will allow the immigration of an additional 9,000 Falash Mura, descendants of Jews who converted to Ethiopia’s dominant Christian religion a century ago.

Their Sigd (it means prostration in the Ge’ez language) holiday, which became part of Israel’s official calendar in 2008, is increasingly popular among non-Ethiopian Israelis. Sigd, first recorded in the 15th century, recalls how the prophets Ezra and Nehemiah, who heralded the Jews’ return from exile in Babylonia, renewed the covenant between God and the Israelites.