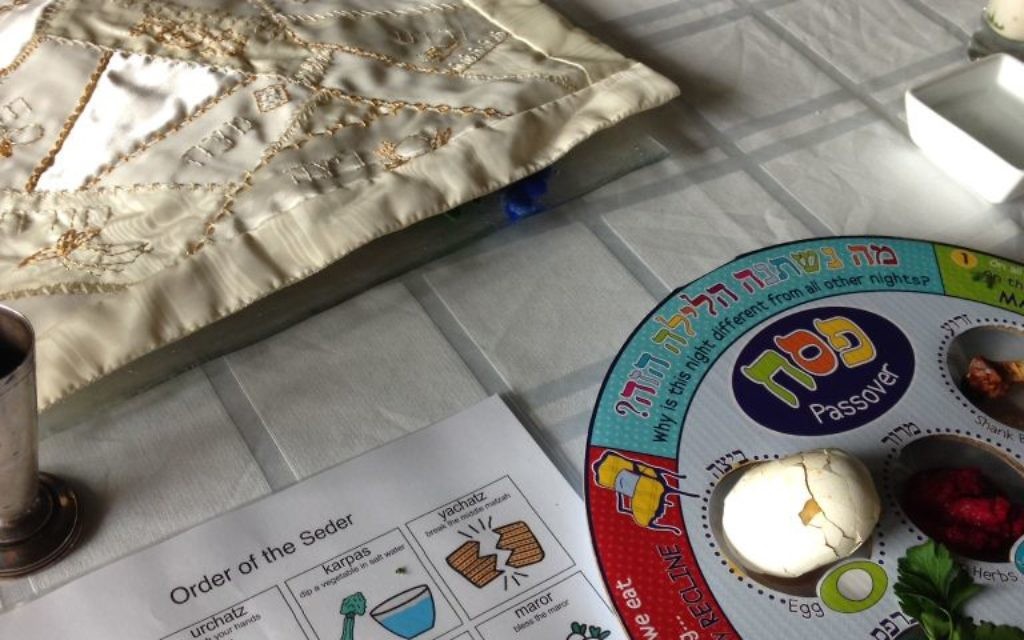 Passover has long been a challenging time of year for our family. Last year, in a piece about difficulties our family has attending seder, I wrote this:
Each year we hope that it will be better. That a year of further maturation and therapies will make it easier on Ben. And, therefore, for me too.

This year, however, we decided that hoping was not enough.

We needed to be proactive and make a radical change. Which is why Warren and I made the decision to have our own seder at home for just the five of us. Rather than rely on some hoped-for maturation, we decided to change the entire paradigm for Ben, and for our entire family.

But by remaining in Pennsylvania, our choice also provided us the opportunity to take an experience that has been fraught with anxiety, frustration, and disappointment and change it into something positive and wonderful.

So we set out to create a seder that would be a meaningful experience for Ben and our other kids, keeping in mind these four stumbling blocks:

1. Late nights (in Ben’s case, anything after 7:30 p.m.)
2. Wearing “scratchy” clothing (Ben has some sensory issues and prefers to wear certain material that is less painful to him)
3. Doing anything that will draw attention to himself (such as reciting the Four Questions)
4. Food (Ben likes certain foods and has aversions to particular smells and textures)
Solutions:

1. Our seder began at 5:10 p.m., a full two hours (and 12 minutes, to be precise) before the official candle-lighting time. And while it felt weird to be sitting down to seder at what felt like the middle of the afternoon, this adjustment meant that Ben was able to be fully awake and present. If each one of us is commanded to participate, then it made sense to move the time of the seder to a time that worked best for Ben.
2. Everyone was given the choice to wear whatever felt most comfortable. Ben wanted to wear short and flip-flops. Fine. If part of this holiday is about celebrating freedom, then it made sense to release Ben from his narrow place.
3. We recited the Four Questions together and then answered them. Traditional? Not in the slightest. But the conversation that began that night carried over into the rest of the week. If we are meant to tell our children the story of what it was like when we went forth from Egypt, we need to find ways to engage them in meaningful and developmentally-appropriate dialogue.
4. The food was kid-friendly and plentiful: individual veggie and kosher-for-Passover dip crudite at each setting, lots of hard-boiled eggs and baked potatoes for those who find the texture of kugel “too weird.” If our children are to eat all of the prescribed foods at their prescribed times, we decided to fend off the hunger pangs before they led to meltdowns.

As for the seder itself, we ditched our usual Haggadah. We knew that in order to keep Ben and his sidekicks/siblings engaged, brevity was going to be the key to our success, and it felt like cheating to keep announcing the huge chunk of pages we were skipping. I laminated a downloadable visual support of the order of the seder from Gateways: Access to Jewish Education and placed one next to each dinner setting.

Not only could Ben see where we were at all times, but it alleviated the anxiety of not knowing what is coming next. (It was great for our seven-year-old as well.) Rather than just tell the story of the Exodus, we did it as an add-on story with everyone participating and sharing his or her knowledge.

Was it perfect? Structurally, not yet. There are things that we will fine-tune for next time, including some more resources from Gateways.
But Ben said that it was his best Passover ever. And given that it was the seder in which he has been most engaged, we count this as a huge win.

Rabbi Rebecca Einstein Schorr is a CLAL Rabbis Without Borders Fellow whose work appears regularly on the Rabbis Without Borders blog and Kveller.com as well as a variety of other online sites. Writing at This Messy Life (www.rebeccaeinsteinschorr.com), Rebecca finds meaning in the sacred and not-yet-sacred intersections of daily life. Follow her on Twitter @rebeccaschorr.