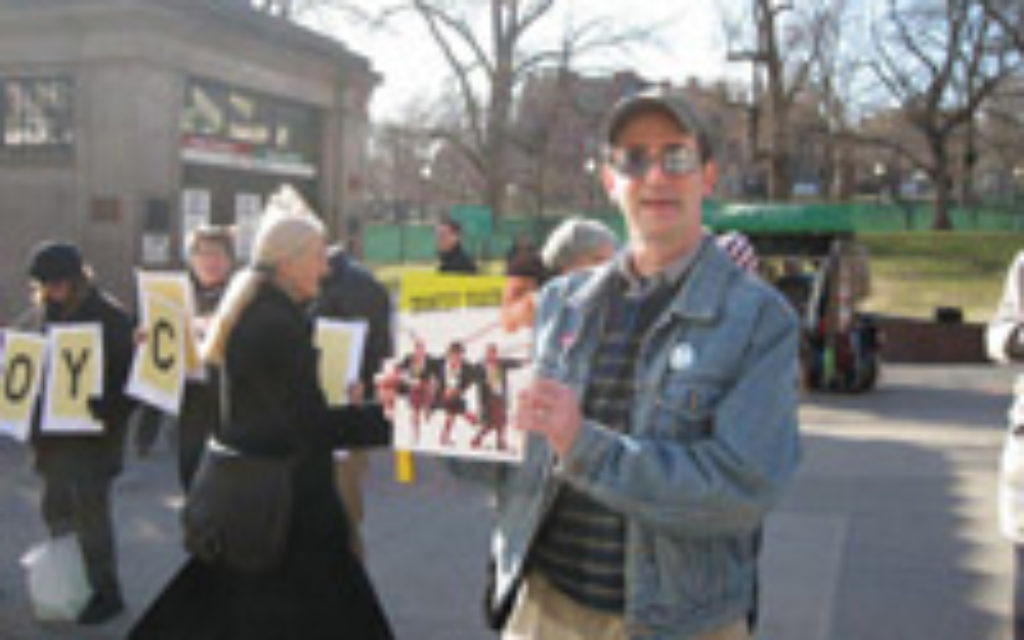 The proposed boycott of Israeli products at Brooklyn’s Park Slope Food Co-op, scheduled for a vote Tuesday night, isn’t the first such battle involving a community institution, and it won’t be the last.

But in each of those fights, including the one in Park Slope, ordinary people who never before led a cause or campaign have emerged as leaders, keeping the story a fresh one.

Barbara Mazor, the founder of More Hummus, Please at the Park Slope Food Co-op, is one example. The 55-year-old resident of Midwood, a member of the co-op for 23 years, said she felt compelled to act because she has read about the divisive battles at other co-ops and “didn’t want to see the same thing happen at mine.”

Another example is Jon Haber, a resident of the Boston area who, in the past eight years, has become a key resource for anti-BDS activists, publishing a blog on the boycott movement and efforts to counter it.

Speaking of Mazor and her motivations, Haber said, “I’ve seen that type of experience — I’ve lived it myself. People who had no leadership in the past feel galvanized to move” when something they care about or identify with, such as Israel, comes under attack.

It also explains why so many BDS efforts “are rejected by huge majorities,” Haber added. Members of co-ops and other institutions “become sensitive to the fact that BDS is demanding of their organizations something they don’t like.”

Haber and Mazor spoke of their involvement in anti-BDS efforts as the three-year battle in Park Slope nears a crucial juncture — a vote this Tuesday among co-op members on whether or not to hold a referendum on boycotting Israeli products. More than 1,000 of the co-op’s 16,000 members are expected to participate in the vote, which was set by the co-op’s Agenda Committee as part of the store’s monthly meeting.

The meeting, open only to co-op members, is scheduled for 7 p.m. at Brooklyn Technical High School in Fort Greene.

The controversy in Park Slope stretches back to 2009, when one of the co-op’s members, an artist and filmmaker known as Hima B., rose at a general meeting to suggest a boycott of Israeli goods. Her comments prompted a flurry of newspaper articles, followed by angry letters in the co-op’s biweekly newsletter, but the issue died down until last summer. Since then, members of the co-op have divided into two factions — a pro-BDS group and Mazor’s anti-boycott group.

Leading such battles is relatively new to Mazor, whose involvement on behalf of Israel was previously limited to attending the annual Salute to Israel Parade and contributing to Stand With Us, the pro-Israel advocacy group. But in Haber’s case, it dates back to 2004, when the BDS movement targeted the Board of Aldermen, or city council, in Somerville, Mass., where he lived at the time and where he viewed himself as a “garden-variety activist.”

The city’s aldermen initially voted for the BDS resolution, which called for divesting the city’s retirement fund of its holdings in Israel Bonds, Haber recalled. But they also opened the subject for public discussion, leading to an “uproar” and to a reversal of the earlier vote. Meanwhile, a leader in the fight against BDS was born.

Haber soon began writing about BDS activities around the country, along with efforts by Jews and others to counter those activities. He created his blog — Divest This! — in 2009, has traveled around the country to assist anti-BDS activists and works with any and all organizations opposed to BDS, from groups on the right, like the Zionist Organization of America, to established local and national agencies like local Jewish community relations councils, to those on the left, such as J Street.

BDS campaigns target only progressive audiences, Haber said, adding that their tactic is to “find a progressive organization, exploit the language of human rights and democracy, and then insist that the organization adopt their resolution if it wants to be thought of as progressive.” In the vast majority of cases, it’s these same “progressive communities” that have been the ones “voting down these resolutions.”

For that reason, Haber said, he works with people on both sides of the political spectrum and rejects what he calls “the entire left-right paradigm. Categorical thinking shouldn’t replace independent thinking,” he added.

Haber’s reference to “the language of human rights” used by the BDS movement alludes to claims that Israel is an “apartheid” state or, in the case of food co-ops, the latest target of the BDS activists, the idea that food is political.

Of the first claim, aimed at swaying Americans who supported the boycott of South African goods decades ago, Haber noted that most citizens had reached a firm consensus over the evil of South African policies while no such consensus exists over the Israeli-Palestinian conflict. Of the second claim — that food is political — Haber called that concept an “elastic” one.

“I have strong opinions about the Mideast,” he said, “but I’d never in a million years ask a food co-op in my community, or my school, to become a conduit for those beliefs.” On the other hand, he added, BDS activists have a tendency to “keep pushing” their views on organizations or institutions that never would have anticipated such battles, causing anguish and division in the process.

The controversy in Park Slope is coming to a head just as voices are being raised in the Jewish community over the concept of a targeted boycott — a boycott aimed at goods produced in West Bank settlements, rather than a global boycott, aimed at Israel products in general.

In an op-ed this week in The New York Times, Peter Beinart, a professor at the City University of New York and author of the upcoming book “The Crisis of Zionism,” argued that a global boycott is aimed not only at ending Israel’s occupation of the West Bank, but at dismantling Israel as a Jewish state. (See Gary Rosenblatt’s column on page 1.) On the other hand, he wrote, a boycott of West Bank settlements could save Israel and is, therefore, one that American Jews should support.

The op-ed has prompted a flurry of responses objecting to that view, including a letter to The New York Times from Abraham Foxman, national director of the Anti-Defamation League; a statement from Rabbi Ammiel Hirsch of Manhattan’s Stephen Wise Synagogue; and columns by others who, like Beinart, support a two-state solution.

One of those who disagree with Beinart is Ken Bob, president of the progressive Zionist group Ameinu, formerly the Labor Zionist Alliance. While he understands the frustration and anger of those who oppose the occupation, Bob said, he believes talk of a targeted boycott often gets “lumped” by Jews and non-Jews “with the anti-Israel, global BDS movement,” confusing observers even more. It also hardens the Israeli position, Bob said, rather than focusing on what must be done.

In Brownstone Brooklyn, which includes Park Slope, the issue has played out among the area’s rabbis, most of whom distributed and signed an interfaith statement opposing the proposed boycott at the food co-op.

One of the few Jewish clerics who didn’t sign the statement was Rabbi Ellen Lippmann of Kolot Chayeinu/Voices of Our Lives, who wrote a letter to congregants explaining her decision to remain neutral in the battle.

“I find myself standing in the middle,” the rabbi’s letter said. She’s not a supporter of BDS, the letter adds, but she does favor a boycott of products from West Bank settlements.