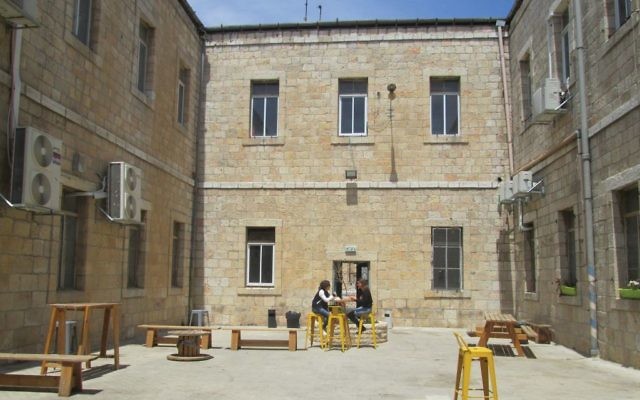 The courtyard of the Alliance House arts center in the heart of Jerusalem hosts large parties.

Jerusalem — Unlike many young Jerusalem artists and performers, Adi Yair isn’t planning her escape to Tel Aviv, which most Israelis consider the cultural capital of Israel.

“My dream is to stay in Jerusalem and spread my art all over the world,” said Yair, a native Jerusalemite who graduated from the city’s prestigious Bezalel Academy of Arts and Design. “I grew up here. I like the spirit, the people. You know everyone. Jerusalem is like a big family.”

For the next couple of years at least, Yair, who creates sophisticated women’s apparel, much of it made from fabric she has woven, has an enviable place to work in downtown Jerusalem, thanks to a collaboration between a real estate developer, the Jerusalem municipality and New Spirit, a nonprofit organization launched in 2003 to bring about social change to the city.

Last year real estate developer Amir Biram bought Alliance House, a former school built in 1881 next to what soon became the Mahane Yehuda shuk, with plans to turn it into a hotel. He is loaning the building to New Spirit to house artists, dancers, designers and others until the municipality approves his building plans. That should take two to five years.

Before artists could move into the abandoned three-story stone building, however, it had to be cleared of debris and its interior modernized.

During a tour of the building she provided to The Jewish Week, Casey Girard, New Spirit’s director of resource development, recalled that the building was “derelict and rundown. There were junkies’ needles and a lot of pigeon droppings.” 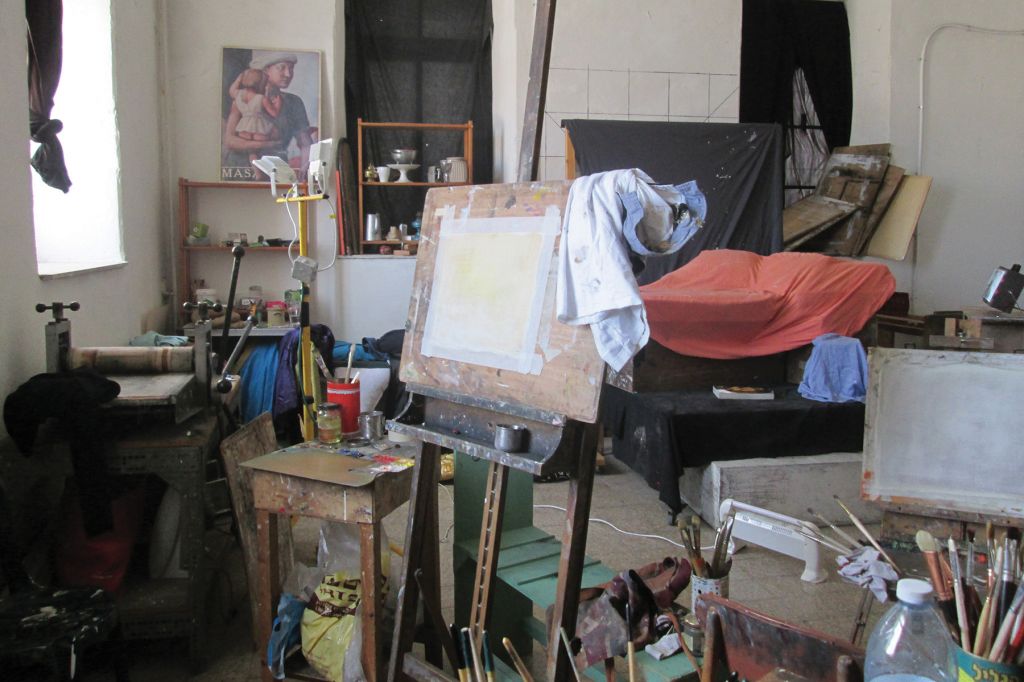 A studio at the center

After Biram, who was on New Spirit’s board, offered the organization the building on a temporary basis, it took just three months to make it habitable, though renovation is still a work-in-progress.

The Alliance House boasts a large inner courtyard where events, including large parties, are held in good weather. It has high ceilings and an abundance of tall windows. The ground-floor features the studio Adi Yair shares with other artists, as well as a larger space. The top floor contains New Spirit’s offices and several art studios and performance rooms. The middle floor will soon house the offices of Mass Challenge, a social incubator for startups.

The renovations, which were funded by government agencies, foundations and private donations (including one from Biram), cost about $190,000 — very modest for such a large, old building.

“Beit Alliance [Alliance House] is an essential part of our strategy to strengthen downtown Jerusalem,” a municipal spokesperson told The Jewish Week. It is “a perfect example of the rich, diverse renaissance happening in our city.”

Fifty years ago, when Jerusalem was reunited, the Mahane Yehuda neighborhood was a bustling place bordered by Jaffa Road, with small stone houses and the fruit-and-vegetable market. Today, those old houses have been gentrified, rents are sky-high and the market now boasts many trendy restaurants, all-night bars and chic shops alongside the stalls of produce vendors. The refurbished Alliance House, with its young colony of artists, fits right in.

Biram told Haaretz that “it is possible to make an agreement with a familiar nonprofit organization, and everyone benefits. Suddenly you hear music booming, young people coming and going. Passersby enter the building and are amazed at its beauty, including those who studied here in the past, like my mother.”

Indeed, during a recent spring night, young people in their teens and 20s prepared for an all-night party of up to 1,000 of their peers in the building’s courtyard and sprawling parking lot, which is far enough away from residential buildings to permit a lot of noise. 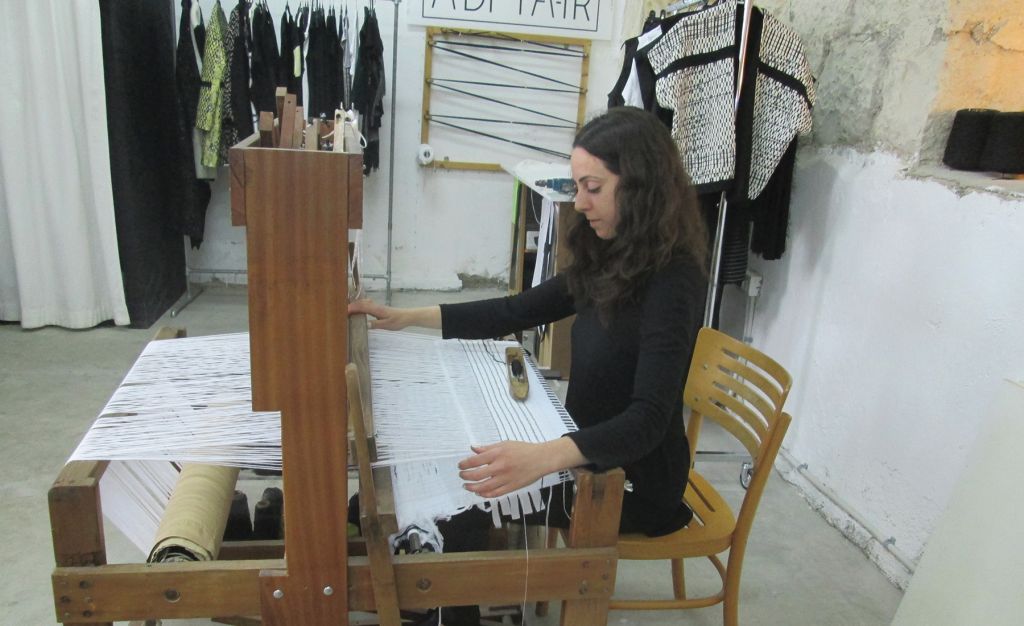 Seated on a narrow wooden bench in the courtyard with some friends as the party was getting started, Noam Bogot, who recently completed his army service, said parties at Alliance House “attract quality people. Jerusalem isn’t a party city, and I think that’s a good thing, but young people need to have a safe place to drink a beer, to dance.”

Most of the time, though, the building is bustling with more creative pursuits.

A plaque by the entrance lists the many grassroots organizations utilizing the space: a dance troupe, a theater troupe, art studios — including one for female charedi artists. There are spoken Arabic lessons and yoga. Writers, journalists and academics are encouraged to hang out together in a room called the Lounge while Jerusalem residents who are no longer charedi come together for social events.

On the evening of the mega-party a group of former charedim, women and men, sat in a large comfortable room in chairs arranged in a circle as one of the members strummed a guitar. Others stood around schmoozing.

“People like the atmosphere here,” said Meir Viner, who left the charedi world several years ago. “There’s so much culture here for everyone, secular and religious.”

In the colorful charedi women’s art studio, where the paintings, drawings and sculptures of six artists can be seen, side-by-side, in varying states of readiness, artist Celia Tawil explained why the studio at Alliance House is so important to her work.

“As far as I know, this is the first charedi art studio in the world,” said Tawil, who has recently been inspired to paint images of Israeli soldiers because “we are all soldiers of Hashem.”

Tawil said there are art programs for charedim in Israel and abroad, but not studios. “Were it not for this space, I would be working at home. Being here gives me a sense of community.”

Seated at her loom in the studio she shares with a leather designer, a jewelry designer and a menswear designer, Yair said creating and selling what she calls “wearable art” at Alliance House “has afforded me a huge opportunity to work together with other artists. I feel inspired by them when we meet in the kitchen or our respective workspaces. There is already cooperation.”

Yair excitedly related how, when the head of the dance troupe saw her designs, she asked Yair to create some of the costumes.

In another instance, a painter asked Yair to supply some solid-colored clothes that the artist intends to paint.

“A lot of clothing designers move to Tel Aviv,” Yair noted before explaining that “there aren’t enough people in Jerusalem who appreciate fashionable clothes,” to keep most designers in business.

The drawback of working in Tel Aviv, she said, is that “it’s hard to be individualistic. I’ve heard it said that Jerusalem is the kitchen and Tel Aviv is the dining room. In my opinion, most creative work is cooked here, in Jerusalem.”