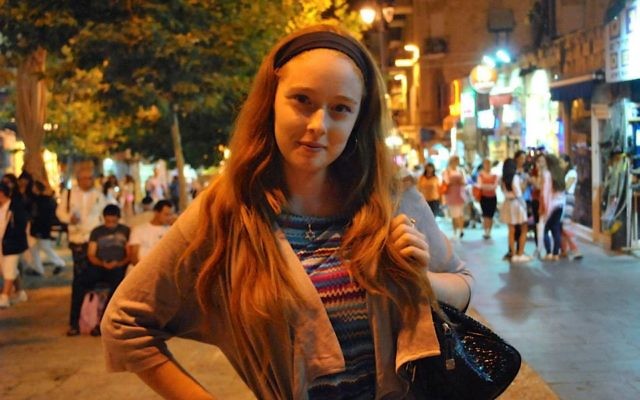 Many in the Jewish community seem to be transfixed at the moment with the ongoing voyeurism scandal concerning Rabbi Barry Freundel. A flood of articles has been published throughout the United States and Israel focusing on the details of the police investigation or debating mikvah politics and Orthodox Judaism. These are important issues, but they're a bit abstract. They can't answer the question of what it feels like to be a potential victim of Rabbi Freundel. What was it like to go through a conversion with him?

I can answer that question. My name is Stephanie. I am a 22-year-old graduate student in the Washington, D.C., area and I began converting with Rabbi Freundel over a year and a half ago. I was one of the conversion students who did ‘practice dunks.’ Now I'm waiting to find out if he videotaped me in the mikvah.

I grew up celebrating my maternal Jewish heritage–though my mother's line is Jewish, her family converted to Christianity a few generations back. Then, as an undergraduate, when I found myself becoming more traditional in my observances, I decided to do an Orthodox conversion. I thought I was fortunate to be living in the same city as Rabbi Freundel, who was well known for his conversions.

At first my experiences with him were positive, and I was delighted with my decision. However, as time progressed I began having more difficulties. I started to see him as being very judgmental. He would disparage surrounding communities as not being truly Orthodox or comment on an individual congregation member’s observance level. I chose to keep my personal life to myself for fear of what he may say about me to others.

Although I was very cautious around him, I continued my conversion. Then, some time later, I began having issues with some of the male congregants saying sexually inappropriate things to me. It was at that point that I went to Rabbi Freundel for help, but he seemed to simply shrug the problem off and explained to me that as a young, attractive female, this was going to happen in any community. He then remarked that if he were younger and single he would be interested in me as well.

Over the period of my conversion process, Rabbi Freundel would remark in various conversations that I was a young, attractive female, especially during times I mentioned I was in no rush to get married. I went to several congregants with my concerns but they dismissed them. Eventually it got to the point where I kept my meetings with him brief. I would just simply tell him I was observing and studying as I should, and then just leave. Even attending services on Shabbat I kept brief. I went to pray and avoided associating with other congregants during social activities afterwards. Not only did I feel uncomfortable with him; I felt uncomfortable being in a community where the majority of the congregation seemed to follow him without question.

By the time I graduated with my bachelor’s degree I was barely speaking with him and had cut many of my ties to the Kesher Israel community. Over the summer, I returned home and had little communication with Rabbi Freundel. Upon returning to the D.C. area for graduate school, I moved to Maryland, in large part to escape Rabbi Freundel and the people that followed him blindly. Eventually, I came to the decision that I needed to discontinue my conversion with Rabbi Freundel. I decided that I would wait till the chagim (holidays) were over and then I would sit down with him and tell him I was done with wanting to complete my conversion with him.

However, I was never able to do that. Before the chagim were over, I learned of his arrest and that he was being accused of voyeurism in the mikvah. Over the course of my conversion studies with Rabbi Freundel, I had done two mikvah dunks. At first, upon hearing of the voyeurism charges, all I felt was anger. Anger that he may have videotaped me. Anger that he may have videotaped countless converts, married women and students. Anger at wondering if he felt joy over knowing how many people he has hurt. How could this have happened? Why did people not take complaints made against him more seriously? Why had people ignored me when I discussed my issues with him?

After a week, my anger gave way to a full depression. I began to find myself obsessing over this, going over every detail of the past year and a half. The only part of my conversion process that I cannot go back to in my mind are those immersions. I remember bits and pieces, but I don’t know if I can ever allow myself to fully remember. How can I, when I know someone may have videotaped and watched me? I have begun to find myself crying at random times throughout the day, whether it be sitting in a Starbucks or picking out dinner at the grocery store. I don’t know how to dress anymore. Even undressing in the privacy of my own bedroom is difficult right now. I can only wonder what other potential victims might be going through.

I know there are people who would wonder why someone like myself started a conversion process with Rabbi Freundel, or why I stayed so long. These are questions that are going to personally plague me for the rest of my life. All I know is that I justified it by telling myself that this conversion process would be the best for my future children. If I didn’t do this, then they may have to go through this process themselves one day. That was a thought I couldn’t bear, so I kept going.

Now I am choosing to speak out, not only for my children someday, but for future generations. There are many who will not like to hear what I have to say. That has become painfully obvious over the past week. But if potential victims like myself don’t speak out then tragedies like this will only continue happen. Sexual abuse is a problem that occurs in every religious group, but it only continues when those communities fail to speak out.

As I now struggle with blaming myself for what has happened, I can only look forward. Forward to a life where I continue to speak out. A life where I help others who have experienced abuse in their religious communities. But for now, like other countless potential victims, I have to wait, wait for days upon days until we receive a phone call telling us whether or not videotaped footage of us was found.

Stephanie Doucette is a graduate student in international studies at George Washington University in Washington, D.C.