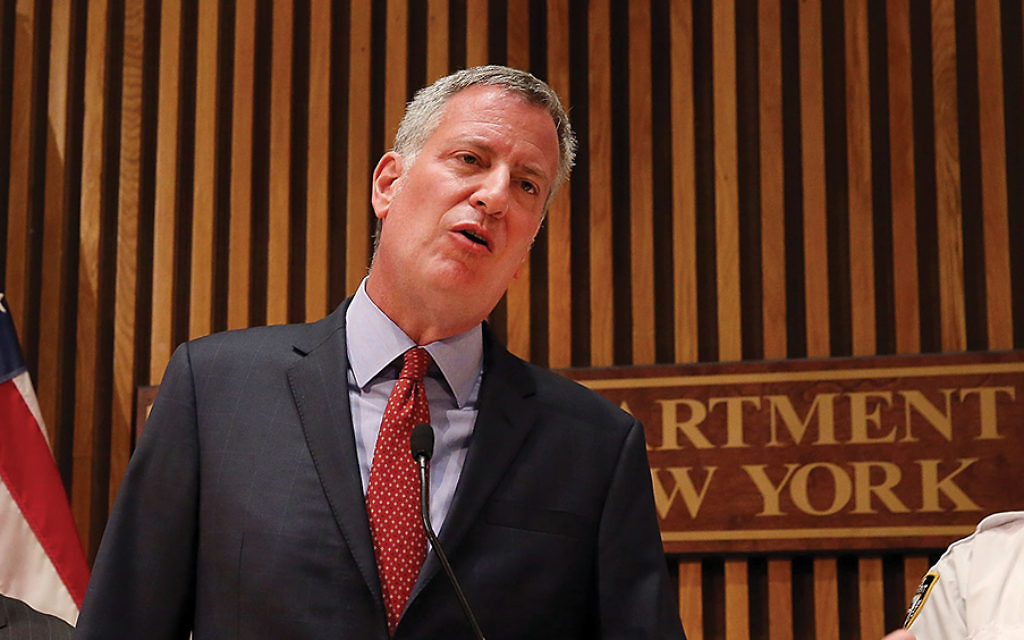 The only way to find housing in New York, advised one Jewish professional, is to be rich, lucky or poor. The rich can afford it, the lucky can find it, and the poor are subsidized.

However, in a city where even the poor better be lucky, the City Council, acting on one of Mayor Bill de Blasio’s top priorities, has added mercy to the equation, passing a bill that would require new housing, in areas rezoned for growth, increased height or density, to designate at least 20 percent of the units for low-income families.

In a city where the Met Council on Jewish Poverty recognizes 507,000 Jews (1-in-4) as poor or near-poor (1-in-9), and an additional 100,000 just above that bracket, who say they are just managing to make ends meet, “there’s going to be considerable benefit for folks in those categories,” said City Councilman David Greenfield.

Greenfield, who says he represents more Jews than any other elected official (his district includes Borough Park, Midwood and Bensonhurst), chairs the Council’s Committee on Land Use, putting him in the center of the new initiative. The new plan (officially known as Mandatory Inclusionary Housing) is primarily geared for those making 40 percent of the city’s median income ($31,000 for a family of three). Several neighborhoods have been discussed as the first areas, but hardly the last, to be rezoned under the new law, including several Jewish neighborhoods in once-declining areas — such as Inwood, East Harlem, Long Island City, East Flatbush — that have been inching to revival, not the least because of proximity to stronger Jewish neighborhoods that provide Jewish infrastructure.

The zoning plan allows for taller buildings with greater density, creating more apartments at market rents, compensating landlords for the low-income apartments. Future zoning changes may assist even middle-class families, such as designating 30 percent of the apartments for people making 115 percent of the median, or $89,000, with higher rents.

David Pollock, associate executive director of the Jewish Community Relations Council, wrote in The Jewish Week, back in 2009, that “the biggest challenge for Jewish continuity in New York is affordable housing,” and the problem has only worsened. “I was talking about Manhattan, or Manhattan wanna-be neighborhoods,” he said, looking back, but “now the challenge is anywhere. The lack of affordable housing is a huge problem.” He sees the greatest benefit of the bill coming for senior housing. “We have a disproportionately geriatric population.”

Several observers noted that because Jewish neighborhoods are expanding beyond traditional borders into outlying lower-income areas, in some cases neighborhoods such as Williamsburg and Crown Heights are on the verge of touching.

“Drive along Bedford Avenue and you’ll see it,” said a Jewish professional who asked for anonymity because of the sensitivity of housing issues. “Do we see Williamsburg moving south and Crown Heights moving north through Bedford-Stuyvesant? Absolutely. East Flatbush will be one of the first neighborhoods to be rezoned (under the new legislation); the move of Jews into East Flatbush is palpable. More and more Jews are moving into neighborhoods that had almost emptied of Jews.”

Orthodox Jews have been moving to Rockland County (the expanding Orthodox community in Monsey there has made Monsey the generic name for almost all Orthodox life in Rockland) and Lakewood, N.J., for want of housing in the city.

Greenfield said, “The rent burden is one of the most significant issues they have. A lot of Jews are being squeezed out. Every week, I see a family leaving Borough Park, or Midwood, or Manhattan, moving outside the city to places that are cheaper. The idea that relief is coming, with the proposed 80,000 units of affordable housing in the next few years, is significant. People can have hope.”

Many of the rezoned areas have no, or scant, Jewish infrastructure, said Pollock. “Jews are making choices. Right now, you have a very notable increase in the Orthodox population of East Flatbush. Do they have to go back to the core Jewish neighborhood to shop, and walk further to shul? Both are happening.”

In Inwood, at the northern tip of Manhattan, the last two shuls closed decades ago, as the neighborhood became increasingly Dominican. The neighborhood, however, is adjacent to Washington Heights, center of a real estate boom for young Jews, a boom that has overflowed north of Dyckman Street into Inwood.

Other Jewish organizations have begun to provide services to reviving neighborhoods. The Kings Bay Y (on Nostrand Avenue) has opened up a branch in North Williamsburg. On the Y’s website, we’re told, “North Brooklyn has seen a large increase in the non-Orthodox and interfaith Jewish population over the last few years, and the vast majority of the people moving there have young children,” said Leonard Petlakh, executive director.

Pollock of the JCRC says, “I was talking to City Councilman Jimmy Van Bramer, who said that when he was campaigning, he was struck by how many apartments in Long Island City had mezuzot. You don’t think of that as a Jewish neighborhood,” or rather, you didn’t.

The mayor’s office says the new plan “will secure 200,000 affordable apartments by 2024 — enough for half a million people. It’s a plan that delivers for seniors, for people with disabilities, for veterans and for working people of all kinds — from carwash workers to teachers and first responders.”

Greenfield said, “We’re looking at a breadth of new affordable housing that we believe will be created. At the lowest level, 20 percent of a new building would have to be at 40 percent AMI [area median income], which translates to $33,000 for a family of three, with a two-bedroom rent of $775 a month. On a higher level, it can go up to $120,000 for middle-class families.” Half of the new AMI units will be designated for those already in the neighborhood. “The city has a registry for future availability, which anyone,” in or out of the neighborhood, “can sign up for at nyc.gov. I think that’s going to benefit a lot of people in the Jewish community.

“People will start taking a second look at neighborhoods where there are opportunities,” Greenfield added. “In New York City, you can put your kids on a school bus, or drive to a mikvah or kosher supermarket, whatever Jewish resource you need.”

The bill is designed to encourage mixed-income neighborhoods while protecting longtime residents. Martin Englisher, executive vice president of the Washington Heights & Inwood YM & YWHA, said, “Rents are up 50 percent in five years. People are opening businesses left and right and landlords are investing in housing that they let rot. People in rent-stabilized apartments continue to stay there. They’re not affluent, that’s for sure.”

Many of the low-income Jews in Inwood are elderly, said Englisher, adding that the Y owns and operates 100 units of low-income senior housing. The Y, he said, has been working closely with the local Chabad, providing the infrastructure to sustain a Jewish community of whatever income. Other shuls and kosher shopping is close enough in Washington Heights. The Y “provides all the things,” such as childcare, after-school and senior programs, “needed to support Jewish family life.” Englisher said “maybe 60 percent (3-4,000) of our fee-paying members are Jewish.”

In the 1970s, Englisher recalls, “Mayor Koch came up here and said ‘If Washington Heights-Inwood will go under, so will New York City.’ We have all the things you need: subways, parks, great housing stock, if we did go under then something is wrong with New York City. The crime rate is now about 10 percent of what it was in the early 1990s. Twenty years later, we’re a destination neighborhood,” for the rich, the poor and the lucky.