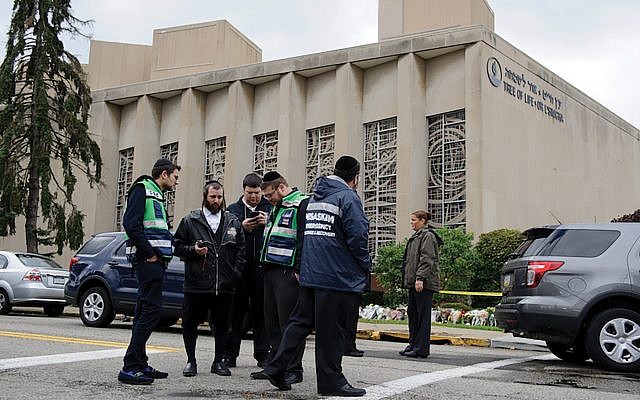 The Tree of Life synagogue in Pittsburgh just after the Oct. 27 murders. In the wake of the attack, the Secure Community Network has received more than 500 requests for its security services. Getty Images

As a year marked by the massacre at a synagogue in Pittsburgh and an uptick in anti-Semitic incidents came to a close, many in the Jewish community are hoping that 2019 will be marked by increased security and safety education at synagogues and community organizations across the country.

Jewish communities here and across the country are increasingly facing safety threats. The NYPD says anti-Semitic incidents here are on the rise, with 352 hate crimes as of Dec. 23, of which 183 were anti-Semitic, according to a report in Patch. There has also been a series of incidents in Brooklyn in which Orthodox Jews, dressed in distinctively Jewish dress, have been targeted on the street.

For groups like SCN, the spate of anti-Semitic incidents, and the increased awareness of it, has led to an increase in demand for its services. The organization has received more than 500 formal requests for services in the last eight weeks, according to Masters. Other organizations and donors have also stepped in to assist with security needs. In November, the Paul E. Singer Foundation pledged at least $1 million to increase security at community organizations in New York City. The funds will be disbursed as grants through UJA-Federation of New York, which, along with the Jewish Community Relations Council of New York, has long assisted synagogues and community organizations throughout the city with security plans.

Masters applauded the responsiveness of the NYPD and the strong relationship between the department and the New York Jewish community. “Of course, the uptick in anti-Semitic incidents that we’ve seen in New York is replicated across the country,” said Masters. “In places that are far less capable or used to dealing with those issues or that have law enforcement partners that are not as strong or as well-versed in dealing with those sorts of issues, that presents definitive challenges.”

In spite of the recent attacks, it is clear that security trainings have saved lives. In the case of the Tree of Life shooting, the first call to 911 on the morning of the attack was made by Rabbi Jeffrey Myers, the synagogue’s spiritual leader. Rabbi Myers had decided to carry a cell phone every Shabbat after a security training at the synagogue several months before the attack.

Said Masters: “There is a real understanding within the community that, whereas in the past, certain people were focused on safety and security issues, this is something that now involves and encompasses all of us as members of the community.”