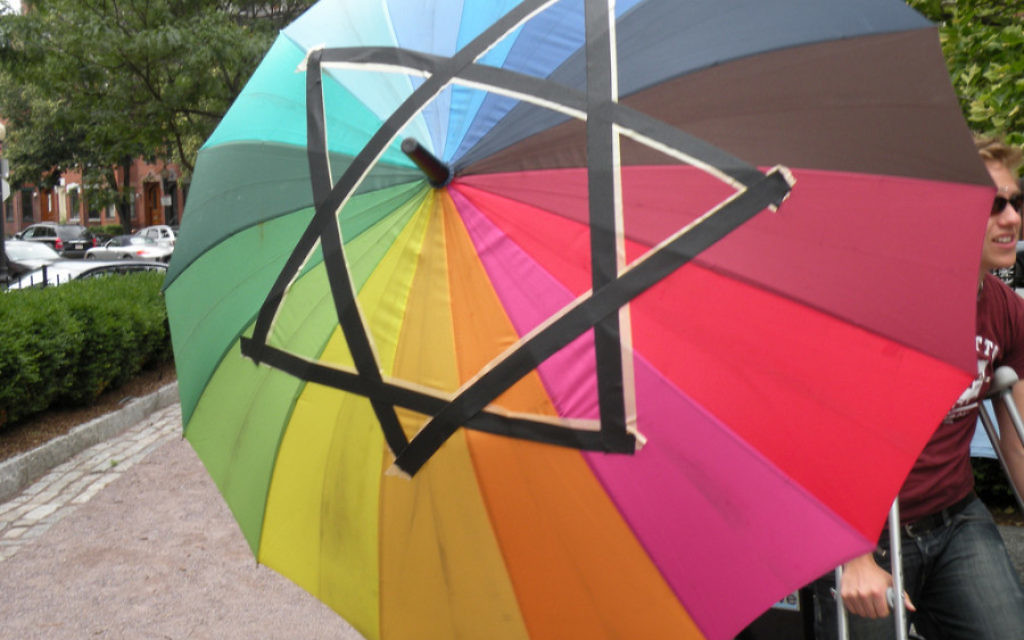 Ari Lev Fornari, a rabbi and prison chaplain, never heard the word “transgender” until his sophomore year of college.

“It didn’t come up in my childhood,” said Rabbi Fornari, who grew up attending Temple Beth-El, a Reform congregation in Great Neck, L.I. Though his community welcomed gay and lesbian members, the conversation hadn’t moved beyond those gender-static labels.

For Rabbi Fornari, who came out as transgender in 2005, the resolution passed at last week’s Union for Reform Judaism (URJ) Biennial affirming and advancing the movement’s commitment to full equality and inclusion for transgender Jews was cause for celebration.

The “Resolution on the Rights of Transgender and Gender Non-Conforming People” — which calls for shuls and camps to have gender-neutral bathrooms, encourages gender-neutral language, suggests training on gender issues for religious school staff and encourages advocating on behalf of the transgender community — is being heralded as the most far-reaching resolution in support of transgender rights of any major religious organization.

“Knowing that members of the transgender and gender-nonconforming communities are often singled out for discrimination and even violence, we are reminded of the Torah’s injunction, ‘do not stand idly while your neighbor bleeds,’” the resolution reads, quoting scripture several times.

Today, even the most conservative religious institutions are confronted with LBGT concerns. Over the weekend, the Church of Latter-day Saints, known for its opposition to gay marriage, lost more than 1,500 members over a new policy that prevents children of same sex couples from being baptized and declares members in gay marriages to be apostates subject to excommunication.

And while other religious bodies, including the Episcopal Church, the United Church of Christ and the Unitarian Universalist Association (UUA) have approved resolutions affirming equality for transgender people, none, say observers, go as far as the one offered by the Reform movement, which, with roughly 1.5 million members, represents about one-third of American Jews, by far the largest Jewish denomination.

Annette Marquis, LGBTQ program director at the UUA, clarified that while the Reform edict does go further than any other large religious organization’s resolution to date, this is partially because Jewish rituals are gender specific in a way that Unitarian rituals are not. For example, the bar or bat mitzvah ceremony, a complicated topic of conversation with regard to transgender teens, is not an issue for Unitarian Universalists, whose coming-of-age ceremony (which comes at age 15, not 13) is gender neutral, she said.

“Transgender is a harder thing for people to grasp than gay or lesbian because it challenges the basic construct of how we divide the world,” said Marquis, a lesbian who grew up in a strictly Catholic home. The UUA was among the first religions to ordain lesbian and gay ministers, doing so in 1979; the first openly transgender minister was ordained by the UUA in 1988. The next hurdle, the wide acceptance of transgender congregants within the Unitarian Universalist movement, is going to take “a lot of work, and a lot of time,” she said.

Reform transgender Jews are also aware of the work ahead. For Rabbi Fornari and other transgender Jews, excitement is tempered with caution. He described how he continues to experience “professional anxiety” as a leader in the community, despite being out for over a decade.

“The anxiety is about whether or not we can have an authentic connection and the ways in which people’s discomfort and fears and own anxiety is a barrier to our connection,” said Rabbi Fornari, 33, who lives in Boston with his partner and their 1-year-old child and directs the Boston-Area Jewish Education Program.

Rabbi Elliot Kukla, the first openly transgender person to be ordained by Hebrew Union College-Jewish Institute of Religion, the Reform movement’s seminary, said that while the resolution was “heartening,” deep-rooted prejudices still exist, even in the URJ.

“People still question me as a trans person in this world,” said Rabbi Kukla, 41, a spiritual leader at the Bay Area Jewish Healing Center in San Francisco. Walking into a bathroom in an average URJ congregation, he continues to attract strange looks and stares, he said. Reform rabbis may now give sermons about the importance of welcoming transgender Jews, “but my presence,” he said, “still raises a lot of discomfort.”

While the visibility of transgender people has been increasing, rates of unemployment, poverty, suicide, discrimination and violence against them remain high, he said. According to a recent study by the American Foundation for Suicide Prevention, 41 percent of gender nonconforming people have attempted suicide, compared to 4.6 percent in the general U.S. population.

“The work of true inclusion is more than a sermon or a standing ovation at the biennial,” said Rabbi Kukla. “It’s a conversation about class and privilege.” While the recent coming out of former Olympic champion and television personality Caitlyn Jenner has captured public interest, many transgender people can’t afford the medical procedures and upkeep — like hormones and electrolysis — to present themselves “as they would like.” In fact, many who are struggling with unemployment can’t even afford synagogue membership, he said.

“We’re a lot more comfortable with a Caitlyn Jenner than with a transgender woman who’s 6 feet tall and still has stubble,” said Rabbi Kukla. “That’s the real test of inclusion. It’s a lot easier to welcome people who look just like us, and who conform to our expectations of gender.”

Rabbi Kukla also pointed out that the Jewish community has been much quicker to embrace transgender men (those who transition female to male) than the reverse. Several transgender men, including Rabbi Kukla, have moved into visible leadership positions within the Reform community, while the stigma in the other direction remains.

“In the Jewish sphere, becoming a man is still perceived as moving up in status, while becoming a woman is perceived as a step down,” he said. “A man in a dress is still seen as humiliating, while most can intellectually understand why a woman wants to become a man.” For Jews and non-Jews alike, referring to men as feminine is perpetually an insult, while referring to women as masculine is more often than not an accolade, he added. This “persistent sexism” continues to “infuse Reform Judaism, even though we’d prefer to believe otherwise,” he said.

Stephanie Bonvissuto, a transgender convert to Judaism, has found a spiritual home at her Reform temple in Stony Brook, L.I. Pursuing a dissertation in women and gender studies at Stony Brook University, the 51-year-old former Roman Catholic said her fellow Reform congregants never questioned her gender.

“I was welcomed into the women’s groups, including the synagogue sisterhood,” she said. At her conversion mikvah ceremony, the Reform rabbi presiding met Bonvissuto’s anxiety and embarrassment with reassurance.

Still, Bonvissuto looks forward to the day when she will no longer be the “token” transgender person in synagogue.

“I just want to be another woman in the congregation,” she said, describing how frequent pronoun fumbles among fellow congregants result in profuse apologies and blushes. “I don’t want to be the spokesperson anymore.”

According to Rabbi Fornari, the transgender resolution’s most significant contribution is shifting the burden of responsibility from trans individuals to the institutions they attend.

“My experience is that it’s uncomfortable to ask for what we as trans people need,” he said, giving examples of having to repeatedly ask people to use the right pronoun and the lack of gender-neutral bathrooms. “These still feel like big asks. For the Reform movement to say now those things are universally expected — that’s huge. The burden no longer rests on just one voice.”