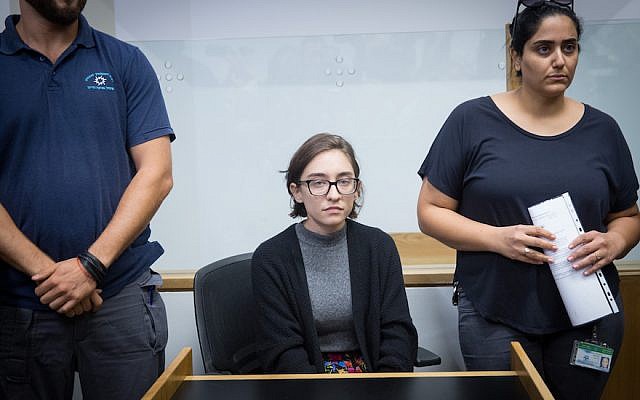 Lara Alqasem, a 22-year-old American graduate student, arrives at a Tel Aviv District court, Oct. 11, 2018. She is being held in detention at Israel’s international airport since last week over allegations that she promotes a boycott against the Jewish state. (JTA)

JERUSALEM (JTA) — The American graduate student being barred from Israel due to her alleged support for a boycott of the country had an appeals hearing in Israel’s Supreme Court.

Attorneys for Lara Alqasem have appealed to Israel’s Supreme Court to allow her to enter the Jewish state and begin her studies at Hebrew University in Jerusalem. Following Wednesday’s hearing, the judges will render a final decision on whether she can remain in the country.

Israel barred Alqasem, a University of Florida graduate, on Oct. 2 due to her alleged support for the Boycott, Divestment and Sanctions movement targeting Israel, or BDS. A 2017 law allows Israel to prohibit entry to BDS supporters. Alqasem has since remained at Ben Gurion Airport while appealing the entry refusal.

Two lower courts have upheld Israel’s decision to bar Alqasem. But following the hearing Wednesday, Leora Bechor, one of Alqasem’s attorneys, told reporters she was optimistic that the Supreme Court would rule in Alqasem’s favor.

“There is very much a sense that we’re going to get a different ruling, that we have judges that are not going to accept the state’s arguments,” Bechor said on the conference call Wednesday, adding that the judges were “unimpressed with the lack of evidence that has been presented.”

Israeli authorities say that Alqasem’s college activism shows that she supports a boycott of Israel, and that the country has the right to deny her entry.

Alqasem’s attorneys argued that the refusal to allow her to enter the country does not fit the criteria of the Strategic Affairs Ministry, under which it can deny entry to current “leading activists” working in a “consistent and continuous” manner. Alqasem was president for a short time of the University of Florida chapter of Students for Justice in Palestine, which supports BDS. The chapter at that time reportedly was comprised of fewer than a dozen students.

“Lara’s actions for SJP never met the legal test for a definition of a boycott under the law,” Bechor said. “In her role as president, she wasn’t engaging in BDS activism. She participated in a protest once. She didn’t organize a protest. It wasn’t part of her mandate, and the role of president is nominal at best.”

Alqasem has said publicly and in court that she does not support BDS.

While Alqasem has been detained at the airport, only her lawyers have been allowed to visit her — save for one visit from left-wing Knesset members. She has not been allowed access to her computer, cellphone or a pen and paper, though Bechor confirmed that authorities did give her a copy of “The Catcher in the Rye,” the coming-of-age novel by J.D. Salinger.

“We chose to join the appeal because of the importance we place on taking in foreign students and researchers. We are not afraid of Lara Alqasem,” a university representative told the court, Haaretz reported. “Her right to change her mind and to be exposed to life here must be respected.”

Alqasem was granted a scholarship for the graduate program at Hebrew University and a student visa from Israel’s consulate in Miami.