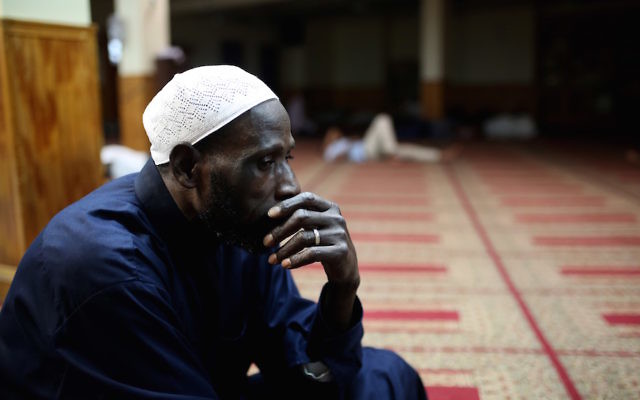 NEW YORK (JTA) — With Islamophobic hate crimes on the rise, Muslim leaders are working harder to secure their mosques and institutions. Some are turning to Jewish experts for assistance.

A few Jewish organizations have partnered with local and national Muslim groups to advise them on best security practices and advocate jointly for stronger hate crime legislation. Cooperation between the two communities, which was growing late last year, is turning toward the particulars of staying safe in a nervous climate — how to prevent attacks and handle hate crimes.

“When people start to feel unsafe in Sabbath or Sunday or Friday services, that can make for a very complicated and challenging set of circumstances,” said Paul Goldenberg, director of the Secure Community Network, which advises Jewish groups and institutions on security and has worked with Muslim, Sikh and Christian institutions on composing security plans. “Extremist groups have come to realize our houses of worship are an Achilles’ heel.”

Goldenberg has worked with Muslim groups for years, coaching them on everything from forming relationships with local law enforcement to receiving grants from the Department of Homeland Security to making sure staff know what to do in the event of an attack or threat. The ADL and American Jewish Committee have also worked with Muslim leaders and institutions on reporting, preventing, responding to and prosecuting hate crimes.

Muslims and Jews appear to have good reason to be vigilant. The Anti-Defamation League reported a 34 percent increase in anti-Semitic incidents in 2016 versus 2015. Islamophobic attacks went up 67 percent from 2014 to 2015, according to the latest FBI statistics, and the number of anti-Muslim hate groups has nearly tripled in the past year, according to the Southern Poverty Law Center.

Both communities have suffered high-profile hate incidents in the past few weeks. A Minnesota mosque was bombed in early August, and the recent white supremacist rally in Charlottesville targeted Jews with neo-Nazi slogans. Brandeis University, a nonsectarian Jewish school, received a bomb threat Thursday, though it’s unclear whether the threat was explicitly anti-Semitic.

Some Jewish institutions began forming security plans following the 9/11 attacks in 2001, and SCN was founded three years later. Jewish institutions nationwide have received more than 100 bomb threats in 2017, most of which came in waves early in the year. The identity of the main hoaxer in those threats, a 19-year-old Israeli-American man, wasn’t known for months, leading the institutions to beef up security, including some that hired guards or restricted entry to their buildings.

Muslims now hope to do the same for their mosques and facilities.

Salam Al-Marayati, president of the Muslim Public Affairs Council, has been consulting with Goldenberg on security since 2011, though he said that work has picked up since the presidential election in November. This year, Goldenberg provided the Los Angeles-based council with a plan to secure area mosques, including best practices on coordinating with law enforcement and procedures to follow during an emergency.

“All of that was unknown to the community, and with the help of Paul it became known,” said Al-Marayati, regarding security procedures. “That’s my goal in life: to find Paul’s counterpart in the Muslim community. He’s served that role for the lack of a security specialist.”

The ADL’s regional offices also provide local mosques with consulting similar to SCN’s — how to build relationships with law enforcement, how to monitor who enters and exits buildings, and the best ways to spread information about a threat or attack.

Over the past year, the ADL’s Houston office has held two briefings with the local Muslim community — one for schools, the other for community institutions. In addition to security best practices, the school briefing introduced administrators at the six participating schools with local law enforcement officers.

Elise Jarvis, who heads the ADL’s community security efforts, said one of the best ways to improve security would be for Muslim communities to increase reporting of hate crimes to police. Jews currently suffer the most hate crimes of any religious group in the U.S., according to the FBI, but Jarvis said Muslims may avoid reporting hate crimes due to a lack of trust in law enforcement. Al-Marayati said many Muslims resent “being treated as suspects.”

“There’s underreporting across the board,” said Jarvis, who said that if communities make sure to report incidents, “law enforcement are able to respond and identify those behind hate crimes.”

The Muslim-Jewish Advisory Council, a group of religious and communal leaders formed around the time of the presidential election by the American Jewish Committee and the Islamic Society of North America, has been pushing for stronger hate crimes legislation federally and at the local level.

Robert Silverman, U.S. director of Muslim-Jewish Relations for AJC, said the advisory council’s newly formed Dallas chapter will be examining how to oppose members of private militias who regularly stand outside synagogues and mosques brandishing their weapons — something that also happened in Charlottesville on the day of the far-right rally. The chapter hopes to advance legislation or regulations that would discourage such behavior.

Silverman said a law increasing punishments for hate crimes would deter bigots from moving from intimidation to violence. The advisory council supports federal legislation to define attacks or threats on religious communal institutions as hate crimes.

“If you go vandalize the synagogue, and instead of a misdemeanor, that will become a five-year prison sentence, that will send a strong message that people will take this more seriously,” Silverman said. “We don’t all consider ourselves victims. We’re organizing.”