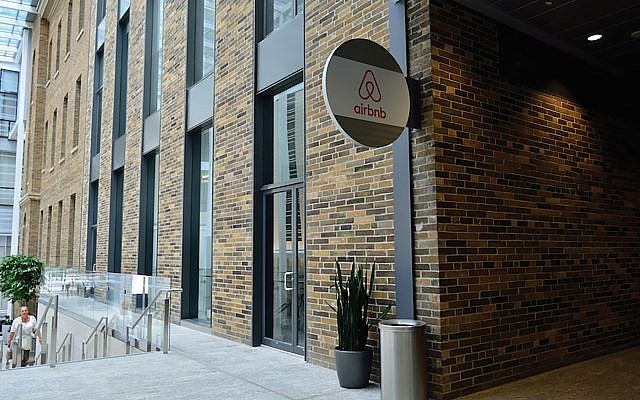 Airbnb is being accused of violating the Fair Housing Act by discriminating against Jews in the West Bank.

Samuel Silber, the founder of a ride-sharing company in Israel, said he depends “100 percent on Airbnb” for help in renting a spare room in his home, which is located in the Israeli West Bank settlement of Rechelim near Ariel.

Two weeks ago, Airbnb, the popular San Francisco-based internet hospitality company that rents homes and rooms in residential buildings worldwide, launched a boycott of all Jewish-owned vacation rental properties in the West Bank. Property in West Bank non-Israeli and non-Jewish settlements and dwellings are not affected, nor are listings from the Palestinian Authority, where Jews are barred from purchasing land on penalty of death.

“It means we will now have to use different channels and find our own people [to rent],” said Silber, 40, who moved to Israel in 1981 from Forest Hills, Queens. “We’ll be losing some very good customers. Airbnb operates all over the world. We had a couple from Holland; I don’t know how we are going to reach Holland anymore.”

Asked if his renters realized they were renting in the West Bank, Silber replied: “People come because it is the West Bank; they are interested in learning the way of life here. They want to explore the biblical aspects of Israel. They are also very interested in the cultural way of living here and how the settlers handle the political developments in the West Bank.” 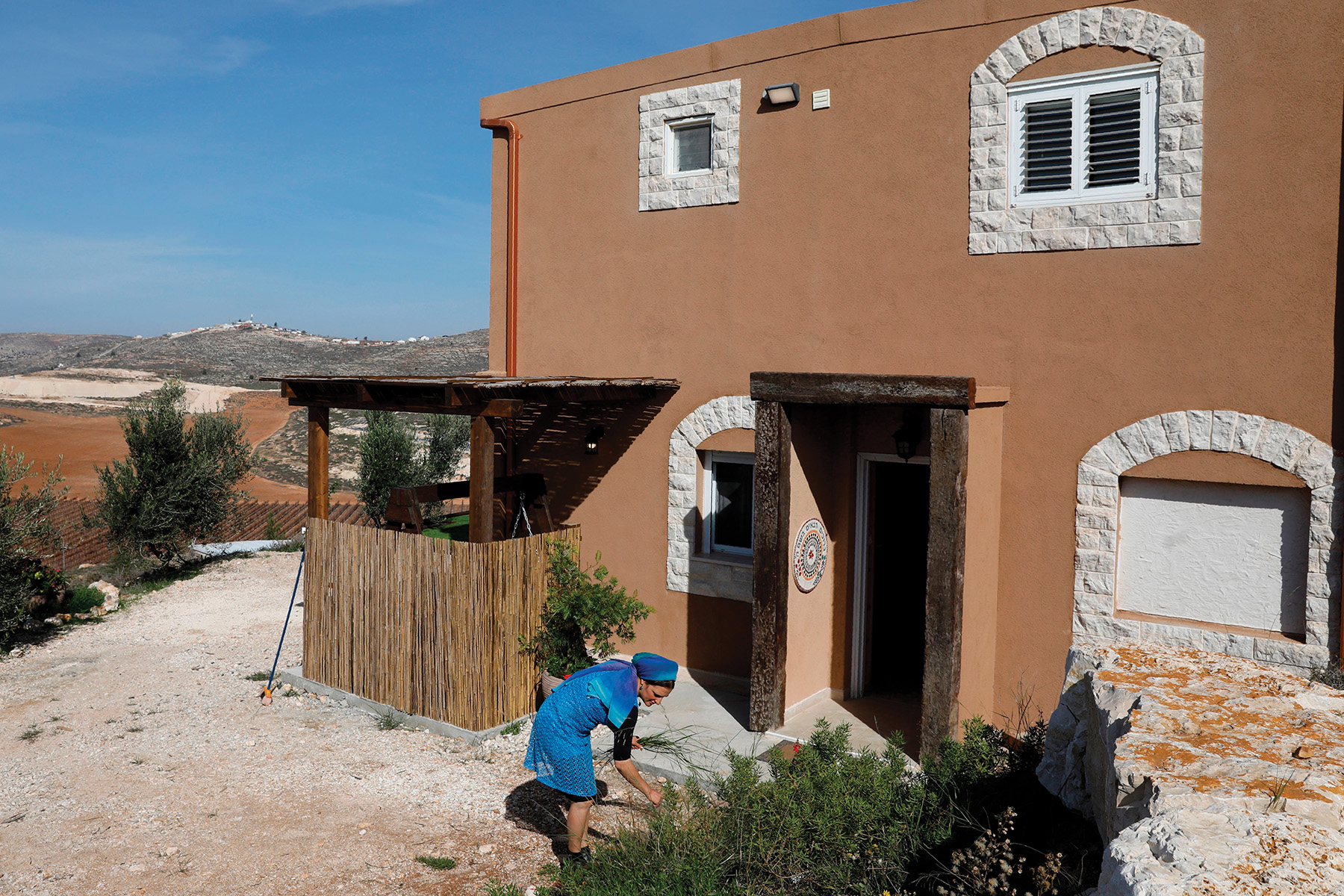 Airbnb announced recently that it is removing listings for rentals like this one in the West Bank outpost of Adei Ad near Ramallah, a move that has triggered several lawsuits. Getty Images

Silber is one of 18 plaintiffs — most of whom are Jewish-Americans who own rental property in the West Bank — who last week sued Airbnb in federal court in Delaware alleging that its boycott constitutes a violation of the Fair Housing Act, essentially an example of redlining. The suit seeks to enjoin Airbnb from continuing the boycott and asks that the plaintiffs be awarded compensatory and punitive damages to be determined during a jury trial. A similar suit, charging that Airbnb is violating Israel’s anti-boycott law, was filed in Jerusalem District Court by an Israeli woman who lives in the West Bank.

The suit notes that prior to Nov. 19, Airbnb “publicly asserted that it followed a policy of non-discrimination on the basis of race, religion, national origin, ethnicity, disability, sex, gender identity, sexual orientation, or age.” Further, the company also “rebuffed calls by the Boycott, Divestment and Sanctions Movement (the “BDS Movement”) and other anti-Israel and anti-Semitic organizations and activists to refuse to provide its platform and services to Jews and/or Israelis seeking to offer their residential dwellings for rent in the disputed territories known as the ‘West Bank.’”

But on Nov. 19, according to the suit, Airbnb abruptly announced that it was removing listings in the “occupied West Bank that are at the core of the dispute between Israelis and Palestinians.” The suit said the decision “was made in response to calls by individuals and entities aligned and affiliated with the BDS movement, which is recognized as an anti-Israel and anti-Semitic organization that targets Jews and Israelis for discrimination and exclusion from economic, academic, and cultural organizations and activity.”

Vice President Mike Pence, in an address last week to the Israel American Council in Florida, said the BDS movement “is wrong and it has no place in the free enterprise of the United States of America. … We stand with Israel because support for the Jewish state is not a partisan issue; it is an American issue.”

But Saeb Erekat, a senior Palestinian negotiator, welcomed Airbnb’s action and said he hoped it would be expanded to eastern Jerusalem, which the Palestinian Authority claims as its capital.

In a statement explaining its decision, Airbnb noted that although U.S. law permits it to operate in the West Bank, “many in the global community have stated that companies should not do business here because they believe companies should not profit on lands where people have been displaced. … Our team has wrestled with this issue and we have struggled to come up with the right approach.”

Noting that it operates in 191 countries and regions, Airbnb said it “must consider the impact we have and act responsibly.” JTA reported that Airbnb will next be looking at its 24 listings in another disputed area, Western Sahara. Nati Rom, founder of the anti-Israel boycott organization Lev Haolam, walks next to an Airbnb apartment located in an outpost near the West Bank Jewish settlement of Shiloh. Menahem Kahana/AFP/Getty Images

She told The Jewish Week that Airbnb’s decision “came from a company everybody likes and uses — the last thing on people’s minds is that this company would turn political. It’s a business. … When they single out Jews and not Muslims, Christians and Arabs in the same territory, that is a political act.”

Tolchin noted that one day before Airbnb announced its decision, Human Rights Watch issued a “one-sided report” criticizing Airbnb for supporting the occupation and saying at least 17 rentals are on privately owned Palestinian land.

“They didn’t make any honest effort to present the second side of the issue,” he said, pointing out that Palestinians who believe Israelis built homes on their land have sued to get their property back.

But Eric Goldstein, deputy director of Human Rights Watch’s Middle East and North Africa division, said his group was not viewing the West Bank as “contested” land but rather “occupied” land, similar to Northern Cyprus, Crimea and Western Sahara. He acknowledged that HRW’s call for Airbnb to delist rentals in Israeli settlements “is the first such call we have made on Airbnb anywhere in the world.” But, he insisted, HRW was not “unfairly singling out one place.”

“Human Rights Watch has an entire division dedicated to exposing businesses’ contributions to human rights abuses around the world,” he wrote in an email. “Where we find there is no way for them to adequately mitigate their contribution to an abuse, we have called on them to end the problematic operations.”

Goldstein said the “very existence” of the settlements violates international humanitarian law and that Palestinians living there “are subject to rank segregation and discrimination. To add insult to injury, Israel confiscates the land and then uses it for its own economic benefit.”

He added that Palestinians are barred from entering an Israeli settlement to stay at an Airbnb, and that the company is therefore helping “settler hosts profit from their illegal presence.”

Darshan-Leitner told The Jewish Week that HRW is wrong to say the settlements are on “occupied” land because the Oslo Accords signed by Israel and the PLO in 1993 state that Israel’s final borders will be decided by future negotiations that have not yet concluded.

“Who appointed these arrogant outsiders to prematurely decide what the parties will negotiate?” she asked in an email. “In order for the territories to be ‘occupied’ under international law they would have had to have been captured from a rightful owner.”

Darshan-Leitner noted that the land was illegally annexed by Jordan in 1950 and that Israel seized it during the Six-Day War in 1967, and that it remains contested. And, she said, “there is no state of Palestine today nor previously, nor are the settlements built on territory that belongs to it. Therefore HRW’s assertion that the settlements are on occupied rather than contested land is both historically and legally incorrect. The plain truth is that HRW is a BDS-supporting organization that cynically and discriminatorily singles out Israel for special treatment. They have no problem with Airbnb listing homes in Northern Cyprus and Western Sahara only in Ariel and Eli. Muslims and Christians can list their homes in the territories but just not Jews. Racism pure and simple.”

She added that she plans to sue Human Rights Watch in Israel as early as this week.

In a statement, J Street said it is wrong to call Airbnb’s action “anti-Semitism” because that is “abusing the term and diminishing the very real threat of rising, deadly anti-Semitism in this country and around the world.”

The Simon Wiesenthal Center urged its supporters to boycott Airbnb, and noted that the company “has no problem doing business in the territory of the Palestinian Authority, which … has a ‘pay to slay’ policy when it comes to killing Jews.”