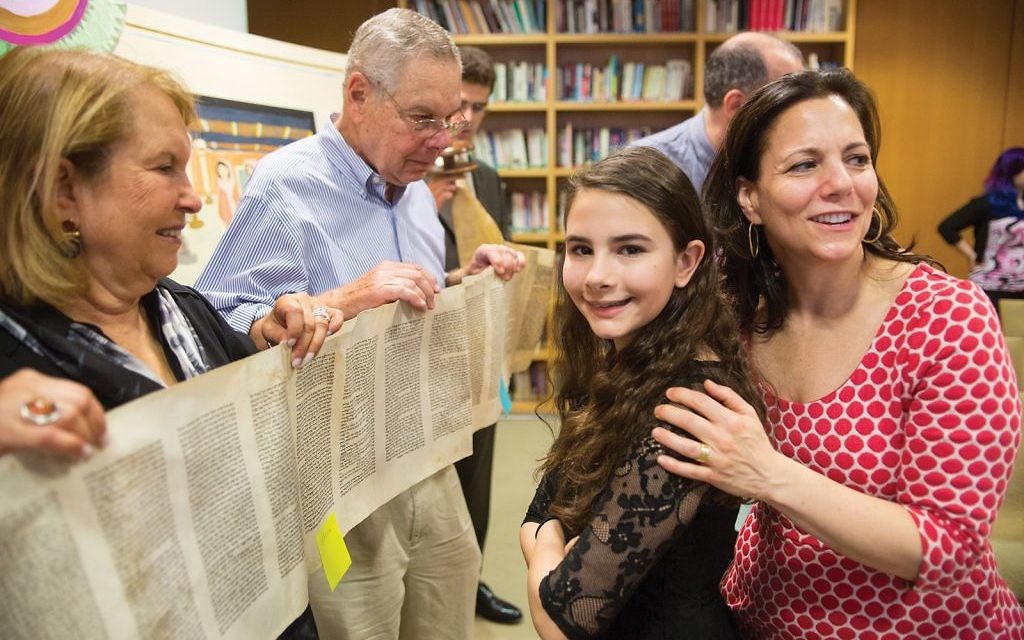 In short: not your typical Hebrew school.

In 2012, JCC Manhattan launched what might just be the most atypical Hebrew school program in New York City, and four years later, the project is going strong and expanding, offering new elements and helping Jewish institutions across the borough start programs of their own.

The concept — let kids put together an individualized path of Jewish study by selecting courses offered through a network of participating institutions — was created by Rabbi Joy Levitt, JCC Manhattan’s executive director.

“Jewish life is very creative and innovative, but very little of it was coming into the Hebrew school classroom,” she said. “I wondered: What would happen if we linked synagogues to others and the JCC and we bring content providers into a much better resourced system?”

In 2011, she outlined her plan in a concept paper and distributed it to Jewish educators across the country. “My promise was that a woven system that was collaborative would be a better system,” she said.

and courses in Jewish tradition through music, ceramics and theater. PHOTOS COURTESY OF JJP

She recruited a committee made up of staff and lay leaders from the 14th Street Y, JCC Manhattan and seven area synagogues to figure out the details. A year later, the Jewish Journey Project (JJP) launched.

Each year since, participation has hovered between 250 and 300 students, about a third of whom sign up through the JCC, while the rest do so through area synagogues. And each year the program has grown — in offerings and reputation.

“I have spoken to synagogues all over the country,” said JJP director Lori Forman-Jacobi. In Michigan, Aish Detroit has adapted the program, offering an in-house program called Sunday School 2.0 that allows children to choose one of two creative classes offered each semester. The most unique offering: learning “the story of Jerusalem” by creating it in Minecraft.

JJP is also expanding its “Hebrew Homepage” program, in which students are tutored in the language through one-on-one online sessions. The 30-minute weekly meetings use an interactive digital platform that allows a Skype-like interface combined with additional features such as screen sharing. Next year, the JCC will offer the program to Hebrew schools that are not participating in the JJP program. Rabbi Levitt said she expects the program “to scale up from 200 students to 600.”

“It’s been enormously successful; kids love it,” she said. “Kids flourish in a 1-on-1 environment. It’s a much better way to learn to read than in a classroom.”

Because the pupil and instructor meet online, logistics, such as travel time and scheduling, are streamlined, allowing the pool of potential teachers to expand exponentially. “We use college students as instructors, and that tutor could be sitting at the University of Michigan,” Rabbi Levitt said.

Another expansion is the addition two years ago of a reimagined b’nai mitzvah option.

Called Brit Atid (Covenant of the Future), the yearlong program for seventh graders includes monthly Torah study sessions for the students and their families, monthly one-on-one sessions for each student and an option to take a community service class specifically for seventh graders. Students create a project based on the Torah portions corresponding with their birthdays and present them at an end-of-the-year joint celebration.

“One of the things that we’re experiencing is that there are families that for one reason or another don’t want a traditional bar mitzvah,” Rabbi Levitt said. “They want the rite of passage but don’t want it to be part of the synagogue experience.”

At this year’s event, one student explored the tension between tradition and change. Another created a stop-motion animation film about the Exodus from Egypt. A third interviewed people from a variety of minority groups about what it’s like to be targets of prejudice.

“I’ve got to tell you it was one of the most powerful talks,” Rabbi Levitt said. “First it surprised me how competent these young people are, and when you give them the tools to express themselves through a Jewish lens, it was incredible.”

Forman-Jacobi, JJP’s director, had a similar experience at the ceremony. “You have these ideas, but you never know whether you are really accomplishing your goals,” she said. But at the ceremony, she said, it was clear that she was. “There was a qualitative difference in the way these kids owned their Jewish experience,” she said. It wasn’t just that we gave them a Jewish education, but that we gave them a pathway and they think it’s theirs.”

Andrea Rapaport’s son, Jack Fitzsimons gave the talk on prejudice. She said that for her family, JJP was a “perfect fit.”

“We weren’t really interested in joining a synagogue and we wanted them [her kids] to have the education and a community,” she said. JJP, she added, is “new and inventive and creative — we didn’t hesitate.”

Students who join the program through the six participating synagogues — Ansche Chesed, Congregation Habonim, The Shul of New York, Society for the Advancement of Judaism, B’nai Jeshurun and Beineinu — celebrate their b’nai mitzvah through their home shul. As for the earlier years, some of the synagogues send all their students to JJP for grades 4-6, others give students the option of either continuing Hebrew school at the synagogue or participating in JJP.

At The Shul of New York, the JJP program has replaced traditional Hebrew school altogether up through sixth grade.

“It’s just more innovative than any synagogue will have the energy or budget to be,” said Adam Feder, the shul’s music director and JJP coordinator, who also teaches classes in the program. “There were so many more offerings that the kids were so excited about — dance, music, ‘Running with the Torah.’ It just was a no-rainer.”

Upper West Side congregations Ansche Chesed and B’nai Jeshurun give students the choice between traditional Hebrew school and JJP. At both synagogues, the students divide roughly 50-50 between the options. Rabbi Yael Hammerman, Ansche Chesed’s director of congregational learning, said students had several reasons for sticking with the synagogue option including that it’s simpler “in terms of travel and logistics,” and that they consider the synagogue classes “‘meatier’ in terms of content,” and because it allows students to maintain a stronger relationship with their Hebrew school classmates and synagogue as a whole.

Families who opt for JJP often cite the flexibility in scheduling and choice of classes, said Ivy Schreiber, director of youth and family education at B’nai Jeshurun. “Our kids have appreciated having a choice in what they’re picking … whether that be knife skills in a cooking class or honing a particular artistic skill, while pairing that with Jewish learning,” she said.

JJP students begin by meeting with an advisor who helps them choose courses. There are once-a-week, semester-long classes as well as “intensives” during school breaks.

“It’s kind of a customized Hebrew school,” said Elizabeth Cohen, whose 9-year-old daughter, Grace, joined the program a year ago.

Syndey Minor, who completed the Brit Atid program this spring, said she liked being able to choose — and sometimes invent — her classes.

“I enjoy how you can fit it to your own personal interest. I like debating and one of the courses I took was Jewish debate,” a course that was added at her request.

“I think that I get more of a takeaway from it [than traditional Hebrew school],” she added. And she thinks she probably liked it more, too. “I’ve been hanging out with my friends and they will be saying ‘I don’t want to go to Hebrew school tomorrow.’ And I’m thinking that I will enjoy mine.”

Each organization sets its own requirements. All require their students to participate in “Hebrew Homepage,” except the JCC, where the class is optional. In addition, synagogues require their JJP students to take between two and four JJP courses a year (depending on the congregation), as well as a weekly class at their home shuls. JCC Manhattan students are encouraged to take roughly four classes a year over the four-to-five-year program.

In general, JJP students end up taking at least two classes a week. That, along with the Upper West Side location of the classes, means JJP is not a good fit for all synagogues.

Saul Kaiserman, director of lifelong learning at Temple Emanu-El said he found the quality of the JJP teaching to be “excellent,” but logistical issues caused the Upper East Side synagogue to pull out of the program.

“It’s something that brings together the best of what a synagogue can offer and the kind of flexibility that people really need,” he said. “But, at Emanu-El, because it’s a one-day-a-week program, an on-site elective [at the JCC] was actually more complicated for people to schedule because it meant finding a second day of the week that also worked for them,” he said.

Education directors from several of the participating synagogues noted with appreciation the high level of cooperation and coordination that took place in order to get such a complicated program to run smoothly.

“It’s an amazing thing. It’s really like a feat of communication,” Feder said. “Everyone has an investment in their particular institution living on. But we also have an investment in kids expressing their Jewishness in different ways. … It is a victory for people to be willing to try something new and to join forces.”