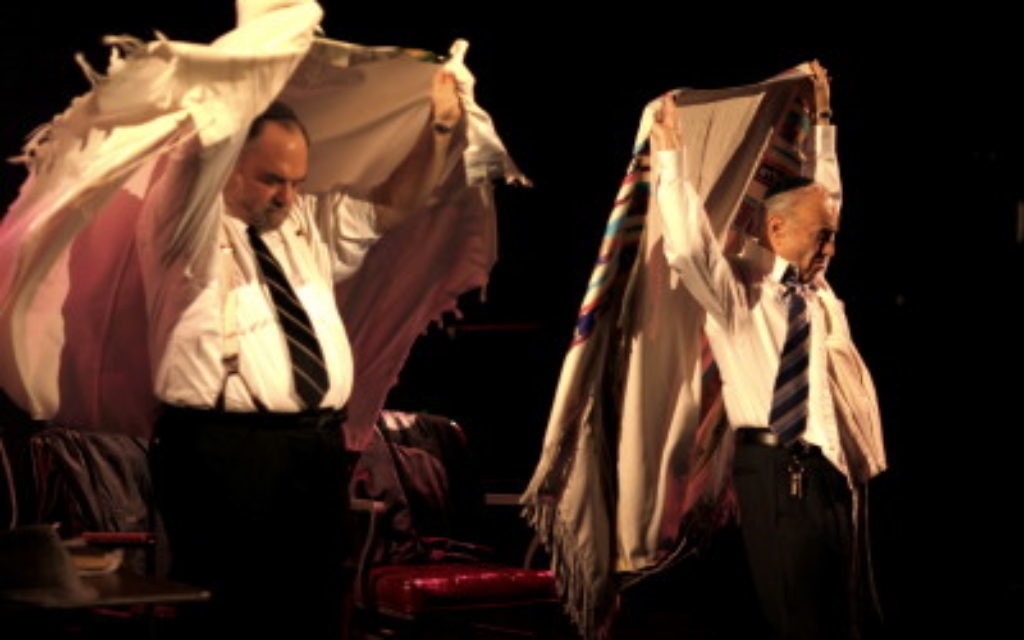 Theater and religion have overlapped since ancient Greek dramas were performed at religious festivals. For the Argentine Jewish director and playwright, Vivi Tellas, synagogue-going and theater-going are still flip sides of the same coin. In her new avant-garde play, “Rabbi Rabino,” two real-life Conservative rabbis from Queens, Hyman Levine and Moses Birnbaum, expose aspects of both their professional and personal lives. Erik Piepenburg of The New York Times Artsbeat blog called the show an “irreverent mini-variety show about Judaism and modern identity.”

Tellas, who taught last year at NYU, directs the experimental wing of the municipal theater in Buenos Aires. She specializes in documentary theater, a form that typically borrows its dialogue from interviews, trial transcripts or government records. But unlike such playwrights as Moises Kaufman, Emily Mann and Anna Deavere Smith, who use professional actors to portray historical or contemporary figures, Tellas “kidnaps reality,” as she puts it, by putting ordinary people up on stage. In prior works, she has featured her mother and aunt, three actual philosophy professors from the University of Buenos Aires, and two real-life driving instructors.

In “Rabbi Rabino,” the clerical duo, who are friends in real life, do a kind of vaudeville act that veers from the comic to the macabre and back again. They tell their best jokes, supply voiceovers for the original 1923 silent version of Cecil B. DeMille’s “Ten Commandments,” pray the evening service and confess their fears of death. In an echo of the near-sacrifice of Isaac in the Torah, Levine, whose father was a cantor and shochet (ritual slaughterer), even uses Birnbaum’s body to demonstrate how the animals were dispatched. Finally, the two rehearse a scene from Cyrano de Bergerac to demonstrate how to find a mate.

Tellas is not the only director working in this form. The controversial Swiss-German visual and performance artist Stefan Kaegi has created such “ready-made” and “actor-less” theatrical projects as “Radio Muezzin,” which used four actual Egyptian minaret callers, “Deutchland 2,” in which an entire 18-hour session of the German Bundestag was recreated by 200 citizens of Bonn, and “Call Cutta,” in which audiences in Berlin were controlled by mobile phone from a call center in India. But Tellas may be the only one to explore Jewish issues in this way.

The playwright, who grew up in a secular Jewish family, told The Jewish Week that a synagogue bears many resemblances to a theater. “Rabbis are up on a sort of stage, they use repeating texts, they have an audience and costumes,” she pointed out. In working with the rabbis, whom she called “living archives of experience and knowledge,” she “looked for theater in their lives, as well as theatrical moments in Judaism.”

Her art is, in the end, indistinguishable from philosophy. “Is God listening to your prayers,” she asks trenchantly, “if you pray while you are onstage in a play?”