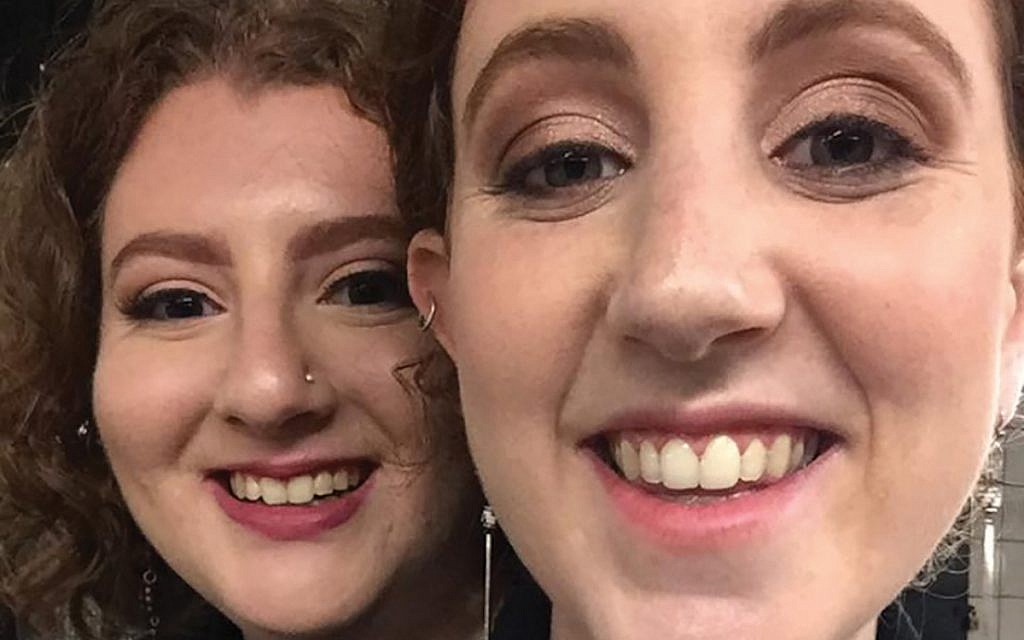 Anya Gelernt-Dunkle, left, and sister Eva Gelernt decided to raise awareness of Gaucher disease upon discovering they have the ailment. Courtesy of the Gelernt family

JTA — When Eva Gelernt was a child, she suffered from mysterious medical ailments: severebone pain in her legs and knees. Unexplained bruising. Low blood platelet counts.

Eva, now 24, visited doctor after doctor near her home in the Philadelphia suburb of Moorestown, N.J., but her problems were dismissed repeatedly as growing pains. By the time she reached high school, Eva was being tested by oncologists.

“They thought I had cancer,” she said.

The tests, however, never showed any malignancy.

It was only in 2014, when older sister Anya was engaged to be married, that Eva found an answer. Anya underwent genetic testing before her wedding in anticipation of having a family someday, and she tested positive for Gaucher disease. When her genetic counselor described the symptoms, it described her sister’s problems.

Gaucher disease (pronounced go-SHAY) is an inherited lipid storage disorder caused by genetic mutations common among Ashkenazi Jews. It’s a recessive disease that parents pass on to their children when both carry a mutation.

Anya and Eva suffer from the mildest form of Gaucher, Type 1, which comprises 95 percent of cases in Western countries. While Anya is asymptomatic, Eva suffers from the disease.

Those afflicted with Gaucher don’t have enough of the enzyme glucocerebrosidase, which breaks down a fatty chemical in the body. As a consequence, they may suffer damage to internal organs and bones. The more serious types of Gaucher, 2 and 3, cause cognitive problems, seizures and other disorders, and can lead to early death.

Doctors found that Eva’s spleen and liver were grossly enlarged and she had experienced some deterioration of her bone marrow. She is being treated with a new oral medication to mitigate her symptoms, Cedelga, and she works with a Gaucher specialist to monitor her condition with an annual MRI.

After their discovery four years ago, the sisters decided to raise awareness of Gaucher, which often goes undiagnosed even though it can be identified by a simple blood test. The pair recently became part of a team of “ambassadors” of the National Gaucher Foundation to spread knowledge of the disease.

“Far too many people have gone undiagnosed for far too long,” said Eva, a poised young woman with an expressive face and a cloud of auburn hair.

‘Knowledge Can Be Power’

Raising awareness of Gaucher isn’t important just for those who may suffer undiagnosed symptoms. It’s also important to spur couples of childbearing age to undergo genetic testing, so if they are carriers of Gaucher — or any other kind of genetic disease — they can plan appropriately.

The National Gaucher Foundation recently released a short film designed to spread awareness about the importance of genetic testing. In the dramatic comedy “One of Those Dates,” Gaucher disease is brought to the forefront of the conversation — on a first date.

For the past two years, the foundation has partnered with JScreen, a nonprofit that offers Jews subsidized genetic screening for more than 200 diseases through home-order screening kits. More than 1,580 people have been screened through the partnership, and 86 were identified as being carriers of Gaucher. Three had the disease itself.

“That’s pretty astounding when you think that this is a rare disease,” said Amy Blum, chief operating officer of the National Gaucher Foundation.

Despite its overall rarity, Gaucher is the most common genetic disease among Ashkenazi Jews, according to the foundation. One in 450 Ashkenazi Jews has the disease and as many as 1-in-10 may be carriers. By comparison, 1 in 24 carry the gene for cystic fibrosis and 1-in-27 the mutation for Tay-Sachs.

Gaucher often is difficult to spot because its symptoms can mimic those of many diseases and doctors aren’t necessarily trained to spot it.

“Doctors are trained to think of the more common diseases like leukemia or lymphoma — that’s what they test for,” Blum said. “The average diagnostic journey from symptoms to accurate diagnosis could be five to eight years. That’s five to eight years of people suffering.”

Before scientists developed therapies for Gaucher, those with the disease were very sick. Today, however, with proper expert physician care and treatment, it can be as manageable as diabetes.

“They can lead very healthy lives,” Blum said. “Knowledge can be power.”

Among the five FDA-approved treatments for the disease are enzyme replacement therapy, which requires periodic intravenous infusions, and the drug that Eva takes — a substrate reduction therapy that reduces the amount of lipid in her system.

To educate health care providers and the public, the National Gaucher Foundation provides continuing medical education for practitioners and hosts an annual meeting that brings together experts and patients. The foundation also connects patients and parents to confidential health resources and seeks to ensure that patients have access to Gaucher specialists.

In addition, there is financial help available for those who qualify.

Over time, Eva has learned to live with Gaucher. A graduate of Barnard College in New York City, she works as the clinical research coordinator at the multiple sclerosis center at Columbia University Medical Center and is applying to graduate programs to become a nurse practitioner.

Having to monitor her disease through annual MRIs makes her appreciate what MS patients go through, Eva said.

“I can relate to them in some way and make them more comfortable,” she said.

Anya, who lives in Boston, doesn’t feel symptoms other than the occasional bone twinge. But she keeps an eye on her health because Gaucher symptoms can appear at any time — in particular during pregnancy.

Because her husband does not possess any gene mutations for Gaucher, their children won’t have the disease, though they still can be carriers.

The experience has made Anya a huge booster of genetic testing.

“I told all my friends who got engaged: Do this now, so you don’t have to worry about it if everything is fine,” she said. “It’s so easy.”

This article was sponsored by and produced in partnership with the National Gaucher Foundation (NGF, gaucherdisease.org), an independent nonprofit dedicated to serving U.S. patients with Gaucher disease and their families. Through financial support, educational programming, patient services and collaboration with medical professionals, NGF empowers Gaucher patients to live a better today. This story was produced by JTA’s native content team.