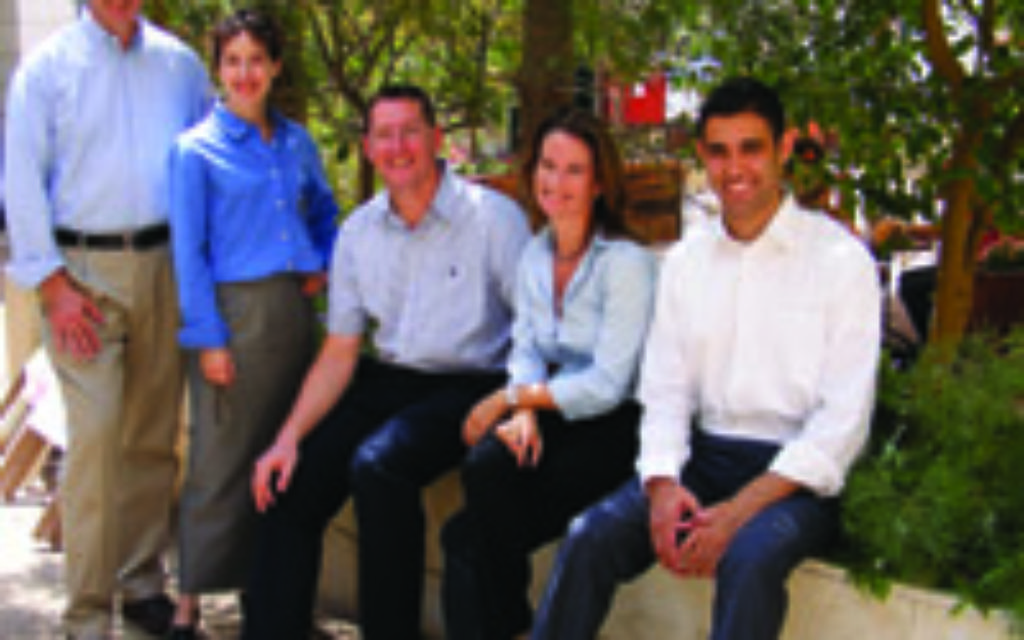 Two years ago, Gil Margulis was in a completely different place, emotionally and geographically. His New York life was losing its fizz, especially after the financial crisis killed his company. His solution: immigration. As a citizen of the start-up nation, he would rejuvenate his career by plugging into Israel’s robust economy. Also, he was sick of being single.

“Economies elsewhere are sputtering, and Israel is booming. You feel that dynamism, you feel that energy. It’s happening,” said Margulis, 42, who is starting what he calls a mobile content company.

While protesters frustrated with Israel’s high cost of living and widening wage gap have covered the land this summer, outside the tent cities hardheaded newcomers are hustling in a country that has become a latter-day land of opportunity. Even their recent predecessors placed more emphasis on homeland and religion as a reason for making the move to Israel, said Chaim Waxman, a Rutgers University professor emeritus of sociology and Jewish studies who conducts research on aliyah. This new breed of elite olim loves Zion, and their careers, too.

In 2010, nearly 4,000 North Americans made aliyah, more than any year since 1973, said Jewish Agency spokesman Barry Spielman. He sees the increasing prominence of economic motivations, especially in the higher numbers of young immigrants. Between 2006 and 2011, the number of olim aged 20 to 39 has grown a percentage point each year, to 42 percent from 38 percent. Aliyah is also on the rise from Western Europe. “It [aliyah] is definitely alluring, and it lures people who are looking for opportunity,” Spielman said.

It’s a kind of reverse diaspora, small but significant, like the one India is experiencing as its booming economy draws expatriates home. Israel offers similar attractions, especially to ambitious North Americans or Europeans aiming at careers in or around the influential tech sector glorified by Dan Senor and Saul Singer’s 2009 book “Start-Up Nation.”

“Aliyah can be a career move, a smart way of getting ahead,” said Pinchas Landau, an independent economist based in Israel who is studying French aliyah. “There’s been a move from idealism and ideology to pragmatism and a more practical approach.”

Of course, tech in particular is sexy — and lucrative.

“You see people having meetings in cafés all hours of the day and all hours of the night, talking about their partnerships, creating businesses, expanding business,” said Rachel Brender. Her plans to start a business in New Jersey failed after she graduated from Oberlin College in 2009. Now she co-owns TasteTLV.com, a Tel Aviv restaurant review site. What’s more, promotions and raises flow faster in Israel’s freewheeling entrepreneurial culture than they do back in the States, Brender said.

“It is possible to make it in Israel, and even to be rich in Israel,” said Mickael Bensadoun, executive director of Gvahim, a support organization that helps highly educated immigrants find jobs on a professional par with those they are leaving behind.

To understand Israel’s visceral appeal to the young and ambitious, look first at the job market, Landau said. Unemployment in Israel is 5.5 percent, in essence, the lowest it’s ever been, Landau said. In the United States, it has long hovered at around 9.1 percent.

“The old romantic aliyah is over,” said Elliot Lazarus, 31, a married architect with two children who lost his job in New York and took a better one in Jerusalem. “The U.S. is not the dream place that it used to be. It makes the decision to start something new that much easier.”

The United States and other Western economies continue to stumble even though the Great Recession is ostensibly over, but it has hardly nicked Israel. Investment is pouring into Israeli high-tech industry in ever-increasing amounts: about $1 billion in the first half of 2011, up 82 percent from the year before, according to the Israel Venture Capital Research Center.

Esther Loewy, who founded and now runs Bootcamp Ventures, a consultancy that connects new companies to investors, helps raise that money. So for her, it was the wealth of opportunities in Israel — not a lack of them at home — that inspired her to immigrate way back in 2005 despite the strength of the U.S. economy at the time.

“People would ask me, ‘Why, why would you leave New York?’” said Loewy. “I wasn’t running away from anything.”

She has a husband and two children. But today, soft economies in North America and Europe are making Israel all the more tempting even to mid-career professionals and families despite the very real problems that gave rise to the social protest movement and its tent cities. This elite cohort of olim is in a different position, Margulis said.

Lazarus, for example, first found work in Israel when Masa, the Israeli nonprofit that administers and supports work and study programs, guided him to an internship program at a Jerusalem architecture firm. Internships, as opposed to a stint in a yeshiva or a post-high school gap year, are Masa’s fastest-growing programs in part because they draw on a deep pool of applicants who are unimpressed by their professional prospects at home, said Avi Rubel, Masa’s director of North American operations. To sharpen its already robust appeal among ambitious, restless twenty-somethings, Masa is rebranding its entire slate of internship offerings under the tagline: “Live the start-up nation.”

Lazarus and his wife assumed they would simply wait out the weak U.S. economy and leave Israel when his program ended. Then a plum position presented itself there, while at home the outlook darkened. What’s more, as a religiously observant family, they were open to aliyah.

“Every Shabbat morning I go to the Kotel and remember where I am,” Lazarus said.

Of course, such a major decision as immigration is rarely driven by one factor alone, said Bensadoun. If economic growth was all olim wanted, Brazil would do as well. Loewy, for example, was raised in an observant home and first made aliyah about 20 years ago. But she’ll call herself a capitalist more readily than a Zionist and wouldn’t have sacrificed her career to come back.

Even Giuseppe Calo, 34, an Italian who immigrated in March because he wanted to make a career switch, said the 2010 challenge to Israel’s naval blockade of Gaza made him more determined to do so.

Most olim need at least a smidgen of ideological zeal, Bensadoun said. It stiffens the spine when the price of cottage cheese, or housing, goes soaring, or when questions of national security and personal safety loom.

“Just because the Israeli economy is doing well doesn’t mean that you as an oleh are doing well,” said the Jewish Agency’s Spielman.

Even the most highly qualified don’t usually waltz off the plane and into a great job, and inadequate Hebrew can handicap an otherwise ideal immigrant job candidate, he said.

After all, competition for those coveted tech jobs is cutthroat, said Orit Mendelson-Shoham, who directs executive MBA programs popular with international students at the Recanati Graduate School of Business Administration in Tel Aviv.

Also, most non-tech Israeli jobs fetch lower salaries than those abroad, while costs — except for Jewish education — are higher, said Waxman.
Lazarus acknowledges the challenges: he is only making a quarter of the salary he’d earn in a healthy U.S. economy. But he says middle-class striving would be no less stressful at home, especially in the expensive metropolitan areas like New York that tend to send Israel most of its economically motivated, highly educated olim.

“Where’s a nice place to raise my kids?” he asked, pointing out that in Israel he enjoys socialized health care and a solid public education system. “Are there good schools? Why not struggle in the Jewish homeland rather than struggle in New York?”

Lazarus did have a helping hand, of course, in Masa, which smoothed his way in. Like him, many recent olim have benefited from the expansion over the past decade of a network of programs and organizations that exist to assist immigrants or, like Masa, have that effect.

Masa was founded in 2003. Between 2006-07 and 2009-10, the most recent year for which numbers are available, the internship program that channels participants into the Israeli workforce tripled in size to 1,546 placements.

Likewise, the Raphael Recanati International School at IDC Herzliya, where students can earn Israeli undergraduate and graduate degrees in English, has grown from 20 overseas students in 2002 to 1,250, said Jonathan Davis, who heads the school. Such growth is spurring the creation of similar programs, including one at Bar Ilan University, said Opher Offen, who directs the Israel Student Authority, which assists and funds immigrant students.

Nefesh B’Nefesh, which was founded in 2002 and officially took over the job of supporting North American immigration from the Jewish Agency in 2008, has significantly boosted the aliyah retention rate, and many immigrants said Gvahim, the support organization for immigrants, was key to the success of their job hunt.

Then there’s the panoply of government programs. Margulis and his brother are hatching their mobile content venture in a government incubator.

Calo, the Italian, and a friend are also launching a business, although for competitive reasons he won’t say more about it. Starting something up is easier in Israel where government actively supports, but does not interfere in, the efforts of entrepreneurs, Calo said, echoing themes explored in Senor and Singer’s book.

“In Israel, people think there’s opportunity under any rock,” Calo said, adding that he feels especially liberated by the lack of stigma should a venture fail.
The Israeli workplace is also increasingly appealing to olim because it values them more, said Margulis, who like Loewy first attempted aliyah half a lifetime ago.

“Israelis used to say, ‘Oh, you can’t tell me anything, you haven’t been in the army, you’re not from here,’” Margulis recalled. “Now they realize we have something to offer.”

That’s because the exigencies of an export-oriented economy have awakened Israeli employers to the value of immigrants’ understanding of and ability to communicate with the world outside Israel, said Karin Kaufman, director of career development at IDC Herzliya.

Last year, for the first time, potential employers asked her to set up job fairs specifically for international students, Kaufman said: “Olim close the gap between Israel and the rest of the world.”

Of course, from Israel’s perspective, these aliyah numbers are still quite small, Landau said. On a macroeconomic level, even an aliyah of 40,000, much less 4,000, doesn’t move the needle much.

The significance of the economic olim lies in quality, not quantity, Landau said. “What’s nice about these people is that they are educated,” he said. “They have a great potential to give. But let’s not get carried away.”

Still, economically motivated immigrants’ high levels of education and training, combined with the increasingly effective support network they are finding in Israel, also signals the potential for a new sustainability among these desirable immigrants unlike, say, the younger Esther Loewy who, she says now, “didn’t do her homework” when she first attempted aliyah.

The question, Landau points out, is how Israel, now that is has joined the marketplace of nations, will fare in attracting immigrants should its economy lose its luster. The very fact that Israel is competing with other countries for immigrants on the strength of its economy more than any ideology reflects a larger shift in international and Israeli perception, Waxman said.

“Israel has become normalized,” Waxman said. “It doesn’t live off its founding myths any longer.”

“I have a really nice girlfriend,” he said. “It’s looking good. It’s a bit on the early side, but hopefully this is the one.”