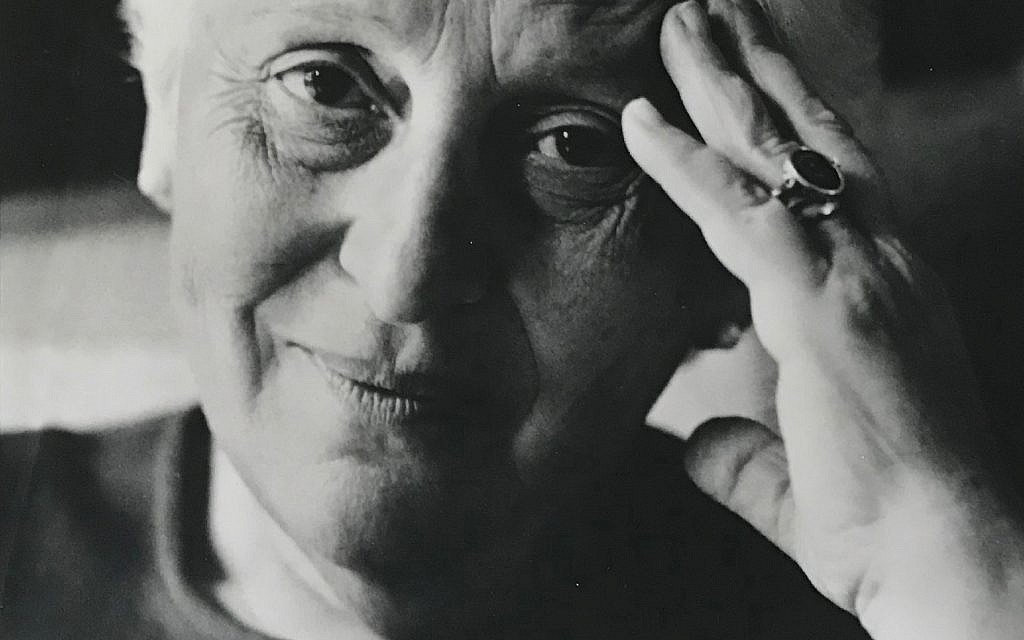 The cover of Alice Shalvi's “Never A Native.” Courtesy of Halban Publishers.

For decades, Alice Shalvi has negotiated, nudged, advocated, marched and pioneered on behalf of social justice in Israel and in doing so inspired generations of Israelis. Now 92, the Israel Prize laureate, feminist leader, progressive educator, peace activist and visionary looks back with clarity and candor in “Never A Native” (Halban Publishers).

Born in Germany, Shalvi grew up in England and fulfilled her dream of moving to Israel in 1949. She became a founder and chair of the Israel Women’s Network (IWN), principal of a groundbreaking religious girls’ high school in Jerusalem, a Shakespeare scholar who headed the English literature departments at the Hebrew University and the University of the Negev (now Ben-Gurion University), rector of the Schechter Institute of Jewish Studies — and did many of these things simultaneously. Shalvi is remarkable for her high energy, most gracious manner, deep-seated morality, articulate speech, determination, resilience and passion, all of which enabled her to advance those causes she cares most about in significant ways. Her accomplishments resonate to this day.

Earlier this month, The Jewish Week met up with Shalvi in the living room of her home, where countless organizational meetings and strategy sessions have taken place. Shalvi lives in Beit HaKerem, a leafy section of Jerusalem where there’s an easy coexistence between secular and observant. The neighborhood was founded in 1922, as one of six garden areas in the city — the vast undeveloped areas that separated them are now filled in by buildings. Shalvi’s house opens into her family’s garden, where we sat when I first visited with her more than 30 years ago. Her British accent is intact.

These days, though, it can be tough to maintain her innate optimism. When asked if this is still the Israel of her dreams, her face turns from its usual smile and she says, “How can it be? It’s a nightmare. The early years were wonderful. The Six-Day War was really the turning point. [Yeshayahu] Leibowitz was right. We should have given it all back. We should never have become an occupational government.”

She continues, “I don’t question for a moment our right to be here. But do we need all these ‘holy places?’ We lived very well without them until 1967, and then this crazy mingling of religiosity and land, which I find very disturbing, very unsettling, and I think, really, not very Jewish.”

“I think the real tragedy is how close we came with the Oslo Accords. That villain Yigal Amir killed not only Yitzchak Rabin, but he killed peace. Since then, it has been downhill all the way. And the recent legislation [the nation-state law]. What for? Why demote the Arabic language? Why humiliate people? I’m very upset by what’s happening now.”

In the book, she recounts attending a meeting of women in Brussels in 1989, with Israeli and Palestinian delegations and members of their respective diasporas, including Bella Abzug on the Israeli side. The proceedings began with much rancor and mutual accusations.

She explains, “The breakthrough was when one Palestinian reprimanded another for dismissing the Holocaust, saying ‘You have to recognize the pain of Jewish history. They need a homeland of their own, just as we need a homeland. It is their need that should make them aware of our need.’ From that moment on, everything changed.”

The women came to agreement over a document drafted by Naomi Chazan and Hanan Ashrawi, with each side recognizing the right of the other side to a sovereign state within the land of Palestine. The organizers planned a press conference, but one Israeli participant, a member of Knesset and Rabin’s cabinet, could not sign without official permission. The group dispersed with no announcement; Shalvi laments how close they were to an historic moment.

Shalvi’s life is one of many chapters, and her fine memoir captures all of them, with a telling eye for detail. The title reflects her sense that as much as she feels totally at home in Israel, she is still an outsider, an immigrant, “not a native. It’s really true of all my life,” she says. “In Germany we were ostjuden [Jews of East European origin], in England I was a little refugee girl and here I’m an Anglo-Saxon. The irony of it!” While she’s fluent in Hebrew, she says, “Most of my thinking is in English, my profession has been in English, my cultural context is English. It’s more likely that something will come to me from Shakespeare than from the Bible.” 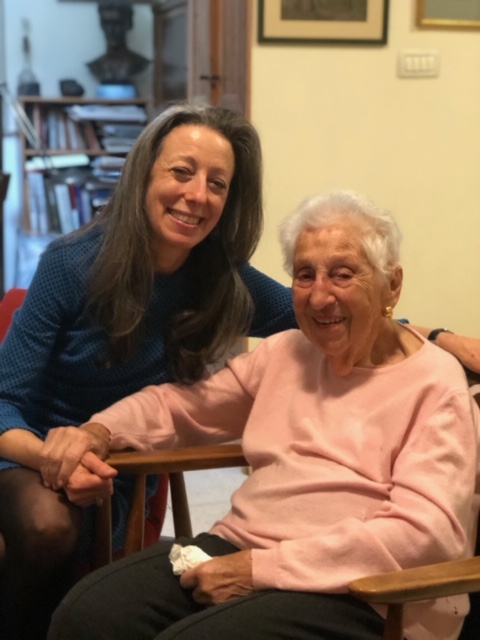 More than 20 years ago, she started writing the book while a fellow of the Rockefeller Foundation Centre in Bellagio, Italy, and put it aside many times for her various involvements, returning to it in 2014, after a year of mourning for her late husband, Moshe Shalvi — they had a long and happy marriage of 63 years. She begins the memoir with her parents, Benzion and Perl Margulies, who were cousins, contrasting her father’s self-assurance with her mother’s hesitancy; he was a person of optimism and idealism, and she was a pessimist and a woman of great charity and hospitality. Her father’s sisters never forgave Benzion for marrying someone less elegant and wealthy than they were, and Perl had a Cinderella-like life with her extended family in Manheim, until she and Benzion moved to Essen, where Alice was born. Theirs was a cultured home, and Benzion was a prominent Zionist. Soon after the Gestapo searched their home in 1933, Benzion left for England and was able to send for the family 11 months later.

During the war years, the family moved several times and Alice attended different British schools, always excelling, even as she was different from the others. Early on, she developed a passion for books — she taught herself to read at age 4 — and a desire to write them. After the war, the family prospered and had a car and chauffeur, and good seats at the opera. Alice graduated from Newnham College, one of two women’s colleges at Cambridge University, and was president of the Jewish Society, where she made history as the first woman to lead the singing at the Shabbat meal. She went on to the London School of Economics to study social work. After moving to Jerusalem, she met her American-born husband, also from a Modern Orthodox background, and they had six children, which had been her dream.

When she couldn’t find work as a social worker — she didn’t have language skills to work with the many new immigrants — she started teaching English at Hebrew University, the beginning of her distinguished career there. Fast forward, and she’s leading women faculty members to fight for equal rights, organizing woman to lobby in the Knesset, confronting the chief rabbis about the agunah issue, meeting with Palestinian educators, introducing educational innovations at Pelech High School. When the book turns from autobiography to an emphasis on her professional life, it’s as though a volcano erupts, her time and energy spilling over into many areas of concern.

She writes with painful honesty, admitting her shortcomings as a mother, as she was busy with so public and professional activities, and about personal events of her life she hasn’t shared before. And she writes of the disappointments of losing her bid to become dean of the University of the Negev, having to step down from her position at Pelech because of her left-wing views, and being ousted several years ago from the leadership of IWN. But now, she is pleased that both Pelech and the IWN have new leadership, with the school led by two of her students, and the IWN again lobbying in the Knesset.

What’s also remarkable about Shalvi is her ability to change and embrace new ideas. She speaks of the need to separate state and religion. “You see, it’s not religion and state, it’s religion and politics” — with religious issues used as blackmail by religious parties. She’d like to see “total freedom of religion,” with civil marriage and civil divorce. And she’d go further, “I want to reform all of the halacha, to abolish all inequities between men and women, in ritual, marriage divorce, orientation, in everything. In religion there’s no place for gender discrimination.”

“There’s a very good Jewish principle,” she says, quoting the Ethics of the Fathers, “Make for yourself a rabbi. You choose a rabbinic authority.”

These days, she remains religious, but no longer Orthodox in orientation. She is a member of Kehilat Zion in Jerusalem and speaks with adoring respect of Rabbi Tamar Elad-Applebaum, who had been her student at Pelech.

But she has trouble with traditional prayer, as the gendered language is no longer meaningful. “How do I refer to this divine spirit?” she asks. “I do believe in that spirit, I don’t worship that spirit. It inspires me, it fills my soul, it gives me great contentment.” She adds, “It can’t be summed up in terms of king, or father, or lord. I find the idea of using the feminine no less unsatisfactory.” She explains that she finds contentment in a daily practice of meditation and admits, “on the other hand I still say the Shema every night. I can’t go to sleep otherwise.”

These days, Shalvi moves more slowly and now shares her home with a daughter and her family. Widely admired, she remains vigorously engaged with life, still thriving on challenges and still imagining a better future.

On Tuesday, Dec. 18 at 7 p.m., Alice Shalvi will be conversation with civil rights lawyer Kathleen Peratis, at an event sponsored by the JCC of Manhattan, in partnership with the New Israel Fund, Lilith, Congregation B’nai Jeshurun and National Council of Jewish Women. It takes place at B’nai Jeshurun, 257 W. 88th St. The conversation will be followed by a reception and book signing. Cost is $15 ($10 for JCC and BJ members). Tickets here.