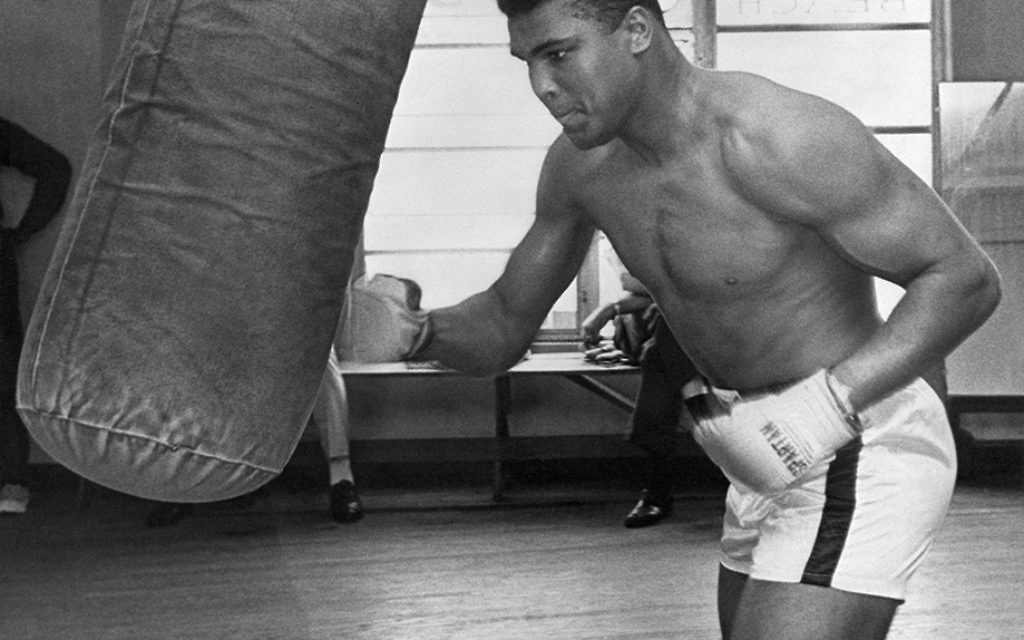 Note: The following is an excerpt from Thane Rosenbaum’s most recent novel, “How Sweet It Is!” (Mandel Pillar Press), which will be out in paperback in the fall. The novel is set in Miami Beach in 1972, featuring a host of historical characters who all happened to be in the city during that year, one of whom was Muhammad Ali, who died last week at 74. What Ali, a recently converted Muslim who was outspoken in support of the Palestinian cause, was doing in Miami Beach, living among the Holocaust survivors and Jewish transplants from the Northeast, is a novel all on its own. Actually, the mere thought of Ali in this exotic Jewish habitat is stranger than fiction, which Rosenbaum maximizes to full comic effect. In this excerpt, Ali is befriended by an irreverent local rabbi who is as unorthodox as the always-clowning, loud-mouthed boxer himself.

Angelo Dundee, the legendary boxing trainer, often barked at the ex-champ, Muhammad Ali, who had only recently returned to the ring after losing his belt not to a fighter but to the United States draft board. If he could fight heavyweights for large purses, surely he could fight the Viet Cong for America. His refusal to do the latter resulted in him being stripped of his world championship belt. Ali never claimed to be an American patriot; he was a gladiator and mercenary — but the government took away his title anyway.

“Keep moving, Muhammad, keep moving,” Dundee said from the corner of the ring. He was crouched down, forming his own cocoon as if it were he who was trying to avoid getting hit and not his famous fighter. “Let me see you rope-a-dope. That’s it, now float like a butterfly, yes … then sting like a bee.”

Dundee’s 5th Street Gym looked like hell and smelled like, well, a gym — with socks and underwear that could nearly stand by themselves so pungent was the unsavory, unwashed admixture of sweat and salt.

Nearly everything Rabbi Vered did was not by the book. And he set the worst possible example for his or any other flock to follow. Jewish Hell’s Angels would have roared right through Miami Beach and bypassed Temple Beth Am rather than pay Vered a visit. After all, when the time finally comes when a Jew needs to see a rabbi, you can’t settle for a clown.

Even the rabbi’s associations were inappropriate. He palled around with Muhammad Ali, who, just a year earlier, had been defeated by Heavyweight Boxing Champion Joe Frazier at Madison Square Garden in what many had called “The Fight of the Century.” In 1964, Ali, then known as Cassius Clay, became the Heavyweight Champion by knocking out Sonny Liston in Miami Beach, of all places. Several years later he was stripped of his title for refusing to serve in the military during the Vietnam War. The 1971 fight against Frazier was supposed to have been Ali’s redemption. It was not to be. Ali spent 1972 training in Miami Beach, waiting for a rematch so he could reclaim his title. And when not sparring, he was out on the town with Rabbi Sheldon Vered.

As a show of support, the rabbi always sat ringside at Ali’s title matches, blonde bombshells on both arms, and both hands clutching whisky at the ready.

“Muhammad, break his face!” the rabbi shouted from his seat, and then kissed the face of the starlet to his right. “Make it so he won’t walk again! Make him go bye bye!” The rabbi then threw a French kiss to his left.

Ali was a regular on Miami Beach in the sixties and seventies — the only black man with any presence on the island. He wielded the kind of clout that allowed him to hang around at night on the strip — not as a waiter or busboy, but as a VIP patron. Nearly all the other people with dark skin made an end-of-the-day exodus from Miami Beach, leaving the nightlife largely segregated.

Ali’s longtime trainer, Angelo Dundee, maintained his gym on 5th Street and Washington Avenue. One of the true special attractions that Miami Beach offered in those days was free access to Ali’s workouts. Just one flight up from the street and the smells of men in various stages of punching something, or skipping rope, greeted visitors like a right hook. When Ali was in town, the crowds swelled inside the gym like the Atlantic Ocean on a choppy day. Ali sparred with chumps whom he ate alive like chum, working the speed bag, pounding away at the heavy bag with Angelo leaning in from the other side, like he was hiding behind a tree. A cigar was clenched in his mouth as he barked out words of encouragement. Sometimes Ali took his workouts on the road, where he alternated between running in full sweats on the beach at daybreak, and circling the ball fields of Miami Beach Senior High School in the scorching, ungodly August heat.

What a bronzed rabbi was doing carousing with Ali, a Muslim and a patron of the Nation of Islam, no one could quite understand. The friendship seemed bizarre — even for Sheldon Vered. It would have been bad enough had Ali still been Cassius Clay, but the rabbi was consorting with an associate of Malcolm X, who, like Vered, was another wayward religious figure — the former Detroit Red openly preached white racism and anti-Semitism. And Ali was a vocal supporter of the Palestinian cause for self-determination, which in those days was akin to believing that the world was flat or that cigarettes were good for your health.

“Take a picture of my rabbi and me!” Ali motioned to the paparazzi with his fully-staged bellicose banter. “People think I don’t like Jews, but that’s not true. Look at us here. Aren’t we pretty?”

It could not be denied that Ali and Vered made for a very handsome pair — odd and inexplicable as the friendship certainly was. Vered stood tall with his sinewy and debonair James Bond looks and unnaturally white and wide smile. And there was Ali, still smooth faced despite the untold number of punches it had received, with an arm draped over the rabbi’s shoulder, and a mocking fist pointed at Sheldon Vered’s jaw. Ali’s body was muscled and his black skin was aglow in the pop of each flashbulb, lighting up his self-possessed brashness, as if he needed any assistance.

“They say that Gleason is the Great One, but everyone on Miami Beach knows that I’m the Greatest!”

“He’s the Greatest!” Rabbi Vered nodded wildly in confirmation, as if bestowing a blessing on his budding anti-Semite of a friend.

Thane Rosenbaum directs the Forum on Law, Culture & Society at NYU and is the author of “Second Hand Smoke” and “The Golems of Gotham,” among other novels.