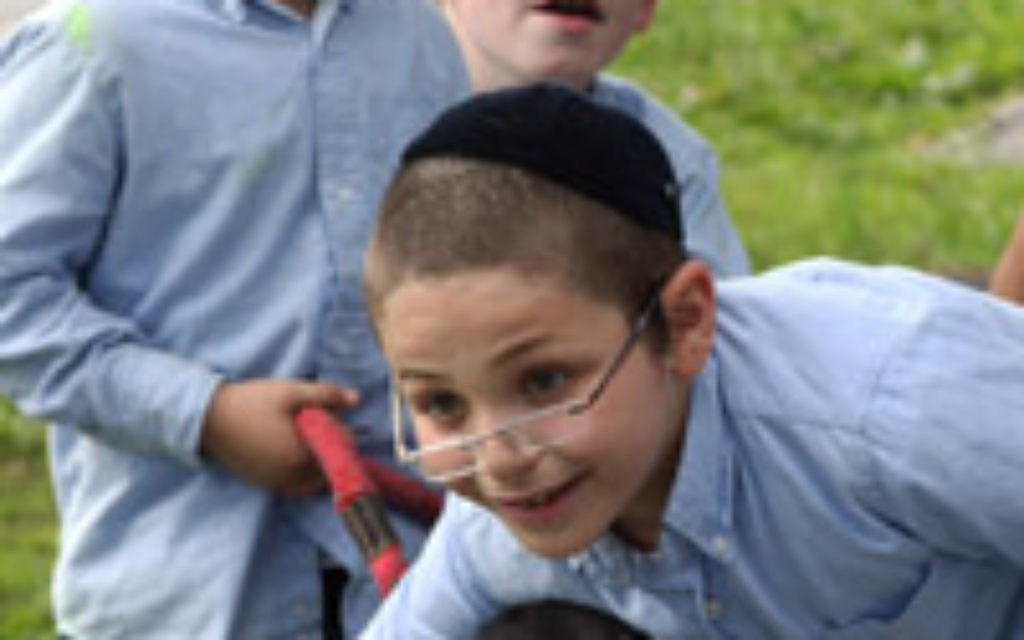 A typical day for Harvey the dog begins when he steps outside his Eastern Parkway home for his morning walk with his owner, Dale Kaplan.

The two may vary their route, ambling down Crown Heights’ main drag, Kingston Avenue, detouring to a side street or taking the longer stroll to Brower Park. But wherever they go, droves of chasidic children appear.

On their way to their various yeshivas, the kids stop to take a moment for Harvey, who also answers to “Heshey,” “Heshele” and “Cha-Chi.” They will coo to him, shout to him or eagerly or hesitatingly pet him. A few will kiss him, full on Harvey’s dog lips.

Harvey and Kaplan pause to accept the tributes, Kaplan going slack on the leash, Harvey simply standing in place or stretching out comfortably on the sidewalk. If his small human friends are particularly rambunctious, Harvey will get obligingly frisky — barking, jumping on the kids’ shoulders, even wrestling with the spryer boys.

The scene repeats on the afternoon walk, when the Lubavitcher children are on their way home from school. The results are the same — the shouting, the stroking, the occasional smooching, as well as, frequently, the mom chiding, “Very nice. Now go home and wash your hands.”

The scenes are beguiling, as kid-loves-dog encounters always are. But then the spectator senses something more, a little different. Harvey’s admirers, at least compared to kids in other city settings, seem a little too plentiful, a little too avid. It’s as if they’ve never touched a dog before, which in fact many, if not most of them, haven’t.

“He’s the only dog on Kingston Avenue,” Kaplan relates, “He’s a big fish in a small pond. People respond to him with either love or terror.”

But, she adds, Harvey is truly one of a kind.

He has even become the guest of honor at local birthday parties and at-home Shabbos dinners.

In less than a year, Harvey has become Crown Heights’ unofficial mascot.

Dogs are an uncommon sight in all of New York’s Orthodox neighborhoods. Not so in this dog’s previous home, Park Slope, where Harvey was just another mutt on the street.

Referring to the spirit of Rabbi Menachem Mendel Schneerson, the late Lubavitcher rebbe, Kaplan, who though not Orthodox attends Chabad services and classes in Crown Heights, says, “I really can’t help feeling that the rebbe somehow played a part in bringing us here.”

Indeed there is something a little otherworldly in Harvey’s story, going back to his puppyhood. Animal rescue workers who were offering the very young Harvey for adoption at the foot of the Brooklyn Bridge on the morning of 9/11 told Kaplan of how he licked the dust off the faces of refugees from the attacks on the Twin Towers as they made their way across the bridge.

“Harvey was a 9/11 therapy dog,” says Kaplan. Days later, recognizing a dog who stood apart from the pack, she took Harvey home from the animal shelter.

“He was totally insane,” Kaplan says. His first true night of serenity came on Yom Kippur.

Menucha Soble, an early childhood therapist and Crown Heights native, sees a salutary effect in Harvey’s encounters with children. “Harvey can have a very beneficial calming effect on the kids,” she says. “He can help them overcome their fear of dogs and animals in general.”

Whatever lasting gifts Harvey bestows on local children, he certainly leaves them happy.

The siblings Strauss, old friends, descend on Harvey, who gets a moment off the leash. Their attention to Harvey is as much a competition as a gesture of collective devotion.

“I love Harvey the most,” proclaims 7-year-old Dovey, wrapping arms around his object’s soft middle.

“No, I love him more,” counters Tzvi Yehuda, 9, and moves to prove it. Tzvi is an unabashed dog kisser, and Harvey reciprocates with quick, broad licks along Tzvi Yehuda’s face.

Eight-year-old Schner picks up the leash and leads Harvey on a short sprint a few yards down the street and back again.

Chavi Strauss, the children’s mom, notes that the gulf between Orthodox Jews and dogs isn’t always the rule outside New York.

“I grew up ‘black hat’ frum in Miami and Denver,” she says, “and we always had dogs.”

Her husband, she adds, grew up in Seattle and had a dog.

“Around here,” she says, “people think dogs are unclean.”

Swinging down Lincoln Terrace, on the West Indian side of Eastern Parkway, Dale and Harvey run into 14-year-old Yojany, who crouches to bestow a tender frisking on the dog.

“He’s just so much nicer and friendlier than the other dogs,” Yojany says.

A bridge between the races in a 50-pound package, Harvey occasionally draws both Jewish and black Crown Heights kids for impromptu petting sprees.

After the kids, Harvey’s keenest fans are the alms seekers clustered on benches in front of 770 Eastern Parkway, the headquarters of the Lubavitcher movement. He nestles his muzzle into the lap of Miles Rappaport.

Back on Kingston Avenue, Harvey barks as he passes a bakery. Reading her cue, Kaplan ducks inside and returns with a cheese danish, Harvey’s favorite, which he promptly wolfs down.

The compliment issues from a clean-shaved middle-aged man, in a non-chasidic coat and hat, sitting on the bench outside Sweet Expressions, a kosher candy store. He introduces himself as A. Engler Anderson, an editor at the Philadelphia Jewish Exponent visiting Crown Heights.

Treating the supplicating Harvey to a thorough petting, he says, “The Lubavitch don’t know dogs. And what you don’t know you fear. The idea that dogs are unclean animals is more stressed here. It’s mystically based.”

Perhaps a bit tongue in cheek, he speculates: “They could learn from dogs. There would be less fighting in the shuls.”