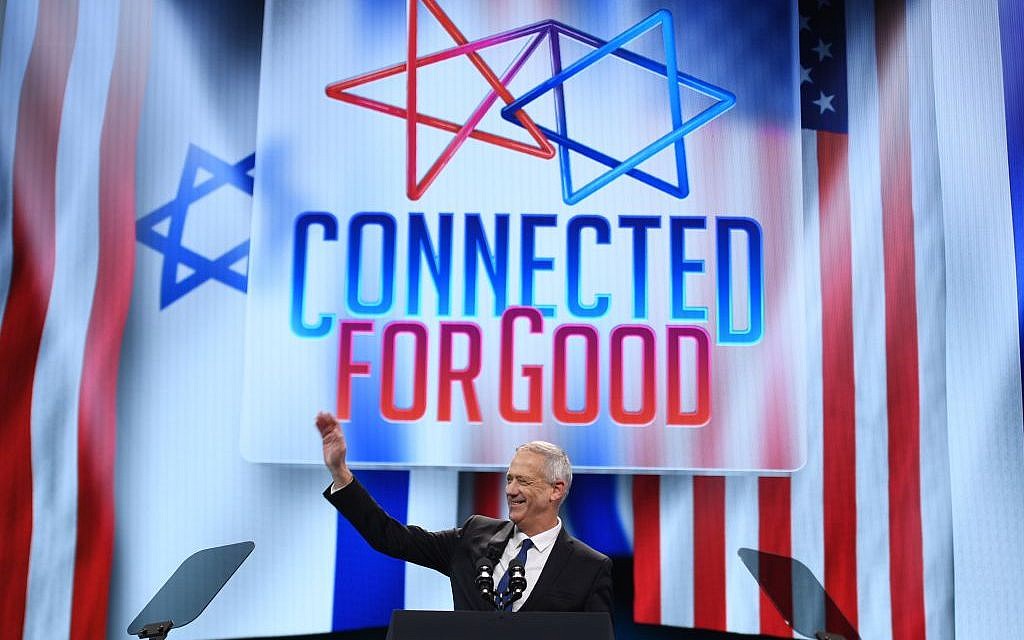 Retired Israeli general Benny Gantz, one of the leaders of the Blue and White (Kahol Lavan) political alliance, speaks during the AIPAC annual meeting in Washington, DC, on March 25, 2019. Getty Images

Washington, D.C. — Speaking slowly in his thickly accented English, Benny Gantz addressed the annual AIPAC policy conference on Monday morning. Despite his accent, Gantz, who as co-leader of the centrist Blue and White party is locked in a neck-and-neck race with Israeli Prime Minister Benjamin Netanyahu, spoke fluently and naturally as he moved around the stage — until he tripped over one word: bipartisanship.

“Bipartisanship, what a word,” he said, drawing laughs from the crowd. “I’m an Israeli, it’s very hard.”

Gantz was not alone in his struggle with bipartisanship. After years of garnering support from both sides of the aisle, AIPAC has come under increasing scrutiny from the left flank of the Democratic Party. Facing an increasingly partisan environment in Washington, at its conference this year AIPAC leaders walked a shaky tightrope between celebrating  the organization’s bipartisan friends and castigating those it views as failing to adequately support it and Israel.

“AIPAC’s been overtaken by partisanship, and they haven’t found their way out of the problem,” said an attendee who works on these issues on Capitol Hill and asked to remain anonymous due to the political sensitivities of these issues.

One member of Congress, Ilhan Omar, the freshman representative from Minnesota, loomed particularly large over the conference despite her absence at the sprawling Walter E. Washington Convention Center. Though her name was rarely mentioned, Omar’s rhetoric about Israel and AIPAC, a source of continued frustration in the Jewish community in recent months, was repeatedly invoked from the opening session of the conference on Sunday to its closing session on Tuesday. 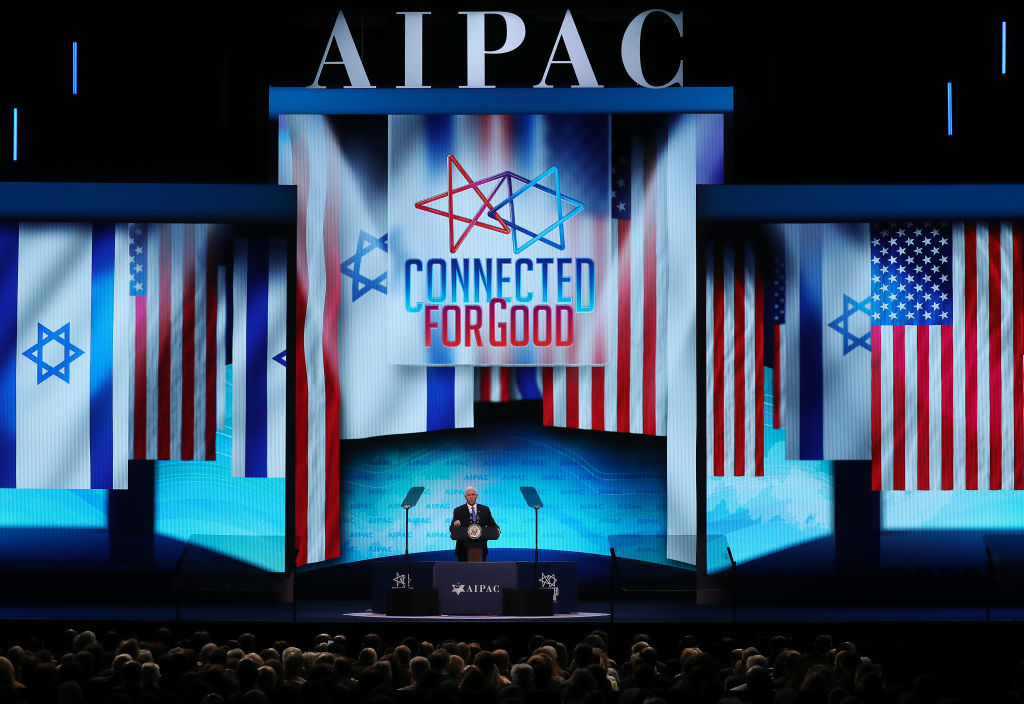 “The scurrilous charge of dual loyalty is a signal, and that signal, amplified by today’s social media, is now empowering people who have long opposed our cause, our movement, and frankly, everything we have built,” said AIPAC CEO Howard Kohr at Sunday’s opening session, referring to the recent controversy over Omar’s use of “dual loyalty” tropes. “Now we see the intense hatred of the Jewish state is creeping from the margins towards the center of our politics — places where political coalitions are built, places where this nation’s leaders gather to debate and make decisions.”

While Republicans condemned her remarks and the Democratic leadership for failing to adequately sanction her, Democrats distanced themselves from her with full-throated denouncements of anti-Semitism and support for the U.S.-Israel relationship.

“It may be that these views are confined to a small fringe … but kept unchallenged, the ancient slurs will be normalized,” said Senate Majority Leader Mitch McConnell on Tuesday. “Nobody in American politics should need reminding that anti-Semitism is uniquely disruptive.”

“Every decent human being has a responsibility to fight anti-Semitism,” said Secretary of State Mike Pompeo on Monday. “Anti-Zionism is anti-Semitism.”

Even Israeli Prime Minister Benjamin Netanyahu, joining the conference by a glitchy video stream after cutting short his trip to the U.S. due to rocket attacks in Israel, joined Omar’s critics. “Take it from this Benjamin, it’s not about the Benjamins,” he said, a slap at Omar for her tweet suggesting that politicians’ support of Israel was all about Jewish money.

At the same time, speaker after speaker repeatedly stated that support for Israel remains bipartisan.

“We will never allow anyone to make Israel a wedge issue,” said House Speaker Nancy Pelosi. “That pledge is proudly honored in this congress where support for Israel remains ironclad and bipartisan.”

“I am a part of a large bipartisan coalition in Congress supporting Israel — an overwhelming majority in the Congress of the United States,” said House Majority Leader Steny Hoyer on Sunday. About the dual loyalty charge, he said, “I tell Israel’s accusers and detractors, accuse me.”

Still, the message of bipartisanship was muddied at times by speakers from the Trump administration and Republican congressional leadership. 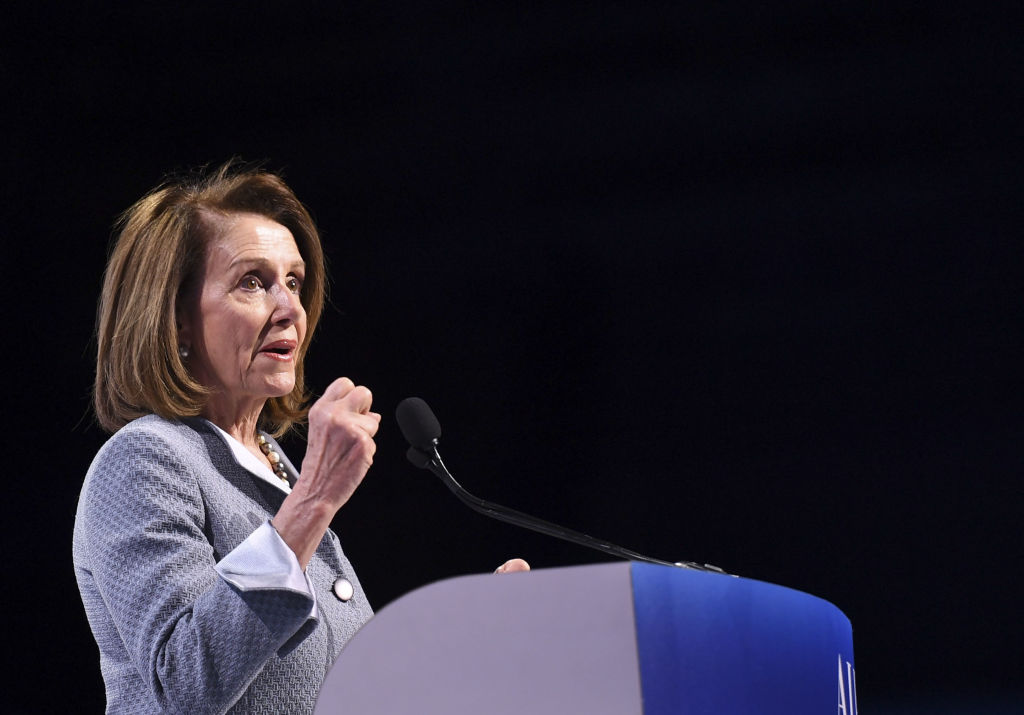 Speaker of the House Nancy Pelosi speaks during the AIPAC annual meeting in Washington, DC, on March 26, 2019. Getty Images

“Nobody in American politics should need reminding that anti-Semitism is uniquely disruptive,” said McConnell. “So I’m troubled that leading Democrats seem reluctant to call out problems within their own ranks … and I’m troubled that many of the declared presidential candidates seem to be avoiding this very gathering.”

AIPAC’s ability to draw bipartisan support has become an open question under the conservative Trump administration and as AIPAC’s own members have moved farther to the right. Several attendees noted that the conference has become more dominated by Orthodox attendees, the only Jewish denomination over the past five years to vote Republican and to approve of Trump’s performance in large numbers.

“It’s obvious from this conference that AIPAC is facing and will continue to face a serious challenge on bipartisanship, particularly if the era of Trump and Netanyahu is to continue,” said Debra Shushan, director of policy and government relations at Peace Now.

“The official conversation is how do we make sure that Israel remains a bipartisan issue. That’s not the real issue; it has remained a bipartisan issue in the Jewish community,” said Donniel Hartman, president of the Shalom Hartman Institute. “For some, Israel is an embodiment of their Jewish values, and for others it’s the antithesis of their values.” 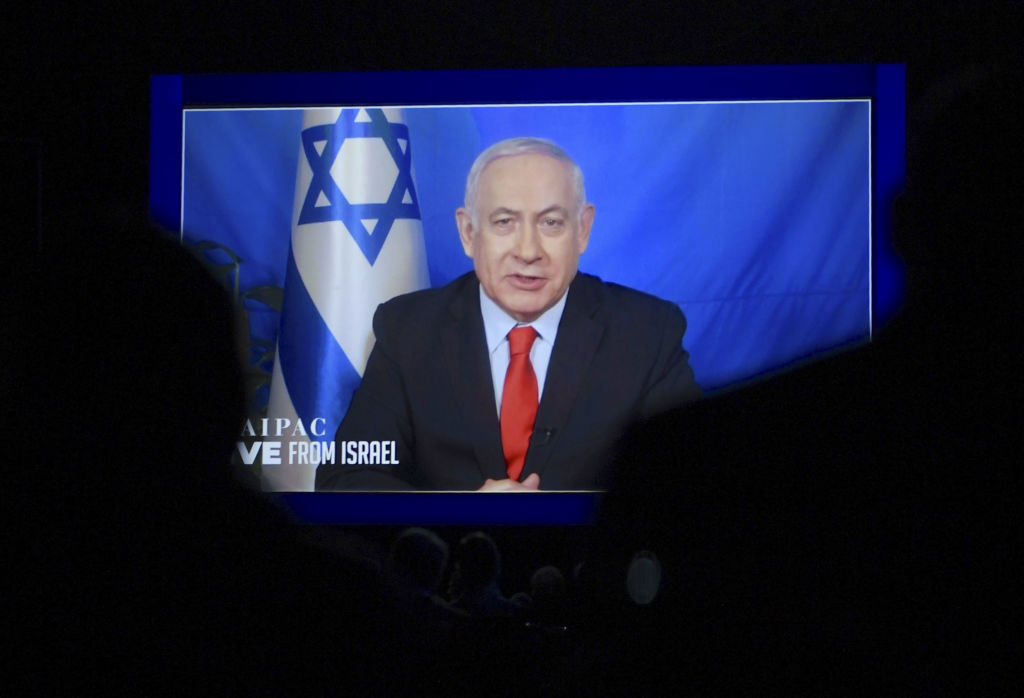 Prime Minister of Israel Benjamin Netanyahu speaks on screen from Israel, during the AIPAC annual meeting in Washington, DC, on March 26, 2019. Getty Images

Koplow noted the difference between the official pronouncements from AIPAC officials and the kinds of statements from Republican speakers that were applauded most enthusiastically by attendees. “I think it’s become a lot clearer that more of the AIPAC attendees lean right, and that the right-leaning speakers tend to get a lot more applause,” said Koplow.

Talk of the report by Special Counsel Robert Mueller, delivered on Friday afternoon to Attorney General William Barr, who wrote to Congress on Sunday that there was no evidence of collusion between the Trump administration and the Russian government during the election two years ago, made the partisan split even clearer.

On Monday, Vice President Mike Pence brought up the news to a supportive crowd. “Yesterday was a great day for our country,” said Pence just two minutes into his speech. “After two years of investigation and reckless accusations by many Democrats and members of the media, the special counsel confirmed what President Trump had said all along: there was no collusion between the Trump campaign and Russia during the 2016 election.”

The crowd erupted in applause.

“It doesn’t take much to whip this crowd into a politically conservative frenzy,” said Steve Rabinowitz, president of Bluelight Strategies, a media relations company specializing in progressive causes and Jewish organizations.

Pence also celebrated the Trump administration’s agenda on Israel over the previous year, including moving the United States embassy from Tel Aviv to Jerusalem, pulling out of the Iran deal and recognizing Israeli sovereignty in the Golan Heights. 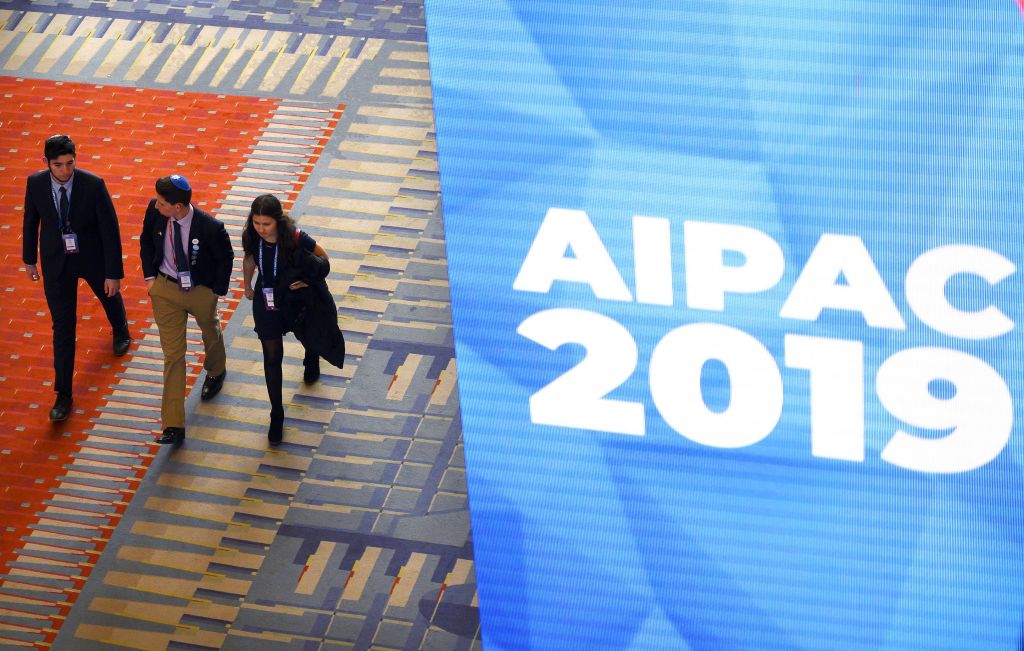 Though security experts largely agree that Israeli control of Golan Heights is a necessity for the security of northern Israel, last week’s announcement was seen as a political gift to Netanyahu, who is facing a tough challenge in Israeli elections that come just two weeks after the AIPAC conference. On Monday, the president signed the proclamation alongside Netanyahu.

Gantz, the decorated general and political neophyte trying to upset Netanyahu, was well received during his Monday speech. Especially so regarding his remark that “the Western Wall is long enough for all of us,” a reference to the longstanding Israel-diaspora tensions over egalitarian prayer at the Kotel. Gantz, a number of attendees said, came across like an old-fashioned, deeply Israeli founder-of-the-state generation, and a security-minded general. Some attendees said he benefitted from the fact that Netanyahu didn’t address the crowd in person.

AIPAC had been criticized for inviting Netanyahu after he encouraged a coalition between Israel’s right-wing parties and the Meir Kahane-inspired Otzmah Yehudit, a move that AIPAC itself criticized.

Nikki Haley, former ambassador to the United Nations, addressed this week’s rocket attacks on Israel during the conference. She noted the U.N.’s silence on the attacks, calling out that body’s double standards when it comes to Israel. “If it was any one of those countries, they’d be calling an emergency Security Council meeting,” she said to cheers from the audience.

As AIPAC’s citizen lobbyists headed to Capitol Hill, members of Congress could expect to hear a case for increased foreign aid to Israel as well as support for a House resolution sponsored by Reps. Jerry Nadler, Lee Zeldin and Brad Schneider, all three of whom are Jewish, condemning the BDS movement. The bill condemns but does not seek to criminalize the BDS movement and is seen as an attempt to fashion an alternative to Republican bills that would criminalize BDS and alarm advocates for free speech.

Summing up the conference and the tricky political balancing act AIPAC is now having to pull off, Peace Now’s Shushan said, “I think it’s new to AIPAC, frankly, having an administration in Washington that is to the right of AIPAC. How do you deal with that?”