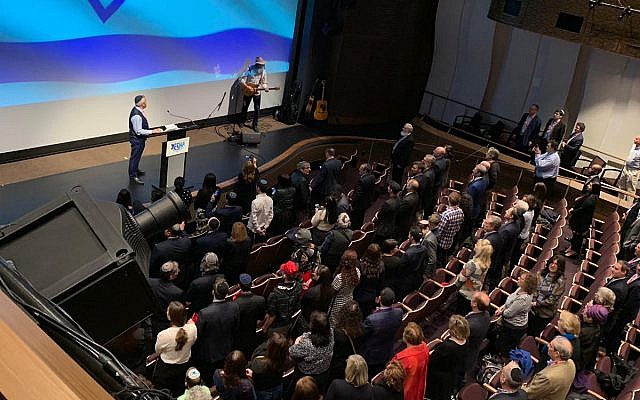 Washington, D.C. — If the formal AIPAC Policy Conference was a big-tent show of bipartisan support for the U.S.-Israel relationship, the after-parties that ended each day of the three-day conference were a demonstration of the tent’s more factional and fractious inhabitants.

Each night, young conferees hopped from hotel basement to upscale pub to social club to dive bar as happy-hour beers turned to late-night drinks. With more than 4,000 students attending AIPAC this year and several hundred young professionals, prime time for social networking was after the official conference sessions had ended.

Some events showcased mainstream organizations with broad bases of support, like those hosted by Israel Policy Forum’s Atid program for young professionals and Hillel International on Saturday night.

Other gatherings carried a more ideological bent. On Sunday night, partygoers could choose from receptions across the political spectrum, with events hosted by such groups as the Zionist Organization of America and Stand With Us and featuring organizations like the Alliance for Middle East Peace.

The Yesha Council, representing West Bank settlers, hosted an event Sunday evening at the evangelical-backed Museum of the Bible. Hosted by the Hebron community spokesman Yishai Fleischer, the event opened with a “Woodstock-style” rendition of the national anthem and “Hatikvah” and a video of West Bank communities captured from a bird’s-eye view. “If you listen to the media, we’re the occupation nation,” Fleischer told the audience. “The biggest war today is the narrative war, the alternative narrative that tells us that we are thieves.”

Speakers called out Rep. Ilhan Omar’s “chutzpah” and praised President Trump’s recognition of Israeli sovereignty over the Golan Heights, hoping for a future in which the same might apply to the West Bank. “Our objective is to be sovereign everywhere where Jews are living in the heart of Israel,” said Gideon Saar, a former Likud Knesset member who served as education minister.

At the Peacebuilders reception, also on Sunday night, speakers from the opposite end of the ideological spectrum attracted a large crowd to the Renaissance Hotel. Featuring people-to-people organizations and honoring such groups as the Alliance for Middle East Peace, Darkenu, and Givat Haviva, the event was one of the few places at AIPAC where the two-state solution was openly feted. Attendees heard from the Labor Party’s Stav Shaffir, the youngest Israeli ever elected to the Knesset.

On Monday night, the Jewish fraternity AEPi co-hosted a reception with Masa, which provides grants for young Jews to teach English inIsrael, and Hasbara Fellowships, which trains college students in Israel advocacy. At the same time, J Street hosted a happy hour down the street from the conference center and encouraged people to register for its conference in October. AIPAC hosted an LGBTQ reception that evening, as well.

As the general session opened early on Tuesday morning, young conferees straggled in. Bleary eyed and clutching coffee cups, they settled in for another hour of speeches, plenty of time to sleep off the previous night’s adventures before lobbying on Capitol Hill.