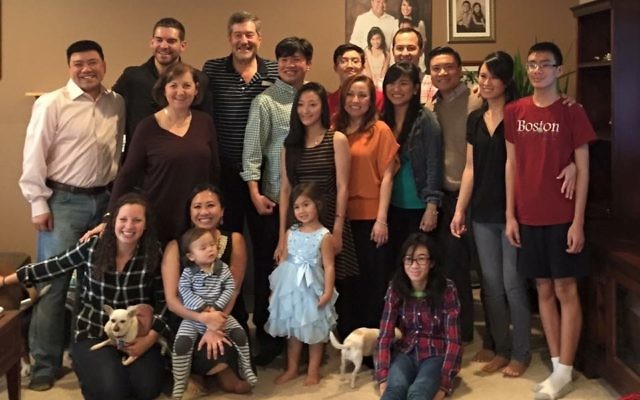 On Thanksgiving I was reunited with a Vietnamese family with whom I had no contact for more than 30 years. It was a heartwarming reunion and a poignant reminder that aiding immigrants and refugees is not only a matter of advocating enlightened policy, but also should be seen as a personal responsibility – and wonderful opportunity.

Our story starts in 1979, when I assumed my first professional position in the Jewish community as assistant director of the American Jewish Committee (AJC) in Philadelphia.  Many Vietnamese families — the so-called “boat people” — were arriving in the city and in other communities across the country. Soon after starting my job, I launched an initiative pairing AJC members with refugee families. I personally established a relationship with one family consisting of a father and four small children ranging in ages from three to nine.  They had meager resources, struggled with English and lived in a rough neighborhood characterized by frequent burglaries.

During the ensuing several years, I gave them a good deal of my attention. We took many excursions together to beautiful state parks, attended soccer games and other sporting events, and I helped the father navigate the confusing bureaucracy of refugee resettlement.  The youngest child suffered from severe asthma, and I often found myself taking him along with his father to hospital emergency rooms in the middle of the night.

Over time, we drifted apart, I suppose in part because they were less in need of my involvement. Then in the mid-1980s, I left Philadelphia and moved close to New York for a position at the Jewish Council for Public Affairs. From that point on we lost touch altogether. I often thought about this family, wanting to know what had become of them, and, of course, hoping for the best.  Semi-retired now and more reflective about the past, I decided to Google the father’s name.   Sadly, I uncovered his obituary from 2014.

But what about the four children? I wondered. The funeral home would not provide information about the family’s whereabouts, but did agree to forward a letter I wrote to the address of the principal contact.  About a week later, I heard from a very excited 43-year-old man, the second oldest of the four children. He said that for the last three decades his father and siblings regularly talked about my role in helping during those early years in Philadelphia, and of his dream that one day we would be reunited. Then one after another I started hearing from the other “children,” who all reported vivid and positive memories of our many times together.

My hopes for the family exceeded expectations. All four of them attended college and have become highly successful professionals. They are married, and three of them have beautiful children of their own.  Philadelphia, the city that opened its arms to them decades ago, remains their home.  My wife and I were invited to join them for Thanksgiving, which we had to decline. But we arranged to stop at the home where they were all gathering on our way to visit my wife’s family. The warmth with which we were greeted was overwhelming. Stories were shared and tears flowed as we caught up on our life experiences. The father who passed away last year, we agreed, was certainly with us in spirit. We left pledging that we would make new memories together, possibly a visit of all our families to Vietnam next summer.

Today the issue of how to respond to large numbers of refugees — this time from war-torn Syria — has become a matter of robust debate in our country. In light of Middle East-based terrorism, people coming from that region should undergo reasonable screening procedures.  At the same time, given our values associated with welcoming the “stranger” and our own history, it is appropriate that all the major Jewish public affairs agencies and religious movements are out front advocating on behalf of a generous admissions policy.

That said, collectively and individually, we can and should do more. The story of a Phoenix rabbi who welcomed a newly arrived Syrian refugee family to his Thanksgiving dinner resonated with me deeply. Let us as a community find ways of replicating this kind of experience, not only as a onetime occasion, but as an opportunity to establish deep bonds of friendship that can last a lifetime.

Martin J. Raffel formerly served as senior vice president of the Jewish Council for Public Affairs (JCPA). He is now an adviser at the Israel Policy Forum.