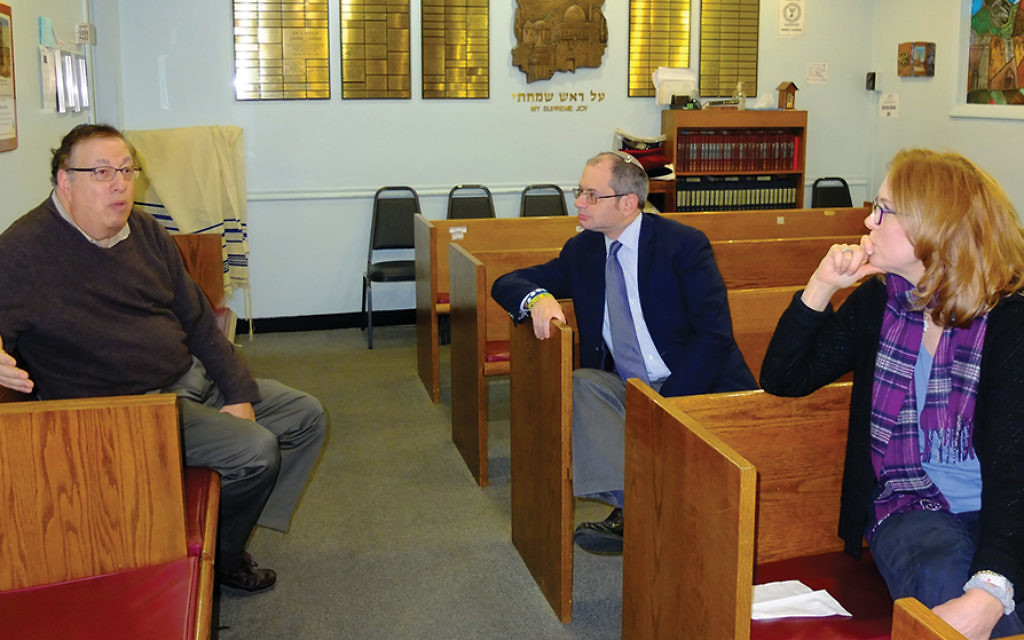 For most Jews, a synagogue is a place to turn to for spiritual health.

Today, in a sign of the demographic times, some synagogues are broadening their mission to care for aging members’ physical health by sponsoring their own staff nurses who tend to members’ medical needs.

Linda Liederman, the congregational nurse at the Hollis Hills Jewish Center in Queens, experiences this every Shabbat. As predictable as the snacks at the Shabbat morning Kiddush are the questions about symptoms, health insurance and prescriptions.

“I do not get a piece of cake,” said Liederman, a veteran home health care nurse who was appointed six months ago to the volunteer position; she continues to work full-time in home health care.

Many physicians and nurses are annoyed when people broach medical questions during such social situations.

Liederman views the weekly discussions over cake and kugel as a vital part of her responsibilities as congregational nurse, “an opportunity to see people,” she said.

The Hollis Hills Jewish Center, which established its congregational nurse program during the High Holiday season last fall, is part of a small but emerging trend in the American Jewish community. At a time of reduced synagogue memberships and declining affiliation, some congregations are reaching out in innovative one-on-one ways, especially to older members.

The program at Liederman’s synagogue does not exclusively serve a senior population, but about two-thirds of the people with whom she deals are 50 to 70 years old, or older, roughly reflective of the Conservative synagogue’s demographics, she said.

“In Queens County, many of the synagogues are experiencing aging issues,” said her husband, Arthur Liederman, the congregation’s president.

“The children are moving out,” he said, leaving many often-isolated seniors without someone around to help out with medical questions.

Such congregational nurse programs provide an invaluable service for the aging community, according to Kathryn Haslanger, CEO of JASA (Jewish Association Serving the Aging).

“For many older adults, religious institutions can be familiar places where they feel safe and comfortable, where they have trusted relationships. Connecting seniors to health and social service supports through synagogues helps seniors remain actively engaged in their communities,” Haslanger said via email. “It also creates a safety net for the most vulnerable members of our society.”

Rabbi Joseph Ozarowski, a chaplaincy expert, said, “any support we can give to the aging population is a good thing.”

This becomes increasingly true as more people choose to stay home as they age instead of moving to a more senior-focused environment, added Rabbi Ozarowski, a former spiritual leader of the Elmont Jewish Center on Long Island who now serves as rabbinic counselor and chaplain at Jewish Children and Family Services in Chicago.

“The needs of people aging in place are growing exponentially,” he said.

No local or national Jewish organization keeps track of the number of such congregational nurse programs, but an educated guess is no more than a dozen or two in the United States; the Hollis Hills Jewish Center’s is the second-known one in New York City. (Two months ago, Temple Gates of Prayer in Flushing inaugurated a program in which a nurse from the nearby Margaret Tietz Nursing Home visits the synagogue twice a month.)

There were only three congregational nurses in the U.S. 15 years ago, the Philadelphia Inquirer reported in an article about one such nurse who had started working in the area.

The Jewish community’s congregational nurses are an offshoot of the parish nursing movement. The practice, also known as church nursing or faith community nursing, has roots in the Middle Ages and began in its contemporary form three decades ago. Today it includes some 15,000 registered nurses, and congregational nursing is recognized as a specialty in the nursing field.

A few activists started to encourage Jewish institutions in the U.S. to adopt the Christian model early in the 21st century.

“Why not make synagogues — already spiritual places of education, worship, and fellowship — places of community support, health education, healing support, and medical support?” Jaclyn Herzlinger, a veteran congregational nurse in Springfield, N.J., wrote in the journal Sh’ma in 2003. “Jewish congregational nurses can … empower our own communities to incorporate health practices and spiritual thinking into the daily lives of Jews.”

Rabbi Weintraub also has urged synagogues to establish their own programs. “Some 15-plus years ago, the Jewish Board’s National Center for Jewish Healing was part of an effort that UJA-Federation helped support called ‘Shleimut’ [Wholeness] … [that] furthered the idea of congregational nurses with some trainings and conferences and publications,” he said. “The funding dried up, alas.”

Karen Frank, director of Project SHIN (Spiritual Healing Integrating Nursing), one of the Jewish community’s first congregational nurses, works for Congregation B’nai Abraham in Livingston, N.J.; she earlier worked for a consortium of five synagogues and the MetroWest Jewish Health and Healing Center, a joint program of her local Jewish Community Center and Jewish Family Service center. On house calls she brings a Book of Psalms along with her stethoscope and blood pressure monitor.

Linda Liederman, who has worked in hospital intensive care units and doctors offices, deals with a few congregants a week, mostly over the phone, but occasionally goes to members’ homes and hospitals and hospice settings.

“The word hasn’t really gotten out,” she said one recent morning, sitting in the pews of her synagogue, across from her husband and Rabbi Wise.

The Hollis Hills Jewish Center, which has 240 member families, established its own congregational nursing program as part of its wider chesed activities, following a strategic planning self-study three years ago, said Arthur Liederman, who initiated the project. It is, he said, part of what author Ron Wolfson calls “relational Judaism” — synagogues that are centered around the needs and concerns of individual members, rather than the institution’s collective requirements.

“I think it’s terrific. Anytime a synagogue can offer a personal connection that assists people in living a more purposeful life is the core of what our institutions should be doing,” said Wolfson, a professor of education at American Jewish University in Los Angeles. “It’s an example of caring for people in their hour of need.”

Arthur Liederman agrees. “These are values that make us who we are. This is not a marketing strategy,” he said. “This is what synagogues should be doing.” In the long run, he said, such a program may be part of the congregation’s overall “vision” that will attract or retain members, “a marker for families who are considering what kind of Jewish community they want to settle in.” But it is now too early to see those results.

Rabbi David Wise, the Jewish Center’s spiritual leader for a decade, said a short-term gain is apparent; congregants tell him, “I never knew the shul cared so much.”

Congregations’ rabbis are often the first people to hear when members — especially the older ones who lack a support system nearby or a family physician — are experiencing medical problems, or to notice when someone is not showing up at shul. Often, “people don’t feel comfortable going to a doctor” when a health issue arises, the rabbi said. “Often, it falls through the cracks.”

Rabbi Wise gives the congregational nursing program his enthusiastic blessing, but, because medicine is not his “skill set,” he refers congregants with health concerns to Linda Liederman. Her availability and contact information is included in the synagogue bulletin.

Funding, or the fear that a paid nurse’s salary, even part-time, will be beyond a shul’s budget, is one reason why few congregations have established their own nursing programs. Another is the sheer novelty of them. “People haven’t thought of it” — it’s not a traditional part of a synagogue’s responsibilities, although it’s reminiscent of the Old Country-type of communal responsibility, Arthur Liederman said.

As congregational nurse, Linda Liederman serves as a consultant; because of insurance liability restrictions, she does no hands-on activities like taking blood pressure or giving injections or recommending medications.

Rather, she listens to congregants’ worries. She gives advice, she said. She educates and “validates.” She interprets physicians’ instructions, explains medications, seeks advice from fellow health care professionals who belong to the Jewish Center, and she makes phone calls to insurance companies. She’ll get people’s Hebrew names for misheberach prayers to be recited at the synagogues.

“I do a lot of hand-holding,” she said. The men and women who seek her out “want to talk with me. They want to speak.

“I consider myself a professional on the chesed committee,” she said.

Under Rabbi Wise’s leadership, his synagogue has incorporated such value-added features as participation in a Community Supported Agriculture program, and use of a state-of-the-art app that helps congregations coordinate their chesed activities.

As usual, Linda Liederman expects to hear some medical questions over Kiddush at the Hollis Hills Jewish Center this Shabbat. As usual, she said, she will welcome the questions.