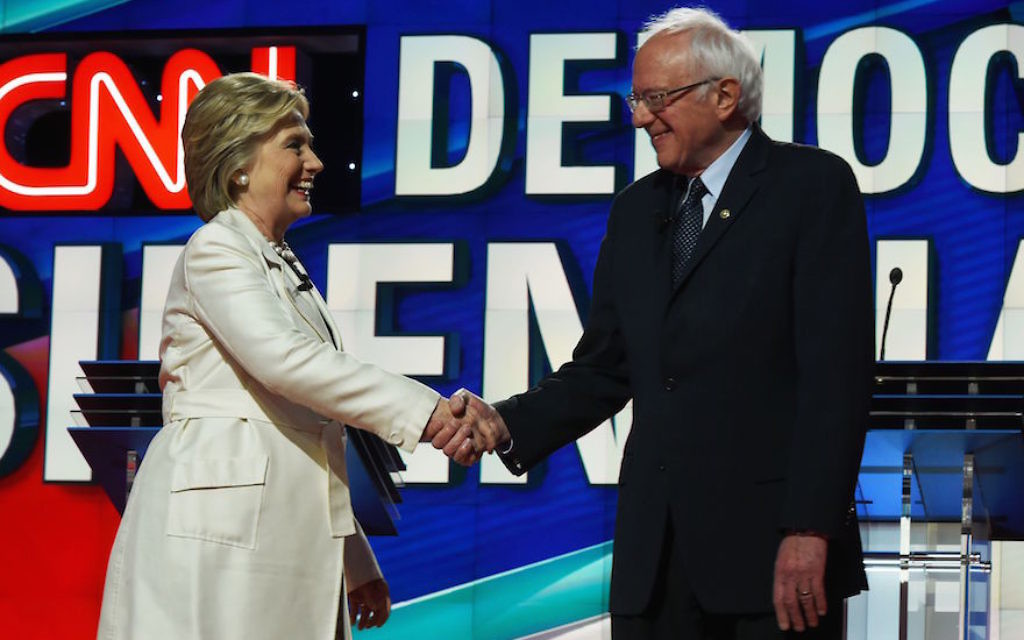 WASHINGTON — The combative tone in Bernie Sanders’ campaign statements faded on Tuesday evening to a softer pitch of persuasion.

“I congratulate Secretary Clinton on her victories tonight, and I look forward to issue-oriented campaigns in the 14 contests to come,” Sanders’ statement began after his rival for the Democratic presidential nod, former Secretary of State Hillary Clinton, rolled to victories in four of the five states in play that day.

Prior to the statement, Clinton had “applauded” Sanders and his causes, signifying a party ready to rally toward the general election and a likely contest between Clinton and Donald Trump, the Republican front-runner who swept the five primaries on Tuesday.

Aides to Sanders, the Independent senator from Vermont, in recent days had presaged a “reassessment” of the campaign should Clinton perform well in the Tuesday contests. Sanders’ statement encapsulated what “reassessment” looks like going forward, in effect acknowledging that Clinton is the likely candidate while remaining in the race to influence the shape of the Democratic Party in years to come.

“This campaign is going to the Democratic National Convention in Philadelphia with as many delegates as possible to fight for a progressive party platform that calls for a $15 an hour minimum wage, an end to our disastrous trade policies, a Medicare-for-all health care system, breaking up Wall Street financial institutions, ending fracking in our country, making public colleges and universities tuition free, and passing a carbon tax so we can effectively address the planetary crisis of climate change,” Sanders said.

Absent from that “fight for” locution is the prize Sanders has insisted until now should be his: the nomination.

Sanders already appeared to be shifting his tone in a Philadelphia town hall broadcast Monday evening by MSNBC, where he quashed any notion that he would not enthusiastically back a Clinton candidacy.

“I will do everything in my power to make sure that no Republican gets into the White House in this election cycle,” he said.

Clinton for her part appeared ready to embrace Sanders’ call for unity, echoing many of his platform planks in her victory speech in Philadelphia.

“I applaud Senator Sanders and his millions of supporters for challenging us to get unaccountable money out of our politics and giving greater emphasis to closing the gap of inequality,” said Clinton, a nod to his sharp criticisms of how she has raised money for her campaign.

The former New York senator and first lady also said she would “keep our troops out of another costly ground war in the Middle East,” another nod to a weakness of Clinton’s that Sanders has exploited — her 2002 vote for the Iraq War, which he opposed.

“Whether you support Senator Sanders or you support me, there’s much more that unites us than divides us,” she said.

“Now, the other day, Mr. Trump accused me of playing the, quote, ‘woman card,’” she said. “Well, if fighting for women’s health care and paid family leave and equal pay is playing the ‘woman card,’ then deal me in!” The crowd roared.

The real estate magnate and reality TV star, delivering his victory speech from his corporate headquarters in Manhattan after Clinton had spoke, took the bait – wittingly or not, it was not clear.

“If Hillary Clinton were a man, I don’t think she’d get 5 percent of the vote,” he said. “The only thing she’s got going is the woman’s card.”

Literally within minutes, the Clinton campaign had mashed the speeches together and posted an ad on social media.

Trump called himself the “presumptive nominee” and said Cruz and Kasich should leave the race. The senator and governor have teamed up, divvying up states, in an effort to deny Trump the nomination and force a sequence of votes at the convention in Cleveland.

Clinton’s wins reflected a resurgent Democratic establishment: Party-favored candidates beat back progressives in Senate nominating contests in Pennsylvania and Maryland. In both states, the defeated progressives – former Rep. Joe Sestak in Pennsylvania and Rep. Donna Edwards in Maryland — in the past had tangled not only with their party bosses, but with the mainstream pro-Israel community.

The winners in those states were Rep. Chris Van Hollen in Maryland, a popular chairman of the Democrats’ congressional reelection campaign from 2007 to 2011 who has close ties to the pro-Israel community, and Katie McGinty, a chief of staff to Pennsylvania Gov. Tom Wolf who was handpicked by Sen. Chuck Schumer, D-N.Y., a contender for the leadership of the Senate Democratic caucus next year.

One bright light for progressives was Maryland State Sen. Jamie Raskin, who won the nomination to replace Van Hollen in the 8th District, comprising the heavily liberal Maryland suburbs of Washington, D.C. Raskin is a likely shoo-in in November.

Raskin, like 10 percent of Montgomery County, which is part of the district, is Jewish. During his campaign he has talked up visits to Israel to hang out with family. A professor of constitutional law at American University in Washington, he also was backed by an array of progressive groups, including J Street, the liberal Jewish Middle East policy group. (J Street also backed two other candidates in the nine-candidate race for the Democratic nod.)

Also endorsing Raskin was the Freethought Equality Fund, a political action committee that advocates on behalf of atheists and humanists. In its statement, the PAC said Raskin is on the board of the American Humanist Association.

Should Raskin win, the fund’s statement said, he would be “the only open nontheist serving in the U.S. Congress.”

According to the Washington Jewish Week, Raskin and his family are members of the Reform Temple Sinai in Washington.