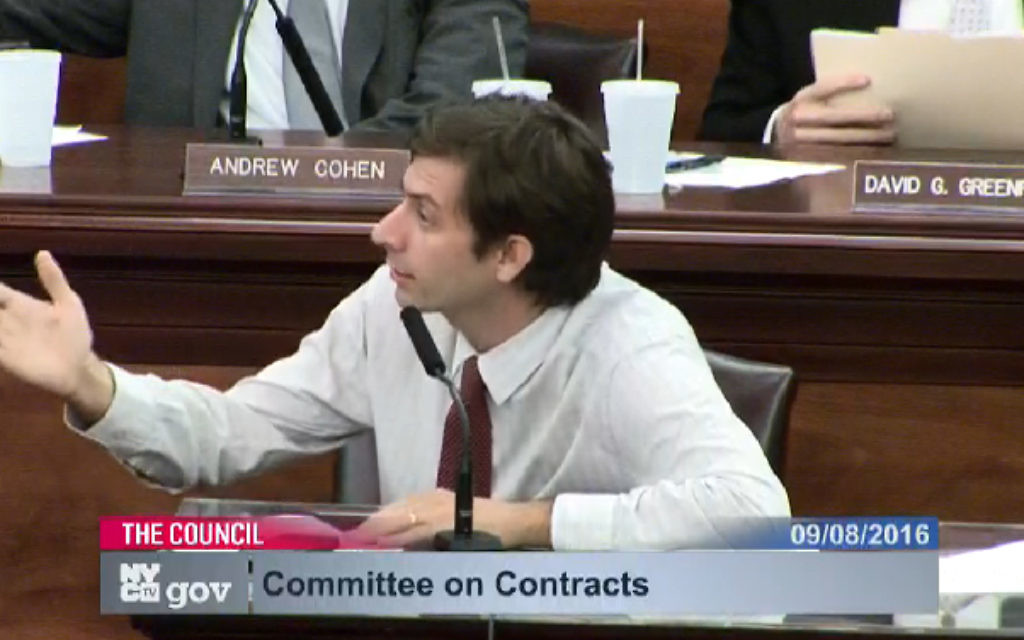 The full text of Councillor Levin's statement explaining his decision, is published below:

Over the past several months we at the City Council have been contemplating and discussing a resolution sponsored by my colleague Andrew Cohen condemning the Global Boycott, Divestment and Sanctions Movement (BDS) and all efforts to delegitimize the State of Israel.

The BDS movement has recently gained support in many circles, including on many college campuses around the US and here in New York City. As someone who identifies as Jewish, who believes in the State of Israel as a national home for the Jewish people, who believes in a two state solution with a secure Israel and an independent Palestine in Gaza and the West Bank, who respects our American tradition of protest and right to free speech, who believes in the rights of all humans to live in peace, security and self-determination, and who believes that peace in Israel/Palestine is achievable in our time, I was and am very conflicted about the City Council taking on perhaps the most intractable issue in the world.

During the past few months, I have often recalled the time, 21 years ago, when I was 14 years old, learning of the assassination of Israeli Prime Minister Yitzhak Rabin one Sunday morning. I didn’t know then why it was so important, and so tragic, but in time I came to realize what Rabin’s assassination, at the hands of a radical anti-peace Jew, has come to represent: it was a victory of hate over love, perpetual discord over peace. In the intervening years, we have seen, too many times to count, bloodshed avenging bloodshed, over and over, in a seemingly never ending cycle. We have seen moderate voices on both sides sidelined, mocked. To be unabashedly pro-peace, pro-two state in 2016 is to be seen as naïve or worse. I proudly stand today and say that I am pro-peace, pro-two state, Israel and Palestine, and that I oppose any and all efforts that undermine that goal.


That means that I unequivocally condemn the virulent anti-Jewish positions, incitement and actions of Hamas and all acts of terror and violence aimed at Israeli citizens. Israeli citizens have the right to live in security in a sovereign nation now recognized by the United Nations and the world community for almost 70 years. I also oppose some basic tenets of the Global BDS Movement. While I respect individuals’ rights to engage in boycotts that are focused on occupied territory beyond the Green Line while recognizing Israel’s right to exist and supporting a two-state solution, the BDS movement’s own platform does not recognize Israel’s right to exist and many in the BDS movement, including some who testified at the recent Council hearing, do not support a two state solution. As a matter of bedrock principle, Israel’s right to exist as a nation and a state must be explicitly recognized, and any equivocation or ambiguity is in fact tantamount to denial. For that reason, I am signing on as a co-sponsor of the Council resolution.

But it also means that I oppose the construction of new Israeli settlements in the West Bank, the expansion of existing Israeli settlements in the West Bank, and the military occupation of land beyond the Green Line. My reason is two-fold: first, Palestinians living in the occupied territories are, and have been for the past 49 years, living without their full inalienable rights of liberty, equality and self-determination, as defined in the Universal Declaration of Human Rights. Second, if Israel were to annex the West Bank and afford all the equal rights of representation to all Palestinians in West Bank and Israel proper, Israel would eventually cease to be a Jewish state. So, it is clearly in the long term interest of Israel itself to work for a two state solution as soon as possible for it to survive as both a Jewish and democratic state.

There are times that I, and many who believe that peace is possible, may grow despondent.

The prospects for peace are dimmer now than they were 20 years ago. At those times we should remind ourselves of Yitzhak Rabin and the many others, Israelis and Palestinians, who had the courage to risk their lives, and give their lives, to stand up — sometimes to their own countrymen — and fight against hate and perpetual discord and fight for love and peace. As we approach a full century of conflict between Jews and Arabs — Israelis and Palestinians — over the national aspirations of both peoples, we need some of their courage.