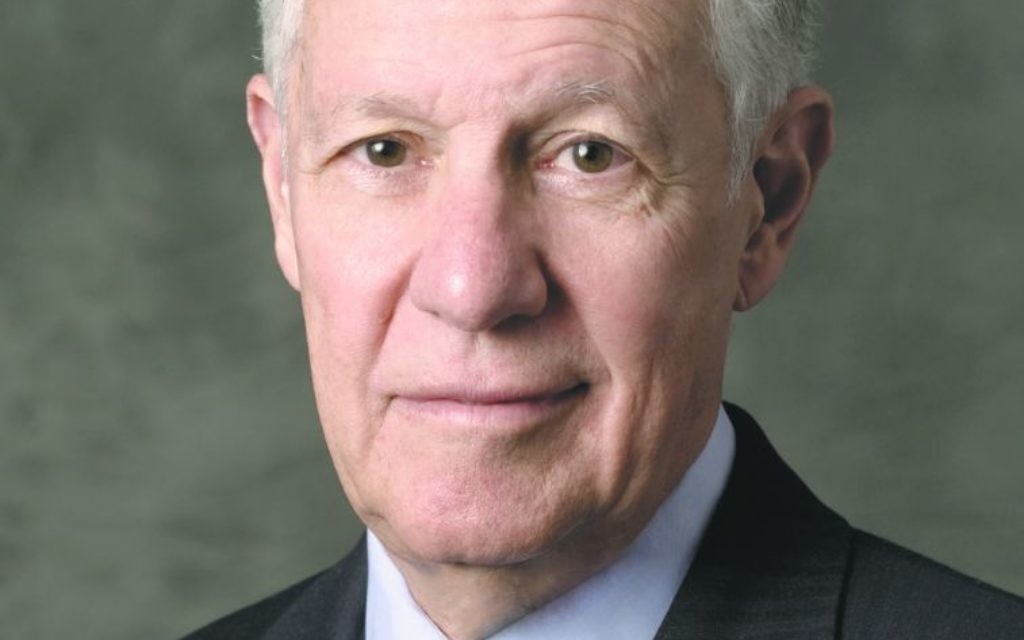 Robert G. Sugarman of Manhattan will be completing his three-year term Nov. 15 as national chairman of the Anti-Defamation League. Both his parents and his uncle were longtime ADL leaders, and Sugarman has served as a national commissioner for nearly 30 years.

A graduate of Yale University and Yale Law School, Sugarman, 73, is a past president of Hillel of New York and was active in UJA-Federation of New York and the Museum of Jewish Heritage.

Q: What were some of your priorities at the ADL during the nearly 30 years you served as a national commissioner?

A: One of my priorities was the religious freedom work that the ADL does. It has been hugely important to maintain a separation of church and state. The U.S. is said to be the most religious country in the world, and in my view it is because the government does not get involved in religion — and religion can thrive without government interference.

There are some people who believe the ADL and the Simon Wiesenthal Center — and to a lesser extent the American Jewish Committee — do much the same work in combating anti-Semitism. Is it really necessary to duplicate efforts?

My view is that it’s healthy that there is more than one organization doing similar things, principally because it gives more and more people an opportunity to become actively involved. The ADL and the AJC have active and vibrant lay leadership all over the country, and if there were only one group it would limit the number of people who could actively be involved, which would not be a good thing.

Abe Foxman, the longtime national director of the ADL, is 72. Have plans been worked out for his successor when he retires?

For a number of years there has been a small, very informal committee made up of the past and present chairs that talked of Abe’s eventual retirement. … Abe’s contract has been renewable every five years, and it is being discussed right now. The new term has not been set, but the timing of his retirement is now under active discussion, and he has been an active participant in those discussions.

The European Union Agency for Fundamental Rights published in June “Manifestations of Anti-Semitism in the E.U.” The Obama administration in 2009 tapped Hannah Rosenthal as a special envoy to head the newly created Office to Monitor and Combat Anti-Semitism. How do you view such efforts?

I see their role as helping and complementary because they add the resources and the imprimatur of the government. I’m familiar with Hannah’s work. During her tenure, the State Department report on anti-Semitism has grown to report on 130 countries; when she started it was 18. We think it is very healthy and not at all competitive. We work with them and give them the information we have.

What does it tell us that the E.U. is now doing similar monitoring?

It’s good news and bad news. It’s bad news because there must be a reason for them to be doing it. Anti-Semitism is alive and well, and the E.U. realizes this is the case and pays attention to it; that can only be helpful.

The man behind the anti-Muslim movie clip that sparked riots in the Arab world is said to be a Coptic Christian from Egypt. But he initially told the media that he was an Israeli Jew who had 100 Jewish backers for his film. What was the impact of his claims?

It was clearly very damaging. And the fact it has been established that he is not an Israeli Jew may not reach the masses all over the Middle East; the initial report could well still resonate.

It reminds me of the post-9/11 world. The word was that the Israeli Mossad did 9/11, because Jews who worked in the World Trade Center did not show up for work. The truth is that there were many Jewish victims on 9/11, [but] many in the Muslim world believe it to this day. So I fear that the initial identity of the producer as an Israeli Jew will continue to resonate.

Do you believe the ADL was right when it decided to no longer categorize all swastika graffiti as anti-Semitic?

I do, because the swastika has become almost a universal symbol of hate.