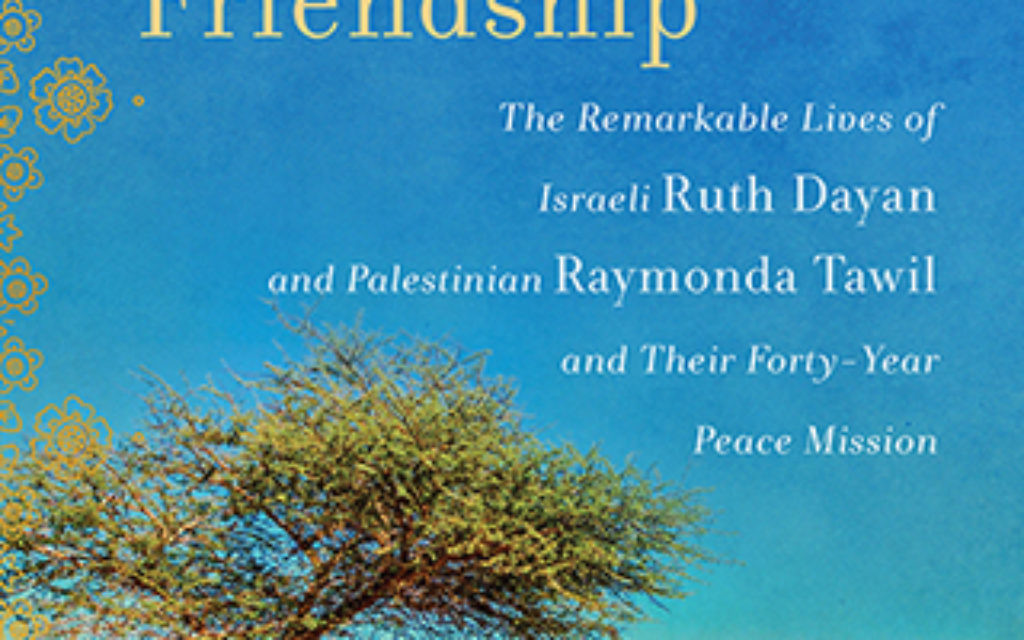 The former wife of Israel’s most famous general, and a Palestinian journalist and activist have been talking, meeting, trying to understand each other, fighting, reconciling and laughing together since a chance meeting soon after the Six-Day War.

Ruth Dayan, now 98, was bringing toys to wounded children in a Nablus hospital. Raymonda Tawil, alsot there to visit the children, recognized her immediately and shouted in perfect Hebrew, “How dare you come in here pretending to care for children. Do you know what your husband is doing to us?”

“I don’t believe we’ve met,” Dayan replied. “But you should know, I married a farmer and NOT a general. Don’t blame me for all this horror.”

As Dayan would reply many times to the woman who would become her dear friend, “I am NOT Moshe Dayan.” She then went on to listen to the stories of the women who gathered.

Last week, on the phone from her home in Malta, with Dayan on the line from Tel Aviv, Tawil, 74, who is the mother-in-law of Yasser Arafat, recalls, “We were not kind to her. But we felt her humanity. She looked at us with light in her eyes.”

In “An Improbable Friendship: The Remarkable Lives of Israeli Ruth Dayan and Palestinian Raymonda Tawil and their Forty-Year Peace Mission” (Arcade), Anthony David transports readers across the divide. It’s a well-written book about empathy, hinting at possibilities for peace.

David provides valuable reading, especially for American Jews who will see the history of Israel anew through the life of Dayan, and will come to see a perspective they don’t often encounter firsthand, in the experience of Tawil.

Dayan, the daughter of Jerusalem lawyers well connected to the Zionist leadership, was born in Palestine in 1917 and raised in part in London. Her grandfather Boris from Kishinev had studied at the Sorbonne and moved to Palestine in 1903. In 1934, Ruth met Moshe while at Nahalal, the farming village where his family lived, and they married in 1935.

David points out parallels between the women’s distinguished family backgrounds without suggesting that their experiences were equivalent.

Tawil’s father Habib Hawa, who also studied at the Sorbonne, was called “the Syrian Prince” by the British. His family had a castle not far from Nahalal. Her mother, who was raised in New York and returned to her village near Haifa, had “New York attitudes about gender, democracy, equality” that were, as David writes, the source of her daughter’s feminism. Tawil’s mother also taught her about avoiding hatred. After her parents’ 1947 divorce, she was raised in convent schools.

In our telephone conversation, both women remember the days following the Six-Day War differently. Dayan, with her phenomenal memory, recalls walking in the Old City of Jerusalem and feeling very comfortable, reconnecting with friends not seen since 1948. For Tawil, while she had the freedom to travel back to Haifa, “it was not the opening of the gates but the Occupation. For us it was defeat.”

In 1953, Golda Meir, then the Labor minister, asked Ruth Dayan to head up a department for women’s work. Dayan founded Maskit, promoting handicrafts and training new immigrants and Arab villagers to produce items for sale. The business flourished, and she still travels to visit villagers and see their work. Meanwhile, Tawil was reading voraciously, finding her feminist voice in her traditional marriage, advocating against honor killings, eventually becoming the first woman to drive on the West Bank, and turning her home into a salon for journalists, intellectuals and left-wing Israelis. The book includes the difficult-to-read account of her solitary confinement by Israeli authorities.

While their friendship wasn’t a secret, it wasn’t well known, outside of their close circles. They would meet to talk, share ideas about their work, and Dayan would use connections to pull strings and carry messages from Tawil to the Israeli government. She is the sister-in-law of Ezer Weizman, aunt of Uzi Dayan, who built the Separation Wall, friend of Shimon Peres (and the list goes on).

David began working with them in 2009, and would meet with Dayan in Tel Aviv, and Tawil in Malta, in person or by Skype. Once, the three were together in Baltimore. Along the way, there were flare-ups between the two, usually over a small detail that pointed to a more fundamental difference.

“Both of them were right from my perspective – it was a ping pong match going back and forth,” David says. They’d argue and then they’d be back in each other’s arms. “They really love each other,” he adds.

David, an author of books on kabbalist scholar Gershom Scholem, publisher Salman Schocken and of “Once Upon a Country: A Palestinian Life,” with Palestinian leader Sari Nusseibeh, brings a biographer’s eye for detail and nuance, and the sensibility of a Middle-Eastern insider and outsider to the project. The 50-year-old scholar was first drawn to visit Israel while studying philosophy in Berlin in 1992; he and a friend were beat up by skinheads after attending a Kristallnacht service. In Jerusalem, he immediately felt at home, particularly among Sephardic people, who reminded him of his relatives in New Mexico, where he was born.

On both sides, David is a descendent of Sephardic Jews who left Spain for the American Southwest; all became Catholic. He was raised with an awareness of his family history.

“When in Israel, I identify as Jewish, without denying the Catholic side. I feel like I’m a hybrid. I have no problem going to synagogue on Saturday and mass on Sunday, without theological beliefs, but appreciating beautiful ceremonies,” he says.

“It’s easy for me to fit into other people’s skin. I have so many different layers of skin.”

On the phone, the women praise each other. Each favors a two-state solution and would like to see the walls separating the two peoples lifted.

“I hope the book will be a strong message to end the bloodshed, that we can talk,” Tawil says.

Dayan adds, “The only thing is to communicate. To stop running around in circles and trying to kill each other.”