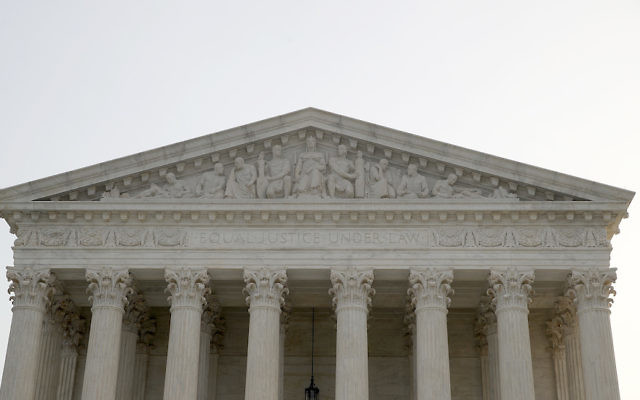 As with so much else in these contentious times, religion finds itself at the barricades, not only within the pews (and with those avoiding the pews) but in the courtrooms. It’s been estimated that there are hundreds, if not thousands, of court cases about religion across the land — many involving or arousing the interest of the Jewish community. There are storm warnings, the sense that the winds are blowing almost all religious litigation in the direction of the Jewish community.

Can the state force an Orthodox shul to rent its social hall to a gay wedding? No, “everyone has assumed not,” Marc Stern, general counsel of the American Jewish Committee, told us. “But I can’t say with great confidence that someone won’t. Eventually we will have such cases. More likely, we might see tax exemption challenges to churches and synagogues that don’t recognize same-sex marriage.”

Do religious institutions have the right to create a safe space of their own? There is no consensus even among traditionally observant Americans as to what is religious safe space. Yeshiva University employs a transgender professor at Stern College. This month, in Kansas, a student was denied admission to a Christian school because his parents are gay.

In March, Education Secretary Betsy DeVos announced that her department will basically ignore previous regulations that prevented religious organizations from getting federally financed educational services. Her position is supported, in part, by a 2017 Supreme Court ruling that Missouri acted unconstitutionally when it would not assist a church school, as it assisted public schools, with its playground surfacing.

Was helping a church school establish a safer playground a violation of the First Amendment? Justice Sonia Sotomayor asked whether playgrounds were always secular if within a religious school: “The church has a religious mission, one that it pursues through the learning center. The playground surface cannot be confined to secular-use any more than” it can be said that the nails have nothing to do with the wood of an altar.

DeVos pointed to a federal law mandating “equitable services” as long as those services were not religious or ideological. DeVos issued a statement: “Those seeking to provide high-quality educational services to students and teachers should not be discriminated against simply based on the religious character of their organization.” The House committee on education is checking if laws are being broken.

In March, Agudath Israel, the largest charedi group, met with Attorney General William Barr in Washington, D.C., in the wake of what Agudah saw as an increasingly frequent use of local zoning laws and other regulations aimed at restricting the spread of Orthodox communities. Chaskel Bennett, a member of Agudah’s board of trustees, said that to hear Barr’s “unapologetic support for religious rights is deeply reassuring.”

Of course, what is reassuring to one Jew is troubling to another.

The Jewish community, without almost any denominational consensus on these issues, presents Stern and the non-denominational AJC with a quandary: How to navigate church-state cases? “It’s been hard,” said Stern. “Our legal committee has been decidedly centrist. Some say there is never a ‘free exercise’ right to discriminate. We refuse to say that. It has to be weighed case-by-case. We’ve tended to write briefs that recognize that these cases are difficult, that there are legitimate interests on all sides that need to be accommodated, if possible. Some are more comfortable taking more strident positions, but that’s not our persona, not where we are ideologically.”

The New York Times recently wrote that “the Trump administration has made extending protections to religious organizations a priority.” But even as that is the case, religious protections are being eroded and challenged by local governments and secular organizations on the local level.

Most city and state regulations are crafted to protect minorities, but what is a minority? Several years ago, during the Bloomberg administration, seven Satmar chasidim were heavily fined by the city’s Human Rights Commission for posting a request for customers to wear modest dress in the Satmar shops. Was that the Satmar minority’s right under free speech and the free exercise of religion? Or was the disadvanteged minority a non-chasidic woman who sees a sign asking her not to wear sleeveless tops or shorts? The fines from the city would have put the shopkeepers out of business. The chasidim were supported by the multi-denominational Jewish Community Relations Council and the AJC, because of the case’s implications for religious rights and freedom of speech. The Human Rights Commission dropped the case.

Not long after, in 2016, the Human Rights Commission, for the sake of fighting gender discrimination, attempted to stop a public swimming pool in a chasidic neighborhood from having separate swimming hours for men and women, an accommodation sought by Orthodox women. That case was eventually dropped, as well, but Stern tells us that this month the Third Circuit Court of Appeals in New Jersey is hearing a “separate-hours swimming pool case” involving a mostly Orthodox gated community. The case pits the Orthodox “free exercise” of religion against a counter-claim that the condominium’s same-sex accommodation to the Orthodox is in violation of the Fair Housing Act.

“It never seems to occur to those that challenge [religious accommodations] that without these accommodations, Orthodox Jews are the ones who couldn’t use the facility.” Stern added that we’re seeing cases that are not in the spirit of “live and let live,” but cases meant to prove a point, or punish.

In 1925, mournful parents in Maryland erected a 40-foot cross of granite and cement, a memorial to their 49 sons who died in World War I. The cross sits on land now owned by the state. The State of Maryland, along with the American Legion, now find themselves in court. Objecting to the cross are the American Humanist Association, supported by various atheists; the Baptist Joint Committee for Religious Liberty; the Central Conference of American Rabbis (Reform); and the AJC.

The AJC’s Stern said the state’s support for the “Christian monument … clearly has failed the test of neutrality on matters of faith, of not favoring one religion over another.”

Neal Katyal, the lawyer defending the 94-year-old memorial, said the cross “is no ordinary cross,” but had a secular meaning. On its base are four words, “Valor, Endurance, Courage, Devotion.” Added Katyal, “Not a single word of religious content appears anywhere.”

Justice Elana Kagan, who is Jewish, explained the cross to Katyal: “I mean, it is the foremost symbol of Christianity, isn’t it? It invokes the central theological claim of Christianity, that Jesus Christ, the Son of God, died on the cross for humanity’s sins and that he rose from the dead. This is why Christians use crosses as a way to memorialize the dead.”

And yet, Orthodox Jews find themselves in alliance with supporters of the Maryland cross. What the Orthodox and the Christians have in common is a shared instinct for what is sacred, a “higher law” that the Founding Fathers and Lincoln often invoked.

The question is, Stern told us, whether religion to be “treated like everything else, subject to the same rules, or whether it is given special exemption. There’s a certain amount of hypocrisy or situational inconsistency on both sides, but these are the well-intentioned arguments. There are those who trade epithets, charging that one side is trying to breach the church-state wall or suppress religion; I’ve been hearing that for more than 40 years. The epithets are good for fundraising. They’re not good for analysis. These are genuinely hard issues, deep seeded differences about the place of religion in society.”

The population is changing, too, Stern noted. The “nones” (people who have no particular religious belief or affiliation) are now 25-30 percent of the population, not the 3 or 5 percent of the 1970s, “and they’re newly assertive,” said Stern. “That’s a huge difference.”

Religion litigation has increased, said Stern, along with government becoming increasingly present in our lives. “Government funds and regulates things that were not funded or regulated a century ago. When you couple that with the massive changes in religion, or the rejection of religion, it’s not surprising that we’re having these battles. I wish that people who are not traditionally religious were more tolerant of people who are, but if I lived in a Bible Belt state I would probably have other concerns.”