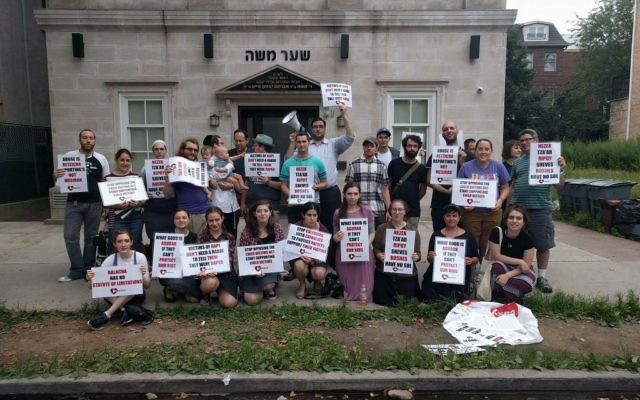 Protestors demonstrating in front of the synagouge of the Noveminsker Rebbe. Courtesy Asher Lovy/Zaakah

In a bid to turn up the pressure on Agudath Israel of America over its policies towards sexual abuse victims, activists and abuse survivors protested Sunday in front of the Novominsker shul in Borough Park, the second such protest this summer.

About 30 protesters — including at least 10 of whom said they were abused as children — spent nearly three hours demonstrating their frustration with Rabbi Yaakov Perlow, one of the leaders of Agudath. The charedi umbrella group is one of a few organizations in the Jewish community that has strongly objected to the Child Victims Act, a bill that would increase the statute of limitations for sex crimes committed against minors in New York State. Other groups opposed to the bill include the New York State Catholic Conference and the Boy Scouts of America; they argue that increasing the statute of limitations would expose them to potentially crippling legal bills.

Currently, a victim of childhood sexual abuse can bring charges or a lawsuit until the age of 23. The bill would extend that period until a survivor’s 28th birthday for felony criminal charges and until age 50 for civil cases. It also includes a one-year window to revive old cases. 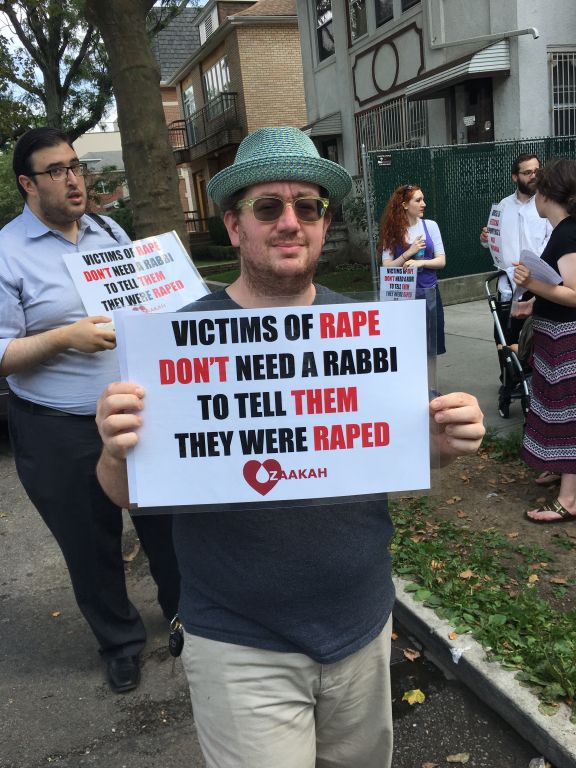 Upper West Side Assemblywoman Linda Rosenthal, introduced the bill in the Assembly, where it passed. Midtown state Sen. Brad Hoylman sponsored it in the Senate where it was never voted on, marking the 11th year in a row that the bill has stalled.

Protesters in Borough Park held signs that included “Abuse is Murder” and “Victims Don’t Need Rabbis to Tell Them That They Were Raped.”

Protestor Yonah Kohn, 35, a father of four who grew up a few blocks away from where this protest was being held, told The Jewish Week that he was abused — by multiple people — from age 12 to 14.

“I know it takes a really long time for a lot of people [to come forward with allegations of abuse],” he said. “It took me well over 20 years, and there is a lot of pain in not being able to seek justice when you’re finally able to find your own voice.”

Kohn, who was raised in the chasidic sect of Bobov and now lives with his family in Marine Park, said that when he reported his abuse to his rabbi, the rabbi slapped him in the face and told him in Yiddish, “We don’t talk about such things.”

Asher Lovy, 25,  a survivor of abuse and who grew up in Borough Park and who organized the protest, believes that these protests are crucial to keep the bill alive. 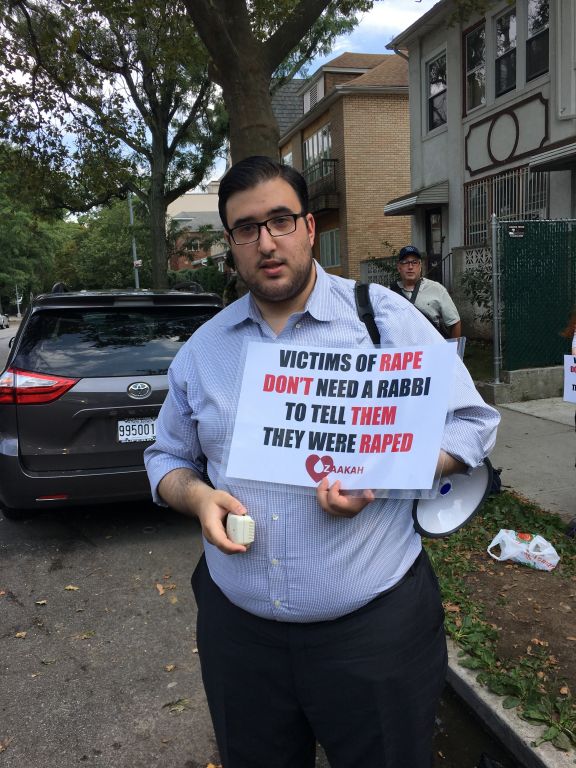 Asher Lovy, 25, organizer of a series of protests against Agudah. Chaim Levin/JW

“We don’t have a Child Victims Act yet because all of the public efforts are focused only during the few months in the legislative session after the budget [is passed] and before [the session’s] close,” he said. “We can’t continue just making the issue public when it feels most gratifying, and when it will get the most attention. We need to constantly keep this issue in the public eye.”

In a statement provided to The Jewish Week, Agudah spokesman Avi Shafran said, “Agudath Israel’s position is a matter of record. We are committed to fighting abuse and protecting the community’s children. But we also oppose the retroactive abolishment of the statute of limitations on civil suits against institutions.”

The statement continued: “The Novominsker Rebbe is one of the most respected, and rightly so, religious leaders of the Orthodox Jewish world; and he is exquisitely sensitive to the pain and needs of victims of abuse. He deserves only respect from all Jews.”

Lovy, in a fiery and emotional tone, led the protestors in chants, including “Abuse is Retzicha,” or murder, and “Reporting is not Mesirah.” (Mesirah is the halachic term for the prohibition against reporting crimes to secular authorities).

While most local residents were reluctant to speak with the media, some locals, including children, were watching the protesters with curiosity. As cars passed by, protesters handed out flyers that listed their reasons for protesting Agudah.

One local chasidic man, a father of six who wouldn’t provide his name, told The Jewish Week that he was skeptical of the protestors’ efforts. “I think they’re overdoing it,” he said. Asked if he believes that the current laws should be changed, he said he has no faith in the American justice system, which he believes is broken in all kinds of ways. 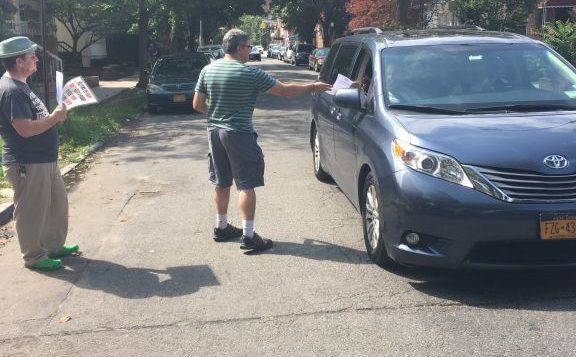 He said has more faith in the religious courts and believes that when cases of abuse happen in chasidic communities, they are handled well internally. “In every community, if there’s someone who is not acting the way they’re supposed to be acting, they get pushed out very fast.”

Whether to try to handle allegations of abuse inside the community or urge people to take their allegations to law enforcement, is an ongoing point of contention in charedi communities.

Another local, an 81-year-old woman named Devorah, heard the chants from her home and joined the protest. “This [abuse] happens here in this neighborhood,” she told The Jewish Week.

Lovy, the protest’s organizer, is working on a third demonstration for early September, perhaps in front of the Novominsker Yeshiva. “I want his students to see how little their rosh yeshiva cares about their safety,” he said, referring to Rabbi Perlow.