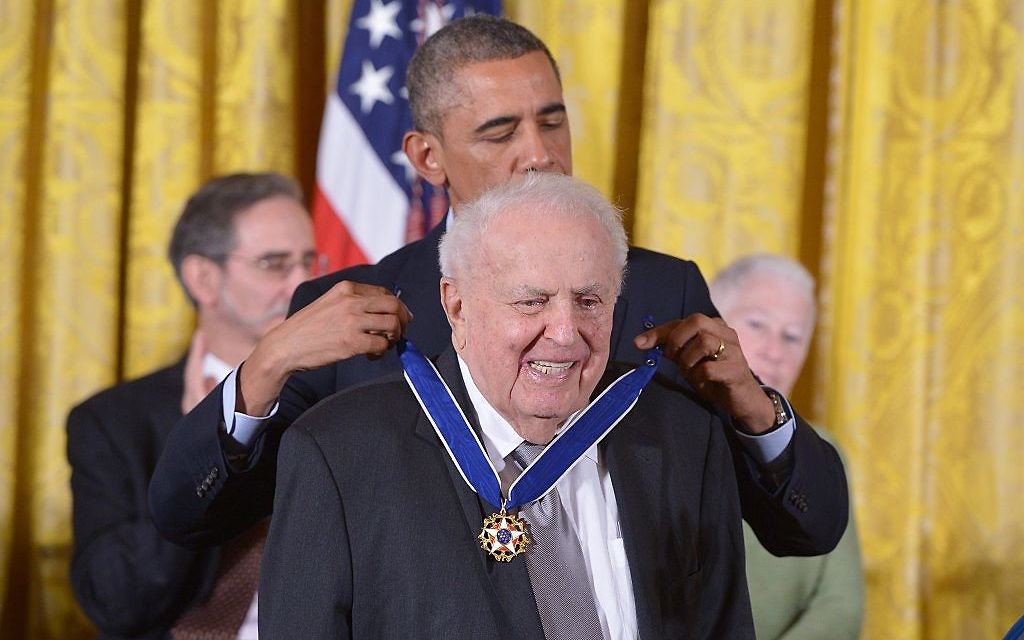 Abner Mikva, a liberal Democratic legislator from Chicago who served in prominent positions in the three branches of government and mentored a young Barack Obama, helping to introduce the future president to leaders of the Jewish community, died July 4 of bladder cancer at Rush University Medical Center in Chicago. He was 90.

President Obama said in a statement that Mr. Mikva, who was a member of the House of Representatives and the Illinois General Assembly, White House Counsel to President Bill Clinton, and a federal judge, “represented the best of public service himself and he believed in empowering the next generation of young people to shape our country.”

After Obama graduated from Harvard Law School in 1991, Mr. Mikva, then on the federal Court of Appeals for the District of Columbia, offered him a job as a clerk. Obama declined the offer, deciding to become a community organizer in Chicago. The two remained friends, Mr. Mikva encouraging Obama to consider a career in public service.

Mr. Mikva brought Obama into his circle of like-minded, liberal Jewish friends, said Jeremy Ben-Ami, president of J Street, the Washington-based “pro-peace, pro-Israel” advocacy group of which Mr. Mikva was a “quintessential supporter. He wanted to ensure that his strongly held Jewish values were reflected in a healthy U.S.-Israel relationship and a safe and flourishing Israel.”

Ben-Ami, who met Mr. Mikva while serving as the White House’s deputy domestic policy advisor, said Mr. Mikva and his associates did not concentrate on Israel and Middle East politics during their meetings with Obama, but would discuss a wide variety of Jewish political and social issues, both domestic and international.

Those meetings “had an influence on [Obama’s] thinking regarding Jewish American politics,” Ben-Ami told the Jewish Week in a telephone interview. “His take” on the positions that many Jewish Americans held on various matters, including Israel, were formed “very much by people like Ab Mikva. He was embraced by parts of the Chicago Jewish establishment [who] held the first fundraiser for him.”

While Obama has drawn criticism from parts of the Jewish community during most of his presidency, particularly from right-wing supporters of Israel, for showing insufficient support for Israeli policies in the Middle East peace process, people like Mr. Mikva tended to back the positions advocated by J Street, Ben-Ami said. “The president has said that it surprised him that the voices that speak for the Jewish community on a wide range of issues are not more like Ab Mikva.”

When people in the Jewish community expressed concern about an Obama administration’s policies in the Middle East, Mr. Mikva said Obama would be “the first Jewish president in the U.S. He has a yiddishe neshama [Jewish soul].”

Ben-Ami called Mr. Mikva “the best we are as a people.”

In 1997, Mr. Mikva and his wife founded the Mikva Challenge, an organization that encourages young people in the inner city to become active in politics.

Obama awarded Mr. Mikva the Presidential Medal of Freedom in 2014.

Obama said Mr. Mikva, who mentored many young Democratic politicians, including Chicago Mayor Rahm Emanuel and Supreme Court Justice Elana Kagan, “saw something in me that I didn’t yet see in myself … the nation “owe[s] a profound debt of gratitude to those who gave us those first, firm pushes at the start. For me, one of those people was Ab Mikva.”

Mr. Mikva, who in Congress worked to outlaw all privately owned handguns, winning him the enmity of the National Rifle Association, recently lobbied for the Senate to consider the nomination of Supreme Court nominee Merrick Garland.

Born in Milwaukee to a Yiddish-speaking family of émigrés from present-day Ukraine, Mr. Mikva was a volunteer for Illinois’ Sen. Paul Douglas and Gov. Adlai Stevenson, later serving as an aviator in the Army Air Corps. He graduated from the University of Chicago Law School, later teaching there and at Northwestern University.