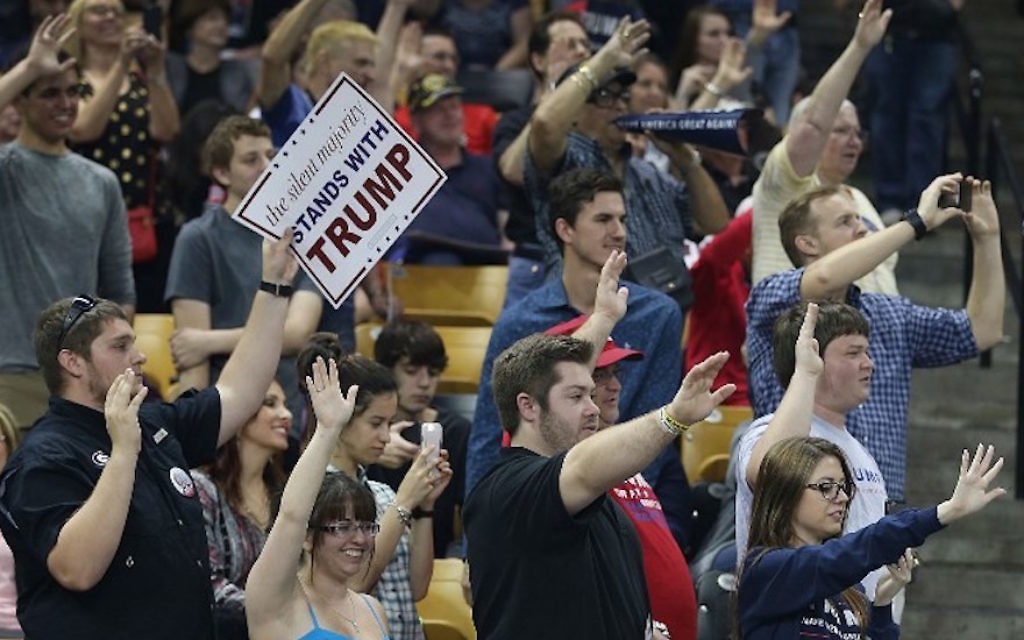 Donald Trump knew he was evoking fascist symbolism when he asked supporters at a campaign rally in Florida to raise their right arms and pledge to vote for him, former Anti-Defamation League leader Abraham Foxman said.

The salute at a rally Saturday for the front-running Republican presidential candidate prompted a backlash on social media, where comparisons to Hitler were rife.

“It is a fascist gesture,” Foxman told the Times of Israel news website on Sunday. “He is smart enough — he always tells us how smart he is — to know the images that this evokes. Instead of asking his audience to pledge allegiance to the United States of America, which in itself would be a little bizarre, he’s asking them to swear allegiance to him.”

At the rally at the University of Central Florida’s arena in Orlando, Trump said: “Raise your right hand. I do solemnly swear that I — no matter how I feel, no matter what the conditions, if there’s hurricanes or whatever — will vote, on or before the 12th, for Donald J. Trump for president.”

Hands went up throughout the audience amid loud cheers and a recitation of the “pledge.”

Foxman, a Holocaust survivor who was saved from the Nazis by his Catholic nanny, told the Times of Israel that Trump’s ability to motivate his supporters to make such symbolic gestures is disturbing.

“As a Jew who survived the Holocaust, to see an audience of thousands of people raising their hands in what looks like the ‘Heil Hitler’ salute is about as offensive, obnoxious and disgusting as anything I thought I would ever witness in the United States of America,” he told The Times of Israel.

“We’ve seen this sort of thing at rallies of neo-Nazis. We’ve seen it at rallies of white supremacists. But to see it at a rally for a legitimate candidate for the presidency of the United States is outrageous.”

Foxman also said: “I think he was intoxicated with all the things that he’s already got away with, and it led him to this. This is the summit of his own intoxication with what he perceives as his leadership quality.”

Foxman also asserted that the David Duke chapter in the Trump saga was manufactured.

“He is a man of the world. Even though he proclaims he doesn’t know who David Duke was, or the other white supremacists, we know very well that he knows. So he’s playing to an image,” he said.

On Feb. 28, Trump responded in contradictory ways to being endorsed by Duke, a former Ku Klux Klan leader, and said on CNN, “Just so you understand, I don’t know anything about David Duke, OK?” Later in the day, the ADL said it would provide Trump and the other Republican and Democratic candidates with information on extremists and hate groups. Trump has disavowed the endorsement several times since the CNN program.

Foxman, who retired as head of the ADL last year after nearly three decades at the helm, told the Times of Israel he finds it even more troubling that Trump appears to appeal to so many American voters. He also believes that Trump will not make it all the way to the White House.

“I think the American people are rational and reasonable at the end of the day,” Foxman said. “And I think that if the intoxication we are seeing continues, more and more people will realize that this is not a person that they want to be led by.”