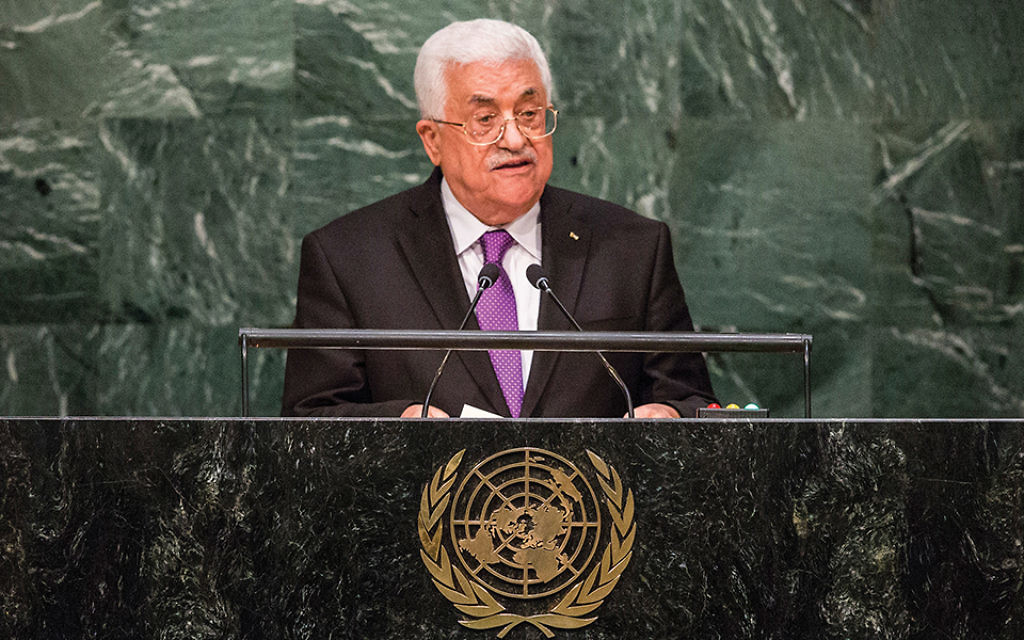 Instead, there was the familiar refrain that the Palestinians will not abide by the Oslo Accords because Israel is not. As a result, Abbas said, Israel must “fully assume all its responsibilities as an occupying power … our patience for a long time has come to an end.”

He added that Israel has created “an apartheid regime” in the West Bank while destroying chances for a two-state solution.

“It doesn’t mean much,” said Avraham Sela, a Middle East scholar and professor emeritus at the Hebrew University of Jerusalem.

“What it means is that he was crying to the international community for support,” he said. “His political situation is extremely dire. He is pressured by Islamic organizations at the same time he is moving nowhere in negotiations [with Israel]. And this stalemate is convenient to the Israeli government because it can continue to build settlements … while tensions on the Temple Mount increase.”

Tensions on the Temple Mount, which houses the al-Aqsa mosque and is the site of the first and second Temple, have increased since Rosh HaShanah after Israeli authorities found that Palestinians had stashed armaments there.

But Abbas maintained that Israeli “occupying forces” had entered the site and prevented Muslim worshipers from praying — something he said that could lead to an “implosion” in the region and turn a political conflict into a religious one.

The Israeli government has repeatedly insisted that it is simply trying to maintain the status quo on the Temple Mount and that it is Palestinian extremists who want to bar all Jews from visiting.

But Sela, a harsh critic of the current Israeli government, said: “The status quo is changing all the time. Once upon a time, there was only a small group of dreamy people who thought of rebuilding the Temple there. Nowadays, there are a huge number of people who talk and plan for the rebuilding of the Temple. … This is an explosive area and the Israeli government knows and does nothing.”

Gerald Steinberg, a political science professor at Bar-Ilan University, agreed that Abbas’ comments were simply a “rehash of what he has said before — there was nothing different or earth shattering.”

“He says all the time that if things don’t change, he will abandon the Oslo framework but he has no interest in doing so because he has no idea what would come afterwards,” Steinberg said. “He is a very weak leader in Palestinian terms who is not taken seriously. He gives fiery speeches but he does not want to get into a fight with Netanyahu, otherwise he may be pushed out and Hamas would take over. So Netanyahu and other Israeli politicians respond by saying how radical Abbas is and they play this game.”

Abbas also knows that without Israel’s help, he would not now be in power, pointed out Abraham Diskin, a professor emeritus in the political science department at the Hebrew University.

“Without Israel, Hamas would have overtaken the entire West Bank,” he said. “But to demonstrate that he is really a Palestinian nationalist, he smears Israel. It is very unfortunate because if one believes there is a two-state solution, that is definitely not a way to achieve it. And those who pay the price for his unwillingness to move forward are the Palestinians. It’s very unfortunate but that’s the way it is.”

In his speech, Abbas claimed Israel “continues to refuse permits for our people to build in occupied east Jerusalem, at the same time that it intensifies its decades-long campaign of demolition and confiscation of homes, displacing Palestinian owners and residents under a multi-pronged policy of ethnic cleansing aimed at pushing them away from their ancestral homeland. In addition, orders have been issued to deport elected representatives from the city of Jerusalem. The occupying power also continues to undertake excavations that threaten our holy places, and its military checkpoints prevent our citizens from getting access to their mosques and churches, and it continues to besiege the Holy City with a ring of settlements imposed to separate the Holy City from the rest of the Palestinian cities.”

Yair Lapid, a former Israeli finance minister and current head of the Yesh Atid Party, told a meeting here of the Israel Policy Forum that Abbas' comments were not a speech but rather “a defamation, a set of lies from a person who instead of acting like a leader chooses to incite.”

Lapid said also that it is in Israel’s national interest to separate from the Palestinians “because the continuation of the current situation threatens our existence as a Jewish state. Israel cannot allow itself to absorb 3.5 million Palestinians because that threatens everything that is important to the continued existence of the Jewish state — it threatens the Jewish majority in Israel, it threatens the character of the State of Israel, it threatens our continued existence as an advanced western state, it makes it harder for us to fight the terrorism on our borders.”

He said the country’s “strategic goal needs to be a regional agreement which will lead to full and normal relations with the Arab world and the creation of a demilitarized independent Palestinian state alongside Israel.”

Steinberg said there is a “distinct possibility of some political process starting” with the Palestinians that would involve inviting opposition leader Isaac Herzog to join the government.

“There are issues that could be strong enough to support an interim agreement,” he said.