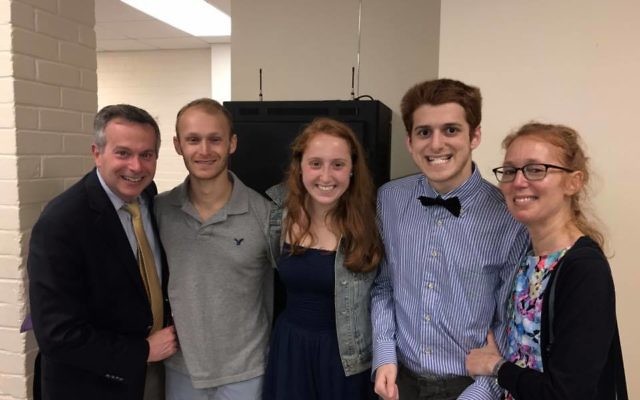 The author and her family. Courtesy of Ariel Gold

My older brother Noah is autistic. Currently, he is completely dependent on me and the rest of my family. I was so very proud–and also scared–to see Noah, at age 21, graduate from high school last week. For the past few years, Noah’s education has been focused more on job training than in-class learning, to help ready him for the “real world.” Now that Noah’s extended school career has come to an end, my parents are faced with an important question: What now?

During the the 2016 presidential campaign, I vocally and passionately protested Donald Trump, and all that he stood for. I was asked many times, mostly by my peers, why I cared so much. “It’s not like any of the changes he makes will actually affect you.” I was told. Oh, how my classmates couldn’t have possibly been more wrong.

Although Noah is currently able to stay under my family’s health insurance plan until he is 26, thanks to President Obama, he will eventually be supported by Medicaid, instead.

The recent article ‘Medicaid Cuts In Wisconsin Would Undermine Training For Adults With Disabilities’ explains why Medicaid cuts concern families like mine:

“President Trump and Republicans in Congress want to restructure the way Medicaid is funded. Instead of paying for all the medical care and services beneficiaries need, the health care bill Republicans passed through the House last month would grant each state a fixed sum per beneficiary based on what the state has spent in the past. That per-capita allowance would increase over time, but at a slower rate than health care costs generally rise. So the Congressional Budget Office estimates that Medicaid funding under the plan would be 25 percent less in 10 years than it would be under current law. ‘We’re no longer going to measure compassion by the number of programs or the number of people on those programs but by the number of people we got off those programs,’ White House Budget Director Mick Mulvaney said. While Medicaid is best known as a health care program for poor people, more than 80 percent of its budget goes to care for the elderly, children and people with disabilities, according to the Kaiser Family Foundation. Only 15 percent goes to health care for able-bodied adults, the people that Mulvaney was likely referring to in his remarks.”

While I agree that the government does need to reduce its spending, targeting society’s most vulnerable population is not the way to do it. President Trump’s proposed budget cuts to Medicaid are nothing short of immoral. Regardless of where you stand politically, we, as human beings, should all be against any sort of legislation that hurts the disabled, like my brother, Noah.

Organizations like Our Place in Wisconsin provide crucial job training, in addition to occasional social excursions for the disabled. In all likelihood, a very similar organization will be providing Noah with these kinds of services in the future. Hopefully, Noah will be able to use some of his government aid to afford programs like these, that can help him improve as both a worker, and as a person.

Mahatma Ghandi said, “A nation’s greatness is measured by how it treats its weakest members.”

Ironically, Trump’s motto is “Make America Great Again.” Based on his proposed Medicaid budget cuts, it’s as if his intention is to accomplish the opposite.

Ariel Gold is a high school student who lives in the New York Metropolitan area.