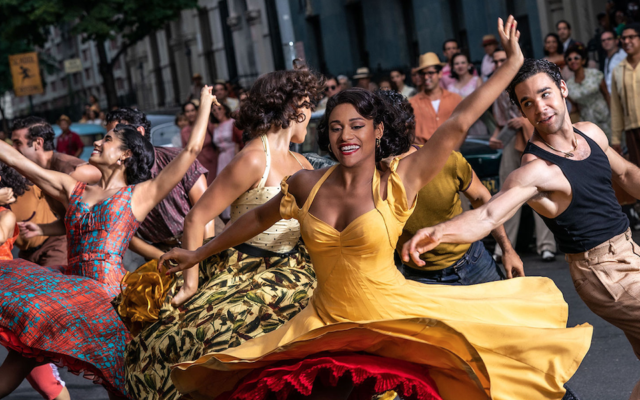 A scene from Stephen Spielberg's 2021 version of "West Side Story," which has a screenplay by Tony Kushner. (Amblin)

I first saw “West Side Story” in elementary school, when the first film version made its debut on network television. (This was decades before the VCR, when a television broadcast was about the only way to see a movie that had already left theaters, even yers earlier.) I remember the last scene, with Maria sobbing over the body of the slain Tony, and thinking, “If only everyone could see this movie, then people would stop hating and killing each other.”

The next day at school, boys divided themselves into Sharks and Jets, and started “rumbling” during recess. The principle had to go on the loudspeaker and warn us that fighting during lunchtime would not be tolerated.

So much for world peace.

It wouldn’t be the first time I misread the musical or how it would be perceived by others.

I’ve always loved “West Side Story,” and thrilled to what is famously the creation of four Jewish men: composer Leonard Bernstein, lyricist Stephen Sondheim, choreographer Jerome Robbins, and book writer Arthur Laurents. I’ve seen it in various revivals, watched the film more times than I can count, and spent a memorable night at Tanglewood watching the film accompanied by a live orchestra. I couldn’t imagine anyone not recognizing it for the masterpiece that it is.

And then I read the objections of various Puerto Rican and Latino writers and critics. In a New York Times essay last year , the Puerto Rican writer and translator Carina del Valle Schorske complains about the musical’s “stereotypes of macho teenage gangsters and hysterical lovers.” She and others remain aghast that the musical reduces the complex story of Puerto Rican migration to the United States and New York City in particular to a mere theatrical device. She notes that little about the film – the accents, the music, the choreography – is true to Puerto Rican traditions.

Others remain hurt that many of the lead roles in the film, as they did on Broadway, went to non-Latino actors, in brown-face yet: Natalie Wood as Maria, George Chakiris as Bernardo. Yes, Rita Moreno won the best supporting actress Oscar for her portrayal of Anita, an accolade that can make the film’s creators and fans feel better about themselves only in hindsight.

There is also the question of who gets to tell a story – a question that is front and center as Steven Spielberg is about to release his own version of the musical, with a script by another Jewish-American, Tony Kushner. Spielberg is treading very carefully not to be seen as co-opting the Puerto Rican narrative, telling an interviewer that he “really wanted to tell that Puerto Rican, Nuyorican experience of basically the migration to this country and the struggle to make a living, and to have children, and to battle against the obstacles of xenophobia and racial prejudice.” He has consulted with Latino cast and crew and held a listening session at the University of Puerto Rico with students and faculty.

That session demonstrated the disconnect between how a white American Jew like me and a native Puerto Rican can perceive the same work of art. To me, the “America” dance and song have always been a triumph, a matchless melody wedded to brilliant lyrics and heart-stopping choreography. When Anita sings, “Puerto Rico, you ugly island, island of tropic diseases / Always the hurricanes blowing, Always the population growing / And the money owing, And the babies crying / And the bullets flying” – I hear it as an immigrant’s self-justification for a difficult move, and as a corrective to the rosy memories of her friends.

But as the film critic Mario Alegre told Spielberg, the lyrics were always hurtful to Puerto Ricans like him, and all the immigrants who left the island out of economic necessity. “The musical always presented it like, ‘Screw the island. I love America.’ But every time there’s been a massive migration from Puerto Rico, it’s been over economic austerity,” said Alegre. “The musical never explained that it was out of necessity.”

In the same listening session, Kushner blamed the lyrics on the Jewish roots of the show’s creators, whose ancestors were driven out of a Europe that few looked back on fondly. “They’re using the Jewish immigrant experience, the notion that you look back where you came from and go ‘yech,’” he explained.

I always felt the musical was deeply sympathetic to its Puerto Rican characters, who are cooler and more put-upon than Tony and his mixed gang of white ethnic hoodlums.

And there, in a nutshell, is the way even well-intentioned art can hurt and divide. I always felt the musical was deeply sympathetic to its Puerto Rican characters, who are cooler and more put-upon than Tony and his mixed gang of white ethnic hoodlums. The anti-Puerto Rican sentiment of the time is embodied in the rank racism of Lieutenant Schrank, and the musical is an unmistakable appeal to accept brown immigrants as part of the American fabric. “Puerto Rico’s in America!” is the last, defiant line of “America.”

Clearly a lot of Latino viewers don’t see it that way. Spielberg has his work cut out for him, and has enlisted Moreno, who stars in his film as a newly written character, as an executive producer and collaborator. Moreno said she was helping to “fix and ameliorate” the “whitewashing” of the original film, and “I think they have done an incredible job.” Kushner has already won high praise for capturing the African-American experience in the current Broadway revival of “Caroline, or Change.”

With any luck, Spielberg’s “West Side Story” will make the musical sing for a new era, and the film’s release will allow us to acknowledge both the genius of the original show and how change begins with listening to other’s voices.